No old men in science country 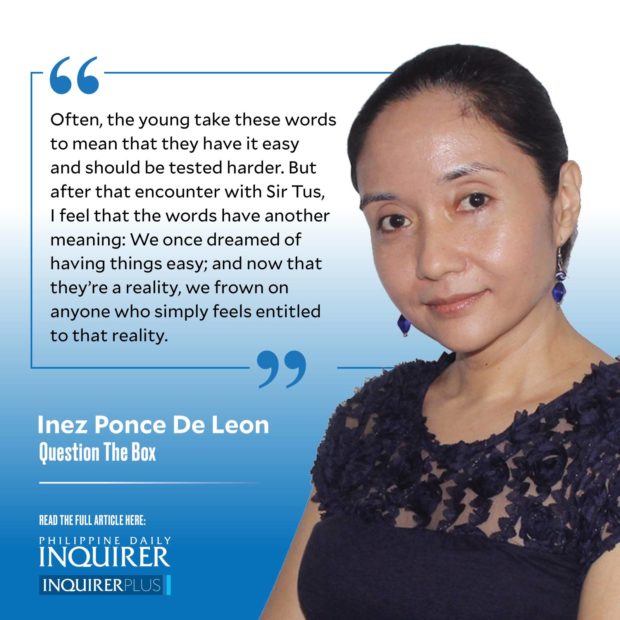 Last week, I visited a colleague, friend, and reader at the 3rd Philippine Symposium on Freshwater Biodiversity and Ecosystems, which was held at the Ateneo. Professor Augustus “Tus” Mamaril is known to many. He has been published in the Inquirer, and is friends with luminaries such as Randy David and Butch Dalisay. When I was a molecular biology and biotechnology undergrad in UP Diliman, I avoided enlisting in his classes because of his reputation as a “terror prof.” I sometimes saw him when I want to the bio side of campus as a graduate student and instructor; but I never formally knew him until just this year, when he wrote to me and introduced himself as one of my readers.

When we finally met, it was as though we had been friends for years. He introduced me to his fellow scientists, and we talked briefly about politics and the elections. But what really struck me was a conversation we had as we descended the stairs so that he could return to the conference venue.

He talked about his childhood. He had always been a campus journalist: He won awards for his work in copyreading and sports writing, was fond of creating opinion pieces, was slated to embark on a career in journalism. But college cost a lot, and the only scholarships left were for the sciences. He had to go for zoology because it was what would help him get a degree.

And then something happened that I had never expected. The tears welled up in his eyes.

“I wish that I was able to do what you are doing now, blending the sciences with writing,” he said, voice breaking, “I’m so happy that you are able to do it, because I wish that it was something that I could have done.”

It was a drastic change from the scientist that I had spoken with minutes earlier. Sir Tus could point to people and talk about their names, birthdays, and degrees with both ease and humor. His countenance brightened whenever he talked about his research work, and how he was helping new researchers navigate the uncertain world of the academe.

The tears, the broken voice—I felt them echo in my heart as we paused on the landing, and as I gave him a quick hug.

I had never seen Sir Tus so vulnerable; and yet, I’m glad I did, because it also allowed me to speak up in his defense.

“But, sir,” I said, “You write! You even got published in The New York Times! I’ve never been able to do that!”

“Oh no,” he insisted, “You’re really following your dream. I wish I could have done what you are doing because that was my dream, too.”

I’m paraphrasing much of this from memory, but what emerged was not the image of an old man looking back on his life with regret. It was that of a sage scientist looking at the future and seeing that what he once thought was a mere dream was now reality. It was true to the nature of science itself: No knowledge is ever complete, no dream is ever to be dismissed, no wild idea is ever ridiculed.

My students often roll their eyes when we, of a certain age, start our sentences with “In my time…” But really, we used to have libraries that had miles of books, so that our background research took weeks to finish. We had to line up at dawn to get the class schedules we liked. We had to deal with multiple deadlines without the luxury of any form of consideration.

Often, the young take these words to mean that they have it easy and should be tested harder. But after that encounter with Sir Tus, I feel that the words have another meaning: We once dreamed of having things easy; and now that they’re a reality, we frown on anyone who simply feels entitled to that reality. We once wished we could get all the books we wanted, so don’t use the internet to download lies. We once wished we had all the convenient classes, so don’t spend your time complaining about the classes you get. We once wished we had flexible deadlines, so don’t take your teachers for granted.

When Sir Tus and I parted ways, I tried not to cry. I recognized that I had allowed one man to see that his childhood dream was now a career for generations of scientists to come. That same man saw the next generation not as one to be scorned, demeaned, or envied, but as a bringer of hope.

One day, I will be in that same position, and I hope to still be a scientist filled with all the joy of youth and wonder.