Luzon jars: The allure of luxury 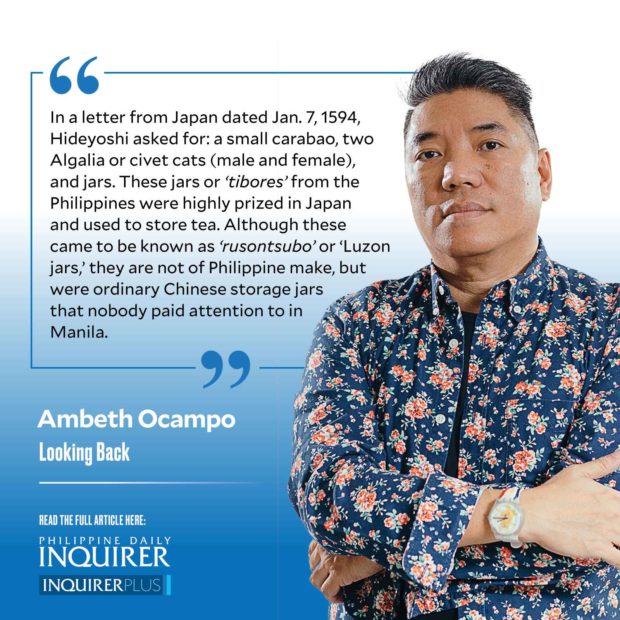 The 75th anniversary of the establishment of diplomatic relations between the Philippines and Spain obscures a history that goes back five centuries. Diplomacy was practiced from Manila during the Spanish colonial period, that is, long before people could even imagine the Philippines as the free and independent nation we have today. It is not well known that one of the earliest Spanish diplomats in the Philippines was a Franciscan friar, Pedro Bautista, who died in service in 1597. Beatified in 1627 and canonized in 1862, he is now known as San Pedro Bautista, one of the 26 martyrs of Nagasaki. While San Pedro Bautista was the most prominent among the martyrs at the time, the official church memorial highlights the Japanese Saint Paul Miki, thus relegating Bautista to oblivion as just one of the other martyrs. Bautista is further obscured by the Filipino martyrs Lorenzo Ruiz and Pedro Calungsod. We often assume that history is about remembering, when it is also about forgetting.

Spanish governor general Dasmariñas sent two embassies to Japan: the first, headed by the Dominican Fr. Juan Cobo; the second, headed by the Franciscan Fr. Pedro Bautista. Cobo’s diplomacy fended off the threat of a Japanese invasion of Manila in 1592. He presented Toyotomi Hideyoshi with an assortment of gifts that included an elephant. Unfortunately, Cobo did not make it back to Manila. He was killed in Formosa, making him the first Spanish ambassador killed in service in Asia. What I found interesting were the gifts presented by the second embassy to Hideyoshi as detailed in the correspondence of Pedro Bautista.

In a letter from Japan dated Jan. 7, 1594, Hideyoshi asked for: a small carabao, two Algalia or civet cats (male and female), and jars. These jars or “tibores” from the Philippines were highly prized in Japan and used to store tea. Although these came to be known as “rusontsubo” or “Luzon jars,” they are not of Philippine make, but were ordinary Chinese storage jars that nobody paid attention to in Manila. In October, Bautista reported that only three of the cats arrived alive. This was offset by the number of carabaos that increased because the female gave birth en route. The inventory of gifts included:

“A Spanish court dress or ‘bestido’ of carved velvet, background in crimson and yellow satin, trimmed with handrails and silver and gold from Castile, lined the back of crimson velvet … Two pairs of blue and white stockings. Four rich handkerchiefs with chains and points. A red hat, trimmed with silver handrails, with a braid and feathers, and for the medulla a large, rich golden eagle, enameled with six medium emeralds and a large one … Some colored feathers, eight velvet rods of the bestido … A strong dagger, well dressed, with a gold chain for a garter. Two carabaos, male and female. Two sighthounds from Monteria, with their necklaces, well adorned with their silver shells. Five ‘tibores.’ Twelve small boxes, and a barrel. A jug of olives and two jugs of Castilian gift wine. Five civet cats.”

Hideyoshi took three of the five jars, and the remainder was distributed tactfully by Bautista to the most prominent and influential at court. Some enterprising Japanese merchants sourced Luzon jars and became rich overnight, but not for long. Bautista reported:

“The Japanese who brought jars last year became very rich; but all his joy turned to tears and his wealth to poverty … Now they tell me that the King has ordered, under pain of death, that no one bring jars but only Faranda and Funguen, to whom he has given badges so that they can take care of the ships that are to go to Manila, and no one will go without their license.”

Fascinated by these Luzon jars, I have been researching on those that are still extant in Japan with provenance or a trail of ownership going back to the 16th century. What is it that transformed these ordinary storage jars into highly prized items deployed as diplomatic gifts? How come the jars that remained in the Philippines did not become highly prized Luzon jars? Rusontsubo should be studied to understand the allure of luxury, it also made me curious what President Marcos Jr. recently presented as gifts to the Asean heads of state.