A triumph of justice | Inquirer Opinion

A triumph of justice 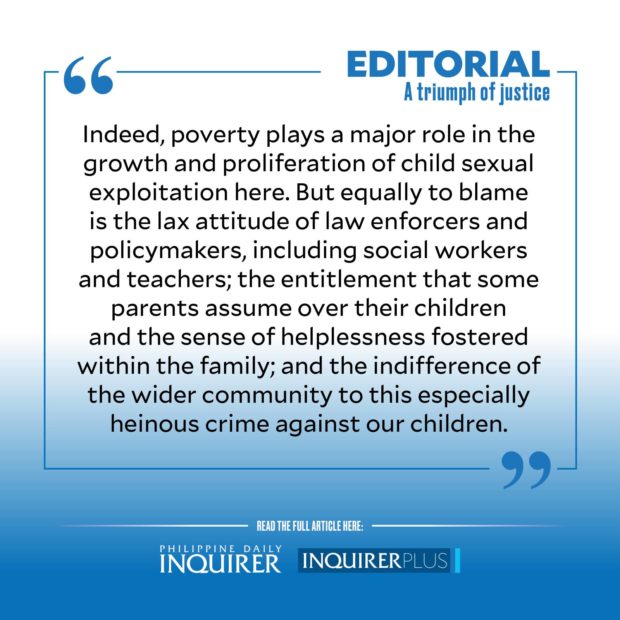 Viewed from afar, a photo of Australian Peter Gerard Scully, 59, shows a white-haired individual who seems harmless and humbled, considering that he is standing while handcuffed amid a crowd of policemen.

But when his sentence issued by a court in Cagayan de Oro city is perused, the impression immediately shifts. According to news reports, Scully, along with three local cohorts, was convicted of “qualified trafficking in persons, syndicated child pornography, child abuse, rape, and photo and video voyeurism.”

Seven child victims, including one who was just 18 months old at the time, were cited by the court, although it is entirely possible that many more fell into this pedophile’s hands. Indeed, according to Regional State Prosecutor Merlynn Barola-Uy, Scully and his coaccused admitted to having committed 60 cases of attempted trafficking in persons, child abuse, and sexual assault, which will be processed in a separate trial.

Among the incidents included in this second set of cases is the death of a child whose remains were found buried in the kitchen of a house in Surigao City where Scully once lived.

The Australian national was sentenced to 129 years in prison for his offenses against children, most of which occurred in the cities of Surigao, Malaybalay, and Cagayan de Oro in 2012. Sentenced along with Scully were his three co-conspirators, including Lovely Margallo, his alleged girlfriend, who was sentenced to 126 years; Alexander Lao, a taxi driver who also drove for Scully; and a certain Maria Dorothea Chia.

A news report in this paper noted that in 2018, Scully was meted life imprisonment, along with his previous live-in partner, Carme Ann Alvarez, for the first batch of cases. Both are now serving their respective sentences at the Davao Prison and Penal Farm in Panabo City, Davao del Norte.

Scully was arrested in Bukidnon in 2015, after the Dutch government reported that Scully was broadcasting videos of child abuse and sexual exploitation to clients in Europe. Testimonies of witnesses said the incidents of abuse were filmed and uploaded on exclusive pornography websites, with payments collected via money transfer.

A Department of Justice (DOJ) report said Scully and his partner “would photograph and/or film or take videos of minors while being naked and while performing sexual acts either by themselves, or with other children, and/or with Scully and/or Margallo.”

Often, the report said, the exploitation of the children would be done under the guise of adopting the youngsters, “supposedly taking good care of them, feeding them and sending them to school. Instead, the said little ones were exploited, abused and molested.”

Although Scully and his clientele were foreigners, Filipinos are not exactly innocent and blame-free in this serial crime. Aside from Scully’s coaccused, equal scrutiny must be trained on others who facilitated the abuse of the children, including the parents of the children themselves.

Note, too, that Scully’s operations were and are but one of perhaps hundreds of such schemes in the country. Officials have earlier acknowledged that the country has become a major source of explicit materials catering to pedophiles around the world, putting Filipino children at risk.

Justice Secretary Jesus Crispin Remulla has declared that “we will not accept that this will continue in our country.”

Disturbing indeed is the fact that, according to the United Nations Office for the Coordination of Humanitarian Affairs in 2020, the COVID-19 pandemic “facilitated a dramatic rise in OSEC (online sexual exploitation of children) cases.”

Save the Children Philippines, also in the same year, expressed concern over the steep rise in online sexual abuse and exploitation against children. DOJ data showed a 264.6 percent increase during the enhanced community quarantine implemented from March to May 2020, with 202,605 reported cases, representing a sharp rise from the 76,561 reported in 2019.

Indeed, poverty plays a major role in the growth and proliferation of child sexual exploitation here. But equally to blame is the lax attitude of law enforcers and policymakers, including social workers and teachers; the entitlement that some parents assume over their children and the sense of helplessness fostered within the family; and the indifference of the wider community to this especially heinous crime against our children.

Scully’s record-breaking sentence is a triumph of justice for the innocent lives needlessly lost and ruined, and may deter many others tempted to follow in his footsteps. But unless more stringent measures are taken to punish perpetrators and protect our children, the scandal may even grow to unimagined proportions.