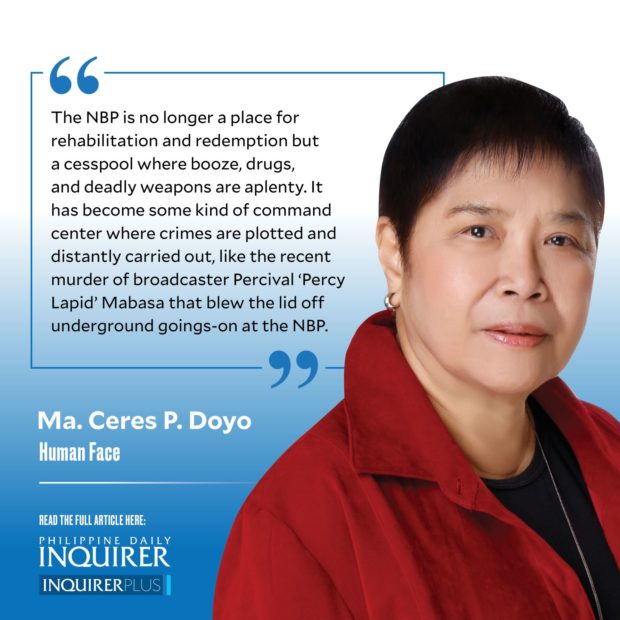 For three years during the COVID-19 pandemic and after, sari-sari store owner Ermesina Dimas had not received word from her husband Juancho, who had been in the National Balibad Prison for five years. So when she received a letter from prison authorities requesting her to come and identify her husband’s remains, she lost no time. Her husband died of pneumonia a month ago, the letter said.

Erme had expected Juancho to rot in prison. He had been an abusive husband and father to his and Erme’s five children. There was no way she would take him back if and when he would be released, she had told relatives and neighbors repeatedly. Her children agreed.

Juancho was convicted for being part of a drug trafficking operation. All Erme knew was that he was caught fishing out from the open sea off Pangasinan a package that turned out to contain high-grade meth. Juancho was a tricycle driver and part-time fisherman who seldom came home with enough catch. That big catch of his turned out to be his last.

“Look at the photographs of these dead prisoners,” the jail warden told Erme so casually, like he has been doing it often. “See which one looks like your husband. This way, you do not have to look at the 170 dead prisoners in the funeraria, a mountain of them there.”

Erme looked at the photos of the dead one by one. After some 20 minutes, she pointed at one. “This looks like him, number 121. I can easily identify him. The man has a tattoo of an anchor on his right arm and a hidden part of his body. He had dreamed of being a seaman, but…” Erme’s son, Juancho Jr., confirmed it was his dead father’s photo.

Off they went to the Southeast Funeral Homes nearby, accompanied by the warden and a guard who was at the wheel.

The funeraria assistant brought out Cadaver No. 121. It was on some kind of gurney, not a coffin. Erme let out a soft gasp. She looked at the dead man’s lower arm just above his right hand and, sure enough, there was an anchor tattoo. She looked at the tag tied on the man’s big toe. On it was a Chinese name of three syllables, not Juancho Dimas.

“Sir, why does the tag have a Chinese name?” Erme asked. “This dead man is my husband, Juancho. What does it say on your list, sir?”

“Oh, ah, ah, just a slight error perhaps. So many cadavers from prison, you know. Good thing he did not die of COVID-19, otherwise he would have been cremated immediately.”

While the warden and guard were out of the room talking to the funeral parlor assistant, Juancho Jr., with his cell phone, took photos of the cadaver in prison garb and the name tag that had a Chinese name on it. He immediately shoved the cell phone into his pocket.

The warden asked the funeral parlor assistant to remove the name tag on the cadaver. “This is a mistake, a mistake, so sorry,” he muttered while putting the tag in his vest pocket.

“Are you in school, young man?” the warden asked Juancho Jr. “What course?”

“Yes, off and on, sir. Working student. I want to become a policeman, sir. ”

“Do not worry,” the warden assured Erme and Juancho Jr. “Now that he has been identified, we will arrange with the funeral parlor to prepare his body for cremation. Do you agree? No expense on your part. Just between us, okay? Promise?” He smiled and winked.

Erme and Juancho Jr. looked at each other and nodded.

“Here is my number,” the warden said. “Let us know when you will be back to get his ashes. Please, no word about the wrong name tag.”

Folks, that is just a product of my imagination. I deny making any allusions to real life. But not imagined is the fact that in a Muntinlupa funeral parlor there are, right now, 178 unclaimed cadavers of inmates of the New Bilibid Prison (NBP) who died of various causes (but not of COVID-19) in the last couple of years. Justice Secretary Jesus Remulla wants that autopsy be performed on all of them. Each cadaver would have a story to tell.The NBP is no longer a place for rehabilitation and redemption but a cesspool where booze, drugs, and deadly weapons are aplenty. It has become some kind of command center where crimes are plotted and distantly carried out, like the recent murder of broadcaster Percival “Percy Lapid” Mabasa that blew the lid off underground goings-on at the NBP.