Collateral damage to the coalition 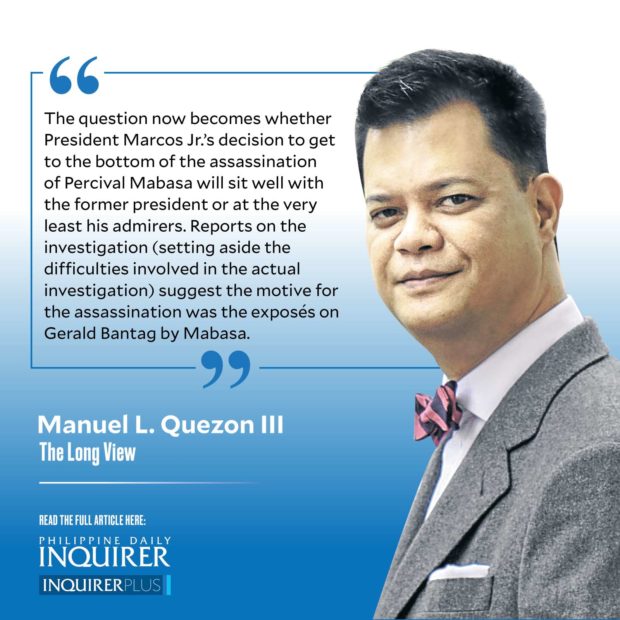 The Asia Sentinel, that online but old-school uncompromising surveyor of all things Southeast Asian, recently published a report by its correspondent on the assassination of Percival Mabasa, better known to his audience as Percy Lapid. The correspondent suggested two things. The first was on whether President Marcos Jr. was serious about getting to the bottom of the liquidation. The correspondent quoted the opinion of “an expatriate country-risk analyst with long experience in Manila” as saying, “From everything that I’ve been told, Marcos is serious about going after those responsible for this killing. This will be a big test and challenge. He needs to keep the US onside so I suspect that he will do whatever is necessary to resolve this.” The second was another opinion: “It’s more likely,” the correspondent wrote, “that authorities dug into the Lapid case because he was one of the capital’s most prominent radio journalists, and because the murder occurred in Manila, not the hinterlands.” By way of supporting proof, the correspondent mentioned that Ray Blanco, another radio journalist, was stabbed to death on Sept. 18, but it hasn’t become a media sensation. It happened in Negros Oriental (I’d add: the murder of Benharl Kahil, a teacher and cartoonist, in Sultan Kudarat, has likewise been reported but not as avidly seized on by the public or media itself).

The Asia Sentinel report appeared the day before the government filed murder charges against Bureau of Corrections officials starting with its (suspended) director general, Gerald Bantag, his “right-hand man,” deputy security officer Ricardo Zulueta, and others. The secretaries of justice and interior and local governments were front and center, making appeals for the accused to surrender to the authorities: at least one online vlogger had taken the secretary of the interior to task for being too eager to hog the spotlight, which led to the identity of the middle man being revealed—providing an opportunity for the middleman’s liquidation.

Still, the charges have been filed. Two conspiracies basically took place: the first, to assassinate Mabasa, and the second, to liquidate the middleman, Jun Villamor. The remaining drama seems to be whether the accused will surrender to the authorities or remain in hiding. At one point, Bantag reportedly protested his suspension, saying the current chief of the Philippine National Police ought to have been suspended, too, since three prisoners were killed in Camp Crame and former senator Leila de Lima was taken hostage and nearly killed.

But it’s gotten a lot more serious now. Bantag has had, to put it mildly, a controversial career. When former president Rodrigo Duterte appointed Bantag Bureau of Corrections chief, Esquire Philippines diplomatically described him as “neither a saint nor a soldier,” while it headlined his facing 10 counts of homicide. Referring, in frustration, to Bantag’s predecessor, the disgraced Nicanor Faeldon, Duterte said he couldn’t find a saint, but trying a military man failed; so he might as well try someone with experience in the jail system. Senator (and, lest we forget, essentially acting president from 2016-2022) Bong Go once chirpily suggested that the president needed to hire a “killer,” but when the actual (multi-accused of killing) Bantag was appointed, clarified that ”Bantag is not a killer.” (A joke goes that Bantag indeed isn’t a killer—he just asks for killers to be hired on his behalf.) The Mabasa family lawyer is more circumspect: Bantag is the mastermind according to the evidence; it would be speculative and not borne out by evidence so far, to suggest there may be higher-ups involved.

Bantag was one of former Duterte’s last appointments before the pre-election appointments ban (March 28 to May 8) kicked in: he was directly appointed director general on March 9 of this year. He is therefore the former president’s and not the current president’s, guy. The question now becomes whether Mr. Marcos’ decision to get to the bottom of the assassination of Mabasa will sit well with the former president or at the very least his admirers. Reports on the investigation (setting aside the difficulties involved in the actual investigation) suggest the motive for the assassination was the exposés on Bantag by Mabasa. But if one glances at the comments in the loyalist-DDS networks, there seems to be some dissatisfaction with the (current) President’s resolve, and choice for a (temporary, for now) replacement for Bantag. Bantag himself has been reported as commenting that the President was unwise and naïve to appoint retired general Gregorio Catapang since he was a former Reform the Armed Forces Movement rebel (against Marcos Sr.) and appointed Armed Forces of the Philippines chief of staff before the Duterte era. In merry connect-the-dots fashion, it’s more than enough to propose a conspiracy involving framing Bantag.