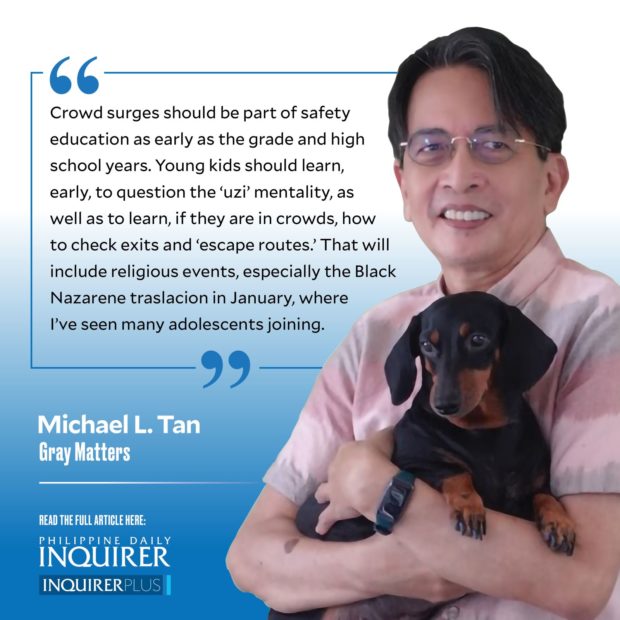 Crowd crush. Crowd surge. These are fairly new terms that were splashed all over mass media following several such tragedies in Indonesia, India, and South Korea.

We know from historical records such disasters have been going on for centuries, with as many as 10,000 in the temple of Jerusalem in 66 AD.

Religious pilgrims and devotees tend to be confident that they are protected when they participate in such events or that dying during the pilgrimage is to be blessed.

The Seoul Halloween crowd surge was unique in history in that it was not one event but simply a night out of people, mostly young, having fun in an entertainment district. The Philippines, too, was unique in 2006 with a crowd surge at the Ultra, killing 73, mostly poor people hoping to participate in a TV variety show, “Wowowee,” and a chance to win raffle prizes.

The older term “stampede” is being discouraged because it suggests irrational mobs behaving like herds of wild animals and contributing to each others’ deaths, but media accounts tend to omit historical records that do describe human valor, people trying to calm crowds and bring in some order, people helping each other, especially women and children.

We forget that especially in our modern times, we have numerous events—rallies, sports events, rock concerts, and yes, religious meetings especially involving huge crowds of several thousands that are swept up emotionally and mentally in a frenzy but are still able to enter and leave the event without injuries or death.

Crowd surges play on the human factor from panic to businesses wanting to maximize revenues, the more people the better. There is corruption, government regulators turning a blind eye to breaches in safety standards for space capacities.

It’s time we include the risks of crowd surges in schools as part of disaster management. At the tertiary level, we need to include crowd behavior and its challenges for professions like engineering, architecture, health, and criminology/criminal justice. Social scientists should look more into crowd behavior, starting with the “uzi” (slang for a kibitzer) mentality pushing Filipinos to rush into a crowd without thinking of its risks, the larger the crowd the merrier.

Crowd surges should be part of safety education as early as the grade and high school years. Young kids should learn, early, to question the uzi mentality, as well as to learn, if they are in crowds, how to check exits and “escape routes.” That will include religious events, especially the Black Nazarene traslacion in January, where I’ve seen many adolescents joining.

If a crowd crush does break out, we need to know how to move toward the exits, and avoid walls because that’s the worst place to be trapped against. Safety strategies are important even for queuing and riding the LRT or MRT, where crowds can be huge.

We need to know how to handle the ultimate risk in crowds: falling. The worst thing is to fall on our stomach, and to have others fall on top of us, which compresses our respiratory system, causing death. We’re advised to fall to our side, crouched in a fetal position, to increase chances that we can avoid compression and continue breathing.

You can visualize now how all these prevention measures should be going into drills as we do for earthquakes and fires and that this can be done in the early grades in schools. I saw but lost a TikTok video showing such a drill in a grade school in China. But do look up the New York Times article, “What to do in a crowd crush” (10/30/22), for other good advice.

For our risk communications and advisories, I suggest we use the term “crowd surge.” Stampede, I’ve explained, is a misnomer. Crowd crush is graphic and could be used but I tend to think of “candy crush” and other kinds of crushes. Crowd surge, for risk communications, resonates for Filipinos given our memories of the storm surges with Supertyphoon “Yolanda” (Haiyan) in 2013.