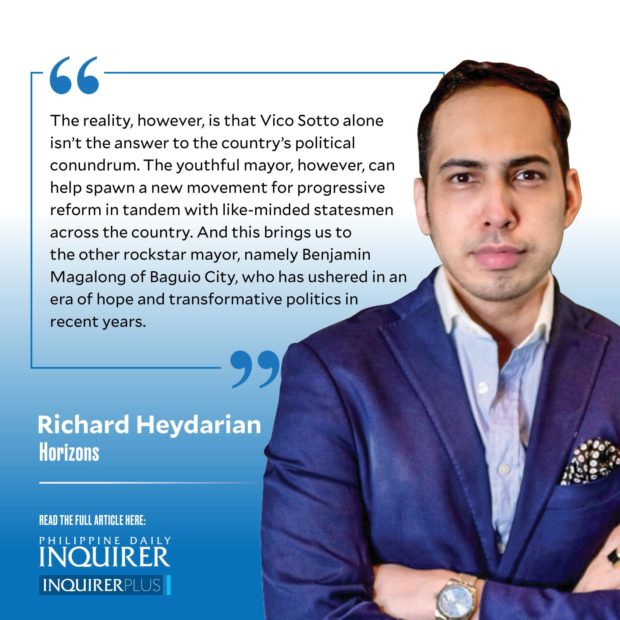 Apparently, months earlier Vico Sotto relinquished his prized position as an executive vice president at the AD party amid growing disagreements over the trajectory of the historically progressive party.

To dispel speculations over any potential personal rift or factional politics, the twin banes of Philippine party politics, the charismatic mayor made it crystal clear that his fateful decision was not driven by “any particular person or candidate” per se, but instead some unspecified “recent events” convinced him that the party was “headed towards a different direction” than he originally envisioned.

Founded by the late senator and education secretary Raul Roco, Aksyon Demokratiko has prided itself in standing as one of the main advocates of grassroots-driven and honest governance—a “third way” out of the polarized, intoxicatingly partisan, and incorrigibly oligarchic nature of mainstream parties.

It remains to be seen where will AD head under the stewardship of former mayor Francisco “Isko” Moreno Domagoso. Despite a strong start, his presidential candidacy and “centrist” agenda struggled to maintain momentum in arguably the most polarized elections in Philippine history.

Desperately seeking to appeal to various constituencies across the political spectrum, Isko’s swiftly evolving policy positions were seemingly all over the place. An 11th-hour communications meltdown with former vice president Leni Robredo’s camp sealed the deal. Vico’s resignation from the party was almost certainly influenced by this emotionally charged and politically distressing political backdrop.

“We need stronger political parties so that politics no longer becomes personality-based,” Vico clarified when asked about his preferred vision of party politics. Over the past four years, the charismatic mayor consistently displayed his commitment to place ideological conviction over political expediency. The COVID-19 pandemic revealed his steely character and unshakable commitment to upholding the interests of his constituency against all odds, including a mini-showdown with former president Rodrigo Duterte over pandemic-related restrictions.

Undoubtedly, the Pasig City mayor now stands as one of the country’s main hopes for progressive transformation. The reality, however, is that Vico alone isn’t the answer to the country’s political conundrum. The youthful mayor, however, can help spawn a new movement for progressive reform in tandem with like-minded statesmen across the country. And this brings us to the other rockstar mayor, namely Benjamin Magalong of Baguio City, who has ushered in an era of hope and transformative politics in recent years.

Under the stewardship of the former top law enforcement official and corporate chief, Baguio City, my hometown, is gradually embracing a new model of governance altogether, which rejects traditional politics in favor of good governance. As Magalong told me, he envisions a “sustainable, smart, green city,” which adopts and adapts best practices from all around the world.

“Every time you come up with a strategic plan, it has to be data-driven and science-based. It can’t be based on gut feeling,” Magalong added, proudly stating how Baguio is “the first city in the entire country that has a Smart City Command Center, the first of its kind in [the Philippines].”

Under his master development plan, the country’s summer capital is developing a low-carbon urban transport system, surveying and protecting heritage sites, embracing responsible tourism, and adopting nature-based solution to urban challenges. His is a refreshingly hopeful vision of a Baguio for the 21st century.

Both Vico and Magalong, not to mention countless other (less known) local officials across the country, stand as a testament to a quiet yet potentially seismic shift in Philippine politics: the rise of competent and courageous local government officials, who place good governance above partisan politics. Yes, dear reader, there is hope in our beloved country.