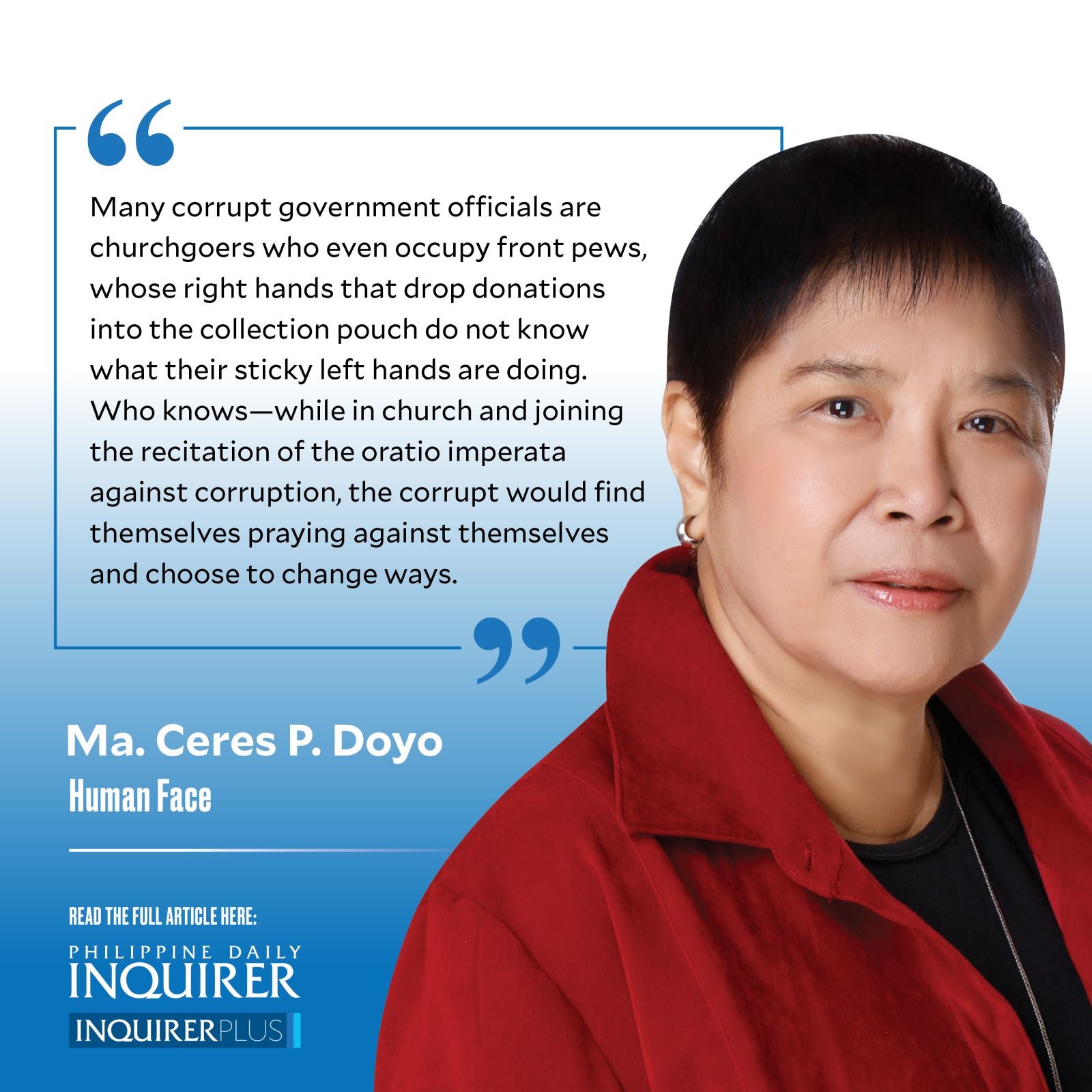 I noticed that, even as the COVID-19 pandemic is softening its deadly impact hereabouts and seems to be on its way out, the oratio imperata after Masses in Catholic churches continues to be recited. For almost three years, the “Oratio Imperata for Protection Against COVID-19” was recited as a prayer in English and many Filipino languages, so that it has almost become part of the Mass (online and face to face) and was nearly memorized by those who attend Mass often.

It is a prayer of supplication to God that the COVID-19 virus that had already claimed countless lives the world over would spare those who remain in this valley of tears. Special mention are the health frontliners who serve, and the scientists who work to discover a cure, a weapon to fight the deadly scourge that humankind had to face in this 21st century.

“Oratio imperata” is Latin for obligatory prayers. They are short prayers that church authorities may ask the faithful to recite publicly, especially in time of grave danger and calamities, in the hope that God would deign to listen and avert potential harm to the community. We’ve had such prayers in the past, but only for short periods and while waiting for expected super hurricanes to blow over. Such situations brought to mind the biblical scene of how Jesus calmed the storm at sea while his bumbling bunch of disciples—they of little faith—screamed with fear that turned to awe.

Category 4 typhoons that brought flash floods, sea surges, landslides, and wreaked havoc on the environment and food-producing fields, have been part of our lives. Add volcanic eruptions, earthquakes, and man-made calamities that are the result of over-quarrying, unregulated mining, deforestation, garbage, etc.

The man-made ones do not seem to qualify for an oratio imperata, but why? And speaking of man-made, why not corruption as well?

This thought was percolating in my mind this past week while the Federation of Asian Bishops’ Conferences is in Thailand for a two-week meeting. If I remember right, it was during the Marcos dictatorship and the dark martial law years that the Asian bishops popularized the “preferential option for the poor” theological imperative that was spawned in Latin America and later took root in Asian shores. I would like to believe that the churches in Asia were never the same after that. But I digress.

With that in my mind, I was wondering why the other major scourges that bedevil this woebegone nation of ours do not deserve an oratio imperata. For a change, why not an “Oratio Imperata Against Corruption”? That would be a smooth segue from “Oratio Imperata for Protection Against COVID-19” that people have been reciting these past pandemic years, the anni horribiles.

The prayer should be composed in a way that highlights corruption as a Category 5 calamity that wreaks havoc on our lives and livelihoods, a deadly virus that infects many in government positions, a festering disease that needs a cure, if not divine intervention. It must also include a plea for the protection of those who expose the evil, the truth tellers (journalists among them) and whistleblowers especially, who risk life and limb so that light may penetrate the dark recesses of government agencies where corruption thrives.

I mention divine intervention because the scourge of corruption is bigger than us, like a so-called perfect storm.

Many corrupt government officials are churchgoers who even occupy front pews, whose right hands that drop donations into the collection pouch do not know what their sticky left hands are doing. Who knows—while in church and joining the recitation of the oratio imperata against corruption, the corrupt would find themselves praying against themselves and choose to change ways.

So, bring it on! But not to use fire and brimstone, or threats of hellfire and damnation in the afterlife, as these could sound pharisaical and turn off people. Only gentle reminders that turn the focus on the most affected—the poor and the marginalized—so that those who commit grave wrongs in high places would change their ways. Because with divine intervention goes divine justice and retribution, even in this life.

From the back pew, I say, if caught and proven guilty, no mercy. But, hey, you say, why are they walking around in the august halls of the legislative?