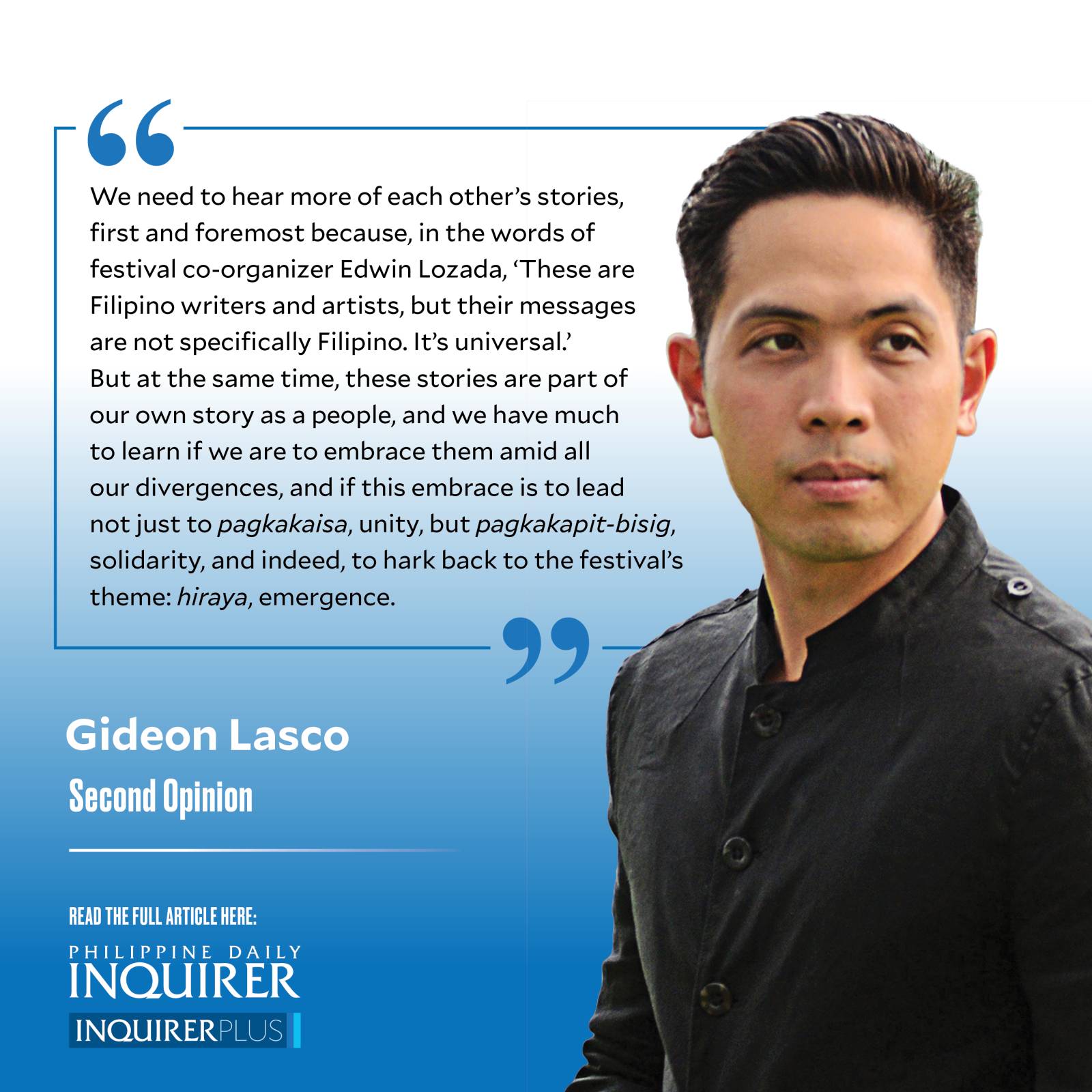 San Francisco—Over the weekend, I attended the 6th Filipino American International Book Festival, where I was one of the invited authors from the Philippines, alongside the children’s book publisher Ani Rosa Almario and baybayin calligrapher Ian Lucero. Aside from the chance to share my own book, “The Philippines Is Not A Small Country,” I saw my participation as an opportunity to learn more about Filipino American literature and the experiences that they convey.

Like the food and drinks we partook throughout the festival—e.g., lechon kawali, bibingka, calamansi juice—some of the topics and themes were drawn from the Philippines. For instance, in her powerful keynote speech, Gina Apostol directly addressed our political conundrums by reflecting on the idea of revolution, and some of her lines are worth quoting at length:

“Only a few lead comfortable lives in the Philippines … it is a small minority whose lives are threatened with change. But it is also they whose myth-making and golden promises manufacture majority consent to their violence and their greed … It is satisfying to blame the voters, but is a problematic response to fascism’s power. I lay the blame unequivocally on the structural oppression that has produced the voters’ economic condition, which leads them to the desperate hope that Marcos will, with his absurd and incredible lies about his family’s Tallano gold, lift them out of despair.”

For her part, Meredith Talusan—who delivered her speech in Tagalog—underscored the importance not just in taking pride in our local languages, but in teaching it to the next generations: an appeal perhaps more poignant here in America, but no less relevant in the Philippines.

But like lumpia that has become more of a Filipino American than Filipino food, there are also themes that are distinctly Fil-Am. For one, questions of racial identity and marginality understandably suffuse their writing, as when Barbara Jane Reyes laments, in her “Letters to a Young Brown Girl”:

They will say, your language lacks finesse, your words low.

They will form air quotes with their white fingers,

say something clever about color. Past struggles and activisms come to life through the participants and their performances—from the legacy of Larry Itliong, who alongside Cesar Chavez led Filipino and Mexican farm workers in fighting for their rights in the 1960s, to the memory of Amado Khaya Canham Rodriguez, an Oakland-born activist who lived and worked with the Mangyan communities in Mindoro before his untimely death at age 22 during the height of the pandemic in 2020. Their stories remind me that Filipinos have actually been in the Americas at least since 1587, and have faced all kinds of injustice throughout the centuries, like the anti-Filipino riots in California in the 1920-1930s, and the anti-Asian violence today, even as their struggles do not figure much in the homeland’s imaginary of its diaspora.

And then, there is the theme of pagbabalikbayan, of returning to the Philippines to (re)discover one’s roots and reconnect with one’s family, which is both a personal experience and a literary trope in some of their works (e.g., Jay Reguero in Ribay’s “Patron Saints of Nothing” and Magsalin in Apostol’s “Insurrecto,” both of whom find themselves grappling with Duterte’s war on drugs).

We need to hear more of each other’s stories, first and foremost because, in the words of festival co-organizer Edwin Lozada, “These are Filipino writers and artists, but their messages are not specifically Filipino. It’s universal.”

But at the same time, these stories are part of our own story as a people, and we have much to learn if we are to embrace them amid all our divergences, and if this embrace is to lead not just to pagkakaisa, unity, but pagkakapit-bisig, solidarity, and indeed, to hark back to the festival’s theme: hiraya, emergence. We may identify with different demonyms (Filipino/a/x), hyphenations, time zones, and citizenships, but if we can all partake in each other’s experiences as in a pagsasalo-salo, we may yet recognize ourselves in a first-person plural, in which our pronouns are we, tayo, atin.