Why is the internet fostering ignorance? | Inquirer Opinion

Why is the internet fostering ignorance? 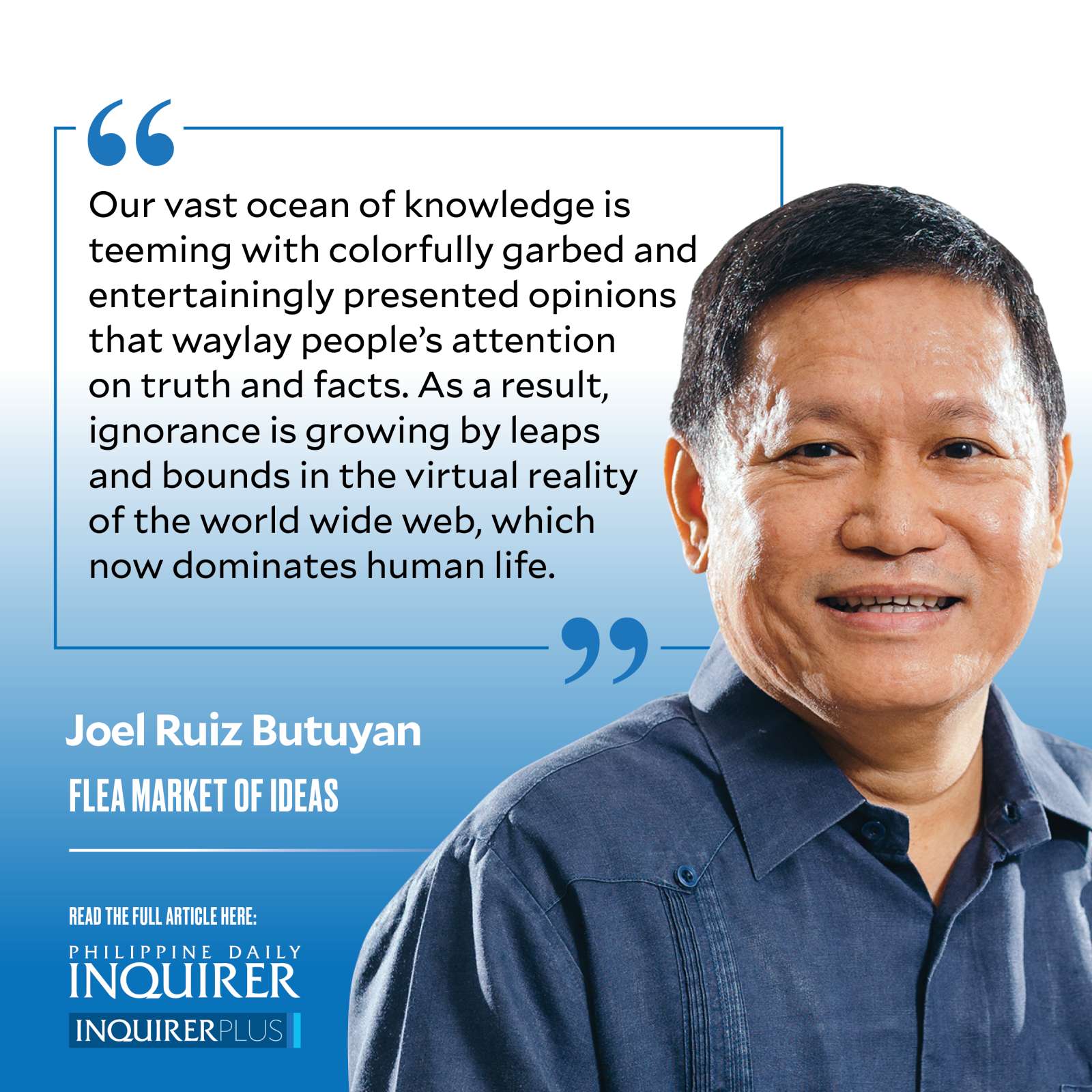 The absurdities of human civilization continue. Food production has increased in manifold proportions throughout history, but hunger remains a rampant malady. Wealth has multiplied in exponential numbers, but poverty prevails as a widespread malaise. And with the advent of the internet, the vast ocean of human knowledge has been unlocked and made freely accessible to everyone, but an epidemic of ignorance rampages as an affliction throughout the world.

Why is the internet fostering ignorance? There’s an abundance of reasons, but I will merely venture to expound on a couple of them because of space constraints.

Before the internet era, media and educational institutions had complete control of the floodgates of information. People received information from these institutions, which were bound by ethical standards to report truthful and unbiased information.

With the arrival of the internet era, media and educational institutions no longer have a monopoly of control over the floodgates of information. There’s now the option to bypass these gatekeepers and instead release information direct to the public through social media platforms. These led to the mushrooming of pseudo-journalists and media mercenaries who owe their allegiance not to ethical standards, but to commercial, political, and social interests or prejudices.

We’ve seen in two of our recent elections how political interests effectively co-opted media mercenaries and pseudo-journalists. What’s more disturbing is the revelation that even foreign countries are co-opting other countries’ media mercenaries to sabotage the national interest of unsuspecting countries. What Russia has been accused of doing to hijack political discourse in the United States, in order to favor former president Donald Trump and to destroy his opponents, has eerie similarities to what happened in our recent elections (Read “How Russian Trolls Helped Keep the Women’s March Out of Lock Step,” The New York Times).

The phenomenal growth of pseudo-journalists and media mercenaries has been aided by several factors. Unlike the traditional media, which dispenses information in comparatively tedious and boring formats, pseudo-journalists and media mercenaries disseminate information laced with entertainment elements or flavored with biases and beliefs that are appealing and attractive to interest groups.

The growth of pseudo-journalists and media mercenaries has also gained huge impetus from the emergence of “fast food” news. These are news information that are propagated in bite-size one-liners, photo-news, or short videos that are circulated on Facebook, Twitter, Instagram, YouTube, and TikTok. Like its counterpart in the literal food fare, “fast food” news sorely lack “nutritional” content that provide mental nourishment to its readers in order to enable them to form critical opinion and in-depth conclusions. These “fast food” news are stripped of context, contain adulterated facts, and marinated in hefty doses of bias and vested interest.

The traditional media is also greatly burdened with substantial expenses in maintaining offices, employees, and paying taxes. Media mercenaries and pseudo-journalists are hardly saddled with the same obligations because they operate in the shadows.

The marketplace of ideas is swarming with pseudo-journalists and media mercenaries, their size and influence amplified by trolls, and they’re drowning out the traditional media. They peddle truth and facts that are highly polluted with bias and prejudice. They promote vested interests cloaked as fair beliefs. Our vast ocean of knowledge is teeming with colorfully garbed and entertainingly presented opinions that waylay people’s attention on truth and facts. As a result, ignorance is growing by leaps and bounds in the virtual reality of the world wide web, which now dominates human life.

Looking at what’s happening to so many countries, the pandemic of ignorance fomented by the internet is threatening to cause havoc on humanity at levels more serious than the one caused by the current health pandemic. With democratic governments on the retreat and civil liberties being frittered away, the resulting resurgence of despotic, corrupt, and abusive governments—as well as the flourishing of human behavior harmful to community life—spell a step-back in the progress of human civilization.