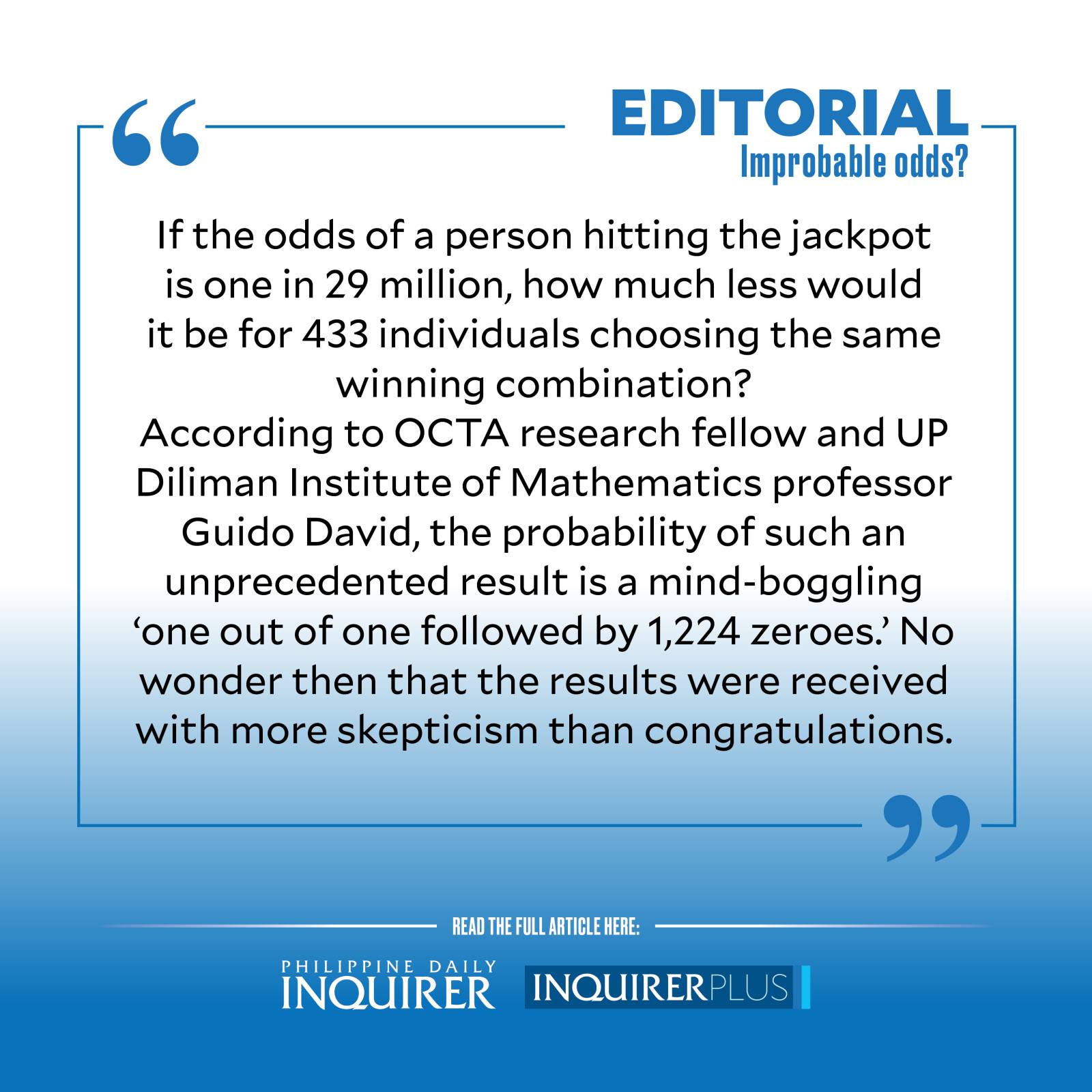 Oct. 1, 2022 will go down in history—or live in infamy—as the day when the most number of bettors beat astronomical odds and won the 6/55 Grand Lotto of the Philippine Charity Sweepstakes Office (PCSO), with the 433 winners getting P545,245.24 each after taxes, as their share in the P236-million jackpot.

That so many Filipinos instantly got richer because of the same winning combination of 09-45-36-27-18-54—all divisible by nine—was such an “extremely rare outcome” that it immediately triggered calls for a congressional investigation because of well-grounded fears that the fantastic results may have been manipulated.

This, despite the PCSO’s vigorous attempts to reassure incredulous Filipinos that the draw was aboveboard, even if the odds of winning the lottery is only one in 28,989,675, according to Peter Julian Cayton, associate professor at the University of the Philippines (UP) School of Statistics.

“Over the past 20 years, we had only two or three winners, but the general pattern of these numbers did not have a structure as compared to the most recent multiples of 9 in a result,” Cayton said.

So if the odds of a person hitting the jackpot is one in 29 million, how much less would it be for 433 individuals choosing the same winning combination?

According to OCTA research fellow and UP Diliman Institute of Mathematics professor Guido David, the probability of such an unprecedented result is a mind-boggling “one out of one followed by 1,224 zeroes.” No wonder then that the results were received with more skepticism than congratulations.

The PCSO, however, was adamant and sought to douse speculations of fraud, repeatedly stressing that “the conduct and result of every draw is very transparent and of utmost integrity.”

In a hastily called press briefing on Saturday, PCSO general manager Melquiades Robles contended that the winning combination may be a “freak,” but that the agency found no reason to doubt the results. There were that many winners because of the popularity of the number 9, he added.

But PCSO’s reassurances have so far failed to completely convince the public of the integrity of the Oct. 1 results, prompting House Minority Leader Marcelino Libanan to file a resolution on Tuesday directing the House committee on games and amusements to inquire into the “extremely rare outcome” of the 6/55 Grand Lotto draw.

Libanan cited the “urgent need” to “protect and ensure the integrity of PCSO’s lotto operations, considering their contributions to government coffers and to the economy,” with funds going, for example, to the public health programs of PhilHealth.

In the first half of this year alone, PCSO’s lotto operations brought in P25.92 billion in ticket sales, a surge of 32.15 percent from sales in the same period last year. The increased revenue is driven by the belief that bettors have a fair chance of winning, thus any suggestion of fraud that would drive away potential bettors is something that the PCSO can ill-afford.

Libanan echoed the earlier sentiment of Senate Minority Leader Aquilino Pimentel III who said there was “something suspicious” about 433 people winning the lotto when the “chances of winning is one in millions.” There was a need to investigate to “ensure the integrity of our games,” Pimentel added.

That it is taking a lot to convince Filipinos to accept the record results, even when almost half of the bettors have already claimed their winnings, may be due to past scandals that have heavily tainted the PCSO’s reputation.

In 1990, for example, the investigation into the Sept. 1 draw that was allegedly rigged ended with the top investigator himself, Brig. Gen. Alfredo Lim, winning the top prize just weeks later.

From 2008 to 2010, PCSO officials were accused of having diverted some P365 million of its funds to the intelligence fund, which is subject to far fewer restrictions and is widely seen as a slush fund for corruption. Former president Gloria Macapagal-Arroyo herself was charged with plunder, malversation of public funds, and graft in relation to the PCSO intel funds. She was ultimately acquitted by the Office of the Ombudsman in 2019.

Robles himself, whom Arroyo appointed as administrator of the Light Rail Transit Authority, was ordered arrested by the Sandiganbayan in 2017 for graft, along with 12 others, for alleged irregularities in a janitorial contract. The case was dismissed in 2019 for lack of evidence.

The PCSO continues to carry the stench of such headline-grabbing scandals, so it is incumbent on Congress to conduct a thorough investigation into its latest controversy, if only to put to rest any lingering doubts on the unusual Grand Lotto results.