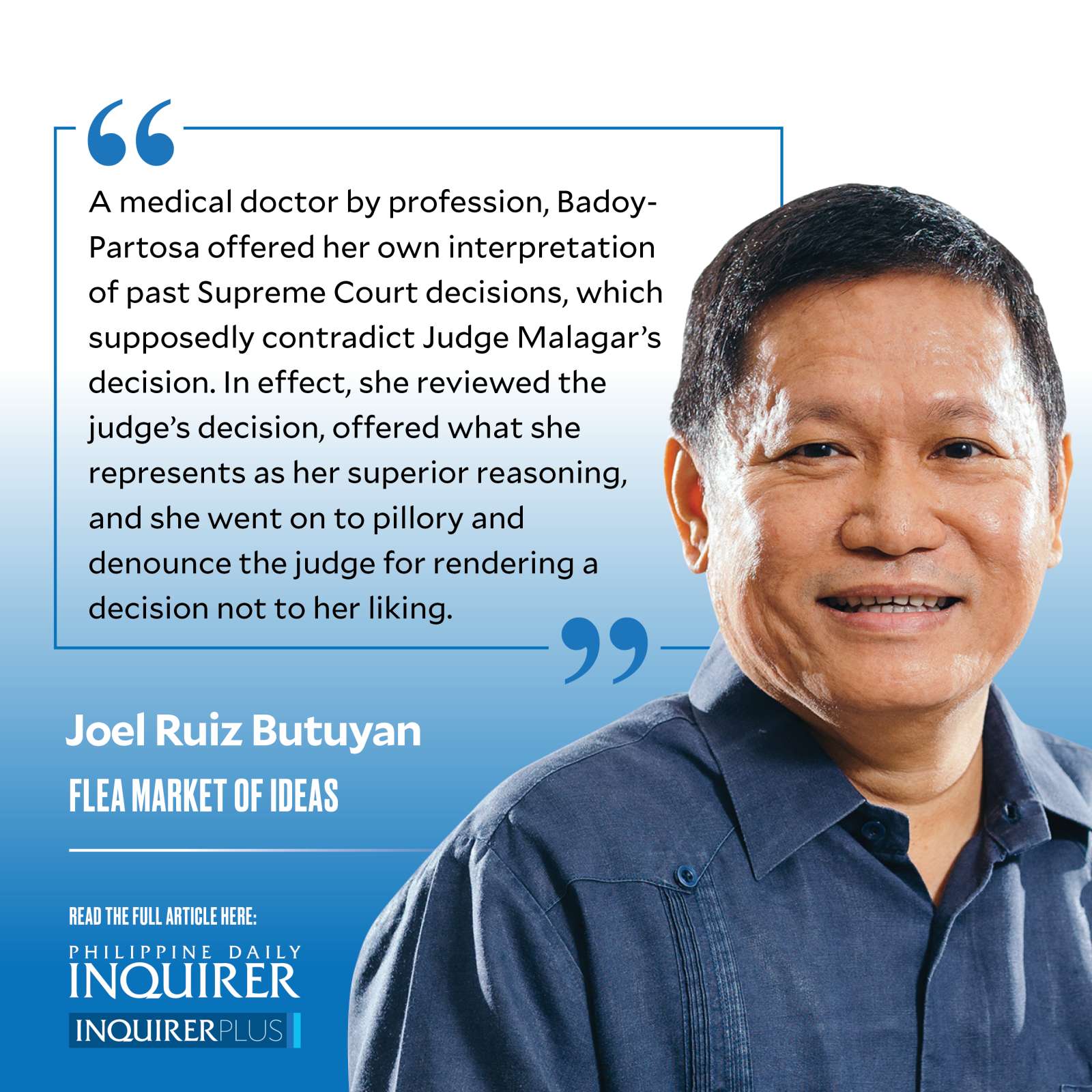 A rabid, anticommunist public official accuses a judge and her husband of being friends and allies of the communist armed movement. Instead, she ends up becoming the biggest propagandist who generates huge sympathy for the communist rebellion.

Lorraine Badoy-Partosa has been identified as a “former” high ranking official of the National Task Force to End Local Communist Armed Conflict (NTF-Elcac), the government agency created by the Duterte administration, tasked with the campaign to end the communist rebellion. It turns out, however, that even with the change of government, Badoy-Partosa remains a member of the NTF-Elcac as disclosed during budget deliberations in the House of Representatives two days ago. (“Lorraine Badoy still part of NTF-Elcac, says lawmaker, but can’t tell her exact designation,” Inquirer.net, 9/27/2022)

Badoy-Partosa caused a furor on social media, in the entire judiciary, and in the whole legal profession when she branded Manila Regional Trial Court Judge Marlo Magdoza-Malagar as a “friend” and “true ally” of the Communist Party of the Philippines-New People’s Army (CPP-NPA). This is after Judge Malagar rendered a meticulously reasoned out 135-page decision, dismissing the proscription case filed years ago by the Department of Justice (DOJ) that sought to label the CPP and NPA as terrorist organizations.

Reacting to Judge Malagar’s decision, Badoy-Partosa posted on social media the following: “So if I kill this judge and I do so out of my political belief that all allies of the CPP NPA NDF must be killed because there is no difference in my mind between a member of the CPP NPA NDF and their friends, then please be lenient with me.” Badoy-Partosa was also quoted as saying that she wants to build an organization which will “start bombing the offices of these corrupt judges who are friends of terrorists even if they kneel before us and beg for their lives…”

A medical doctor by profession, Badoy-Partosa offered her own interpretation of past Supreme Court decisions, which supposedly contradict Judge Malagar’s decision. In effect, she reviewed the judge’s decision, offered what she represents as her superior reasoning, and she went on to pillory and denounce the judge for rendering a decision not to her liking.

In contrast, DOJ Secretary Jesus Crispin Remulla announced that the government will not contest Judge Malagar’s decision, but will file instead a new case, this time invoking a more recent law.

Badoy-Partosa was not content with terrorizing Judge Malagar, the entire judiciary, and the whole legal profession. She went on to Red-tag the judge’s husband and University of the Philippines Cebu chancellor, lawyer Leo B. Malagar, by insinuating that he’s a member of the CPP-NPA.

If now is a time when even a multiawarded jurist like Judge Malagar, and her equally respected husband, can be threatened with vicious violence, then the old regime is ominously coming back under the current Marcos Jr. administration. The current administration should disown the outrageous pronouncements of Badoy-Partosa, castigate her, and fire her, if it wants to avoid the mistakes of Marcos Sr.

By fomenting war between the entire judicial branch and the executive branch of government, by generating people’s disdain against the government, and by engendering sympathy for the communist movement, Badoy-Partosa proves herself, for all intents and purposes, as the real terrorist.