A question of survival | Inquirer Opinion

A question of survival 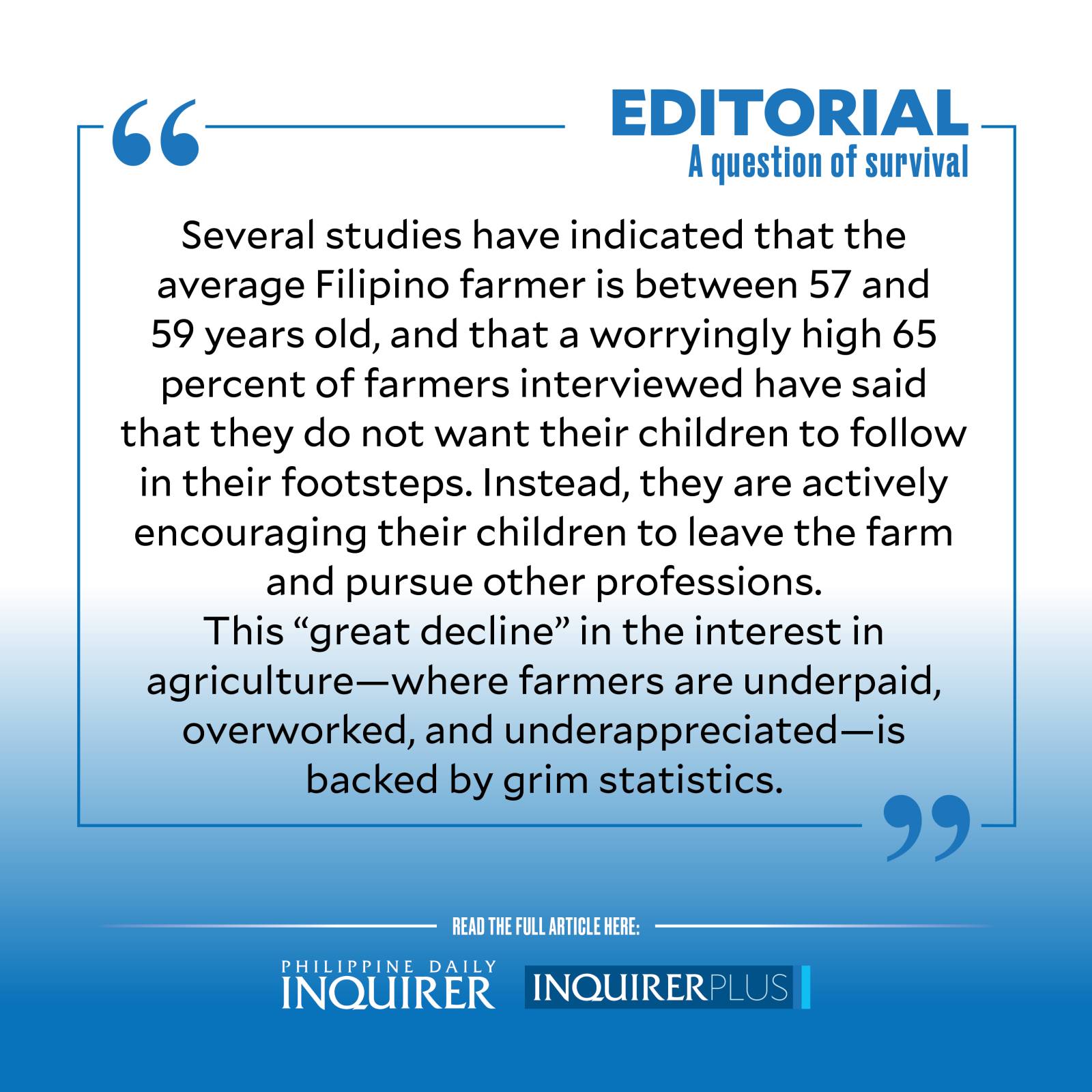 President Marcos Jr. was right to underscore in his speech last week at the 77th session of the United Nations General Assembly (UNGA) in New York the critical need to invest heavily in food security. Food, he said, was “not just a trade commodity nor just a livelihood.” Rather, it is “an existential imperative, and a moral one. It is the very basis of human security.”

Mr. Marcos, who still concurrently heads the Department of Agriculture, went on to talk in broad strokes about his administration’s efforts to shore up productivity by helping farmers adopt new technologies and connect to the global supply chain. But he was silent on one of the most basic problems plaguing the sector that, if unresolved, would have disastrous consequences down the road: the lack of interest among Filipino youth to take up farming.

Several studies have indicated that the average Filipino farmer is between 57 and 59 years old, and that a worryingly high 65 percent of farmers interviewed have said that they do not want their children to follow in their footsteps. Instead, they are actively encouraging their children to leave the farm and pursue other professions.

This “great decline” in the interest in agriculture—where farmers are underpaid, overworked, and underappreciated—is backed by grim statistics.

According to the Labor Force Survey cited in a March 2020 study by the Scalabrini Migration Center of Manila, the number of farm workers declined by 163,000 in 2012, and by a far worse 803,000 in 2017. Enrollment in higher education for agriculture studies also declined among young people, with those taking up agriculture-related courses accounting for a measly 3 percent of total higher education enrollment.

There are many reasons to explain why the youth are shunning agriculture, among them their belief that farming is “difficult and unglamorous,” no doubt reinforced by their family’s own experiences as farmers and fisherfolk who consistently rank among the country’s poorest.

Thus, it should come as no surprise that, based on the Scalabrini study, 41 of 68 young farmers interviewed expressed their wish to migrate and take up careers such as nursing, seafaring, engineering, and teaching.

Those who are considering agriculture as livelihood are meanwhile faced with lack of access to land, capital, technology, and markets. As if these challenges were not enough, they are also confronted with the growing risks to agriculture brought about by climate change, making it likely that they’d look for alternative means of making a living.

Former agriculture secretary William Dar, in a commentary, warned that, unless reversed, this disturbing trend of aging farmers and lack of young blood to take their place would result in the Philippines looking at a “critical shortage” of farmers in 12 years or less. Who then will feed the country’s population that is projected to hit 125 million by 2030?

Clearly, this ominous prospect should not be allowed to come to pass. Preventing it will require a concerted effort, given the magnitude and complexity of farming-related problems that have long beset the vital but largely ignored agriculture sector.

Mr. Marcos set a policy direction in his first State of the Nation Address in July when he touted agriculture as his administration’s “priority sector,” a message he reiterated last week at the UNGA.

He told the body that his administration would provide “innovative solutions and financial support to farmers and fisherfolk,” in the face of food security issues that became more urgent this year following Russia’s invasion of Ukraine, which disrupted global food supply chains that, in turn, led to food shortages and elevated commodity prices.

It is also encouraging that a number of government agencies are doing their part to encourage the youth to pursue agriculture.

The Technical Education and Skills Development Authority (Tesda), for one, has issued a call, encouraging the youth to avail themselves of its agriculture-related training courses, especially on modern rice farming to increase farm productivity and expected income.

Tesda deputy director general Aniceto D. Bertiz III said agriculture was one of the agency’s priority sectors as identified in the National Technical Education and Skills Development Plan 2018-2022. Tesda, he said, was committed to improve and expand its services in the agriculture sector to help the country achieve food self-sufficiency.

These are steps in the right direction, but other and more drastic measures have to be immediately taken by concerned individuals and agencies from the private sector, the government, the academe, and even consumers, to avoid a disastrous future where there are not enough farmers working the land to feed an ever-growing population. Indeed, the Filipinos’ very survival is at stake.