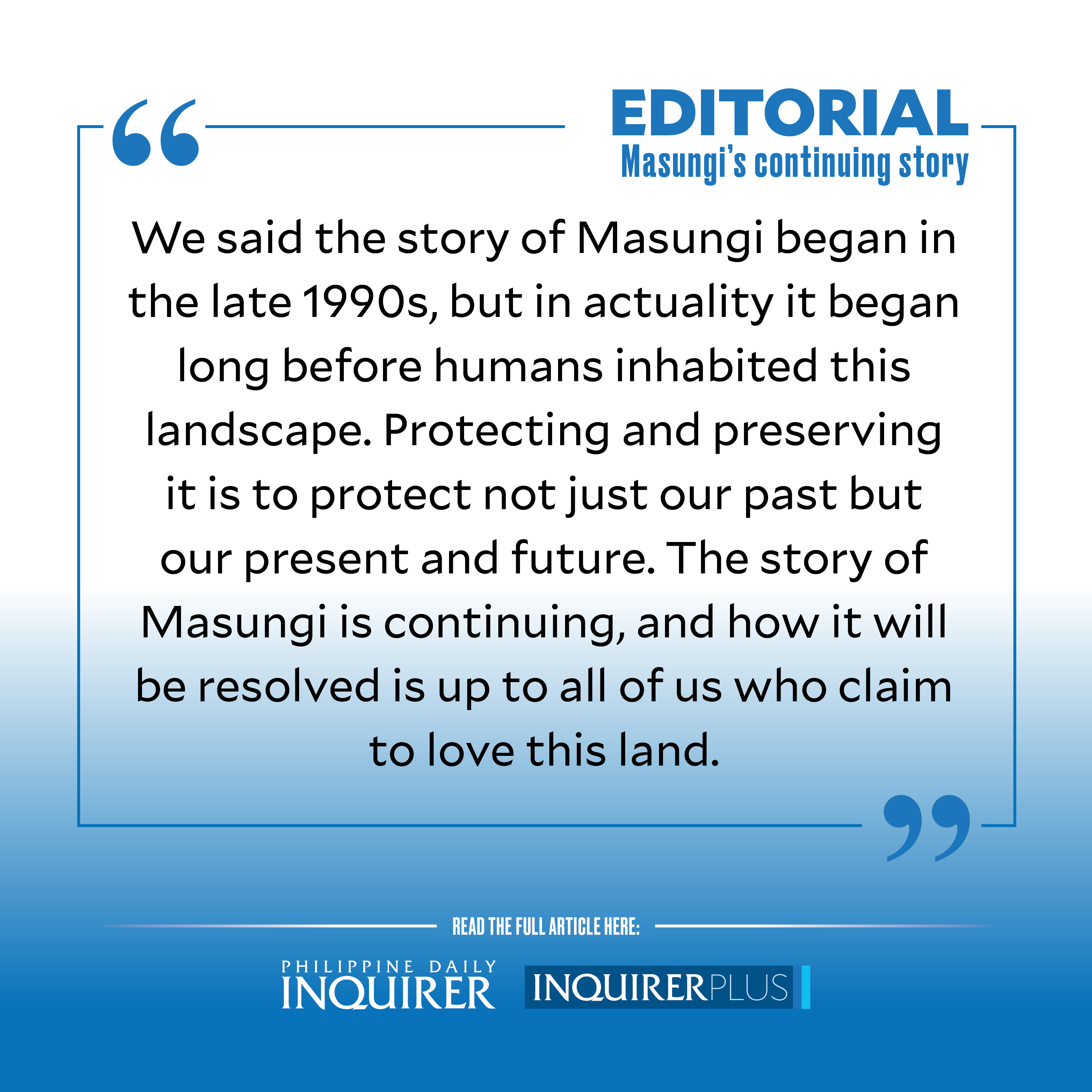 In this age of fake news, can fake rallies be far behind?

The Masungi Georeserve Foundation (MGFI) has denounced as a “bogus action” a protest staged the other day by a group of residents of Baras, Rizal, who accused the foundation of “land grabbing” within the ecotourism park.

Masungi, which sits inside the Upper Marikina River Basin Protected Landscape, is one of 94 protected areas under the Expanded National Integrated Protected Areas System law enacted to preserve areas under threat of illegal takeover and development. In 2017, the MGFI signed a memorandum of agreement with the environment department for conservation efforts within the area covering 2,700 hectares. It has become a prominent and popular destination ever since the foundation turned it into an ecotourism and environmental education site.

In a statement, the foundation said the “fake rally” was nothing new, describing it as “part of a systemic disinformation against genuine environment defenders.” It accused “those involved in corrupt activities, the illegal construction of big resorts and rest houses inside the watershed, and quarrying” as being behind the disinformation effort.

More alarmingly, Masungi is currently in the headlines after more than 30 armed men encamped on the roadside of the Marikina-Infanta Highway within the site’s boundaries. The MGFI described the group’s arrival as an “invasion,” and the men themselves as employees of Sinagtala Security Agency Services, supposedly owned by a retired police official.

Astonishingly, both law enforcers and Department of Environment and Natural Resources (DENR) officials have reacted to the news with studied neutrality and inaction, if not indifference.

True, Tanay police said they had “confiscated” firearms, including shotguns and revolvers from the encamped men. Despite the discovery of the firearms, a Tanay police official said these were merely “taken” and “not necessarily confiscated but put into custody for verification (of their) licenses.” No arrests were made, not even for trespassing, and the offenders were merely fined P1,000 each.

The foundation urges the DENR, the Department of the Interior and Local Government, as well as the Philippine National Police, “to take immediate action…and to stop this ongoing invasion, and remove the invaders.” The only action taken so far, aside from the confiscation of weapons, according to Billie Dumaliang, the foundation’s advocacy officer, has been the DENR’s assurance that a report has been forwarded to “appropriate offices for immediate action.” How “immediate” is difficult to discern, since the armed group arrived at Masungi more than a week ago.

Fears that the arrival of the armed men from a private security agency would lead to an escalation of conflict are not unfounded. Even before Masungi was declared a protected area in 2011, a report says, private settlements and establishments had already been constructed within its boundaries. Just last year, two stationed forest rangers were shot by unidentified assailants, just over a week after the DILG recommended the filing of criminal and administrative charges against a government official and private entities for violation of environmental laws. Before this, Masungi’s forest rangers had received threats for reporting illegal activities in the watershed.

Then last February, seven forest rangers were eating at a food stall when around 30 individuals ganged up on them, leading to the hospitalization of two rangers. The suspects, said the report, were believed to be working for owners of allegedly illegal resorts in the area.

The story of Masungi begins in the late 1990s, by which time the georeserve and its surrounding areas were deforested and “overridden by an epidemic of land-grabbing activities.” In a briefer, the foundation says “illegal logging was prevalent and threats of large-scale quarrying were present. Environmental offenders were many and took a heavy toll on the project, as we dreamt to restore its forests and transform it into a development where nature is a priority and man interacts with his surroundings mindfully.”

Noting how Masungi has become “a place we have grown to love,” the foundation has secured the distinctive rock formations, restoring and rehabilitating the area. “Trees are now growing taller, the wildlife is slowly but surely getting richer, and genuine concern for the environment is becoming an integral part of living for everyone involved.”

We said the story of Masungi began in the late 1990s, but in actuality, it began long before humans inhabited this landscape. Protecting and preserving it is to protect not just our past but our present and future. The story of Masungi is continuing, and how it will be resolved is up to all of us who claim to love this land.