The Marcosian past is present | Inquirer Opinion

The Marcosian past is present 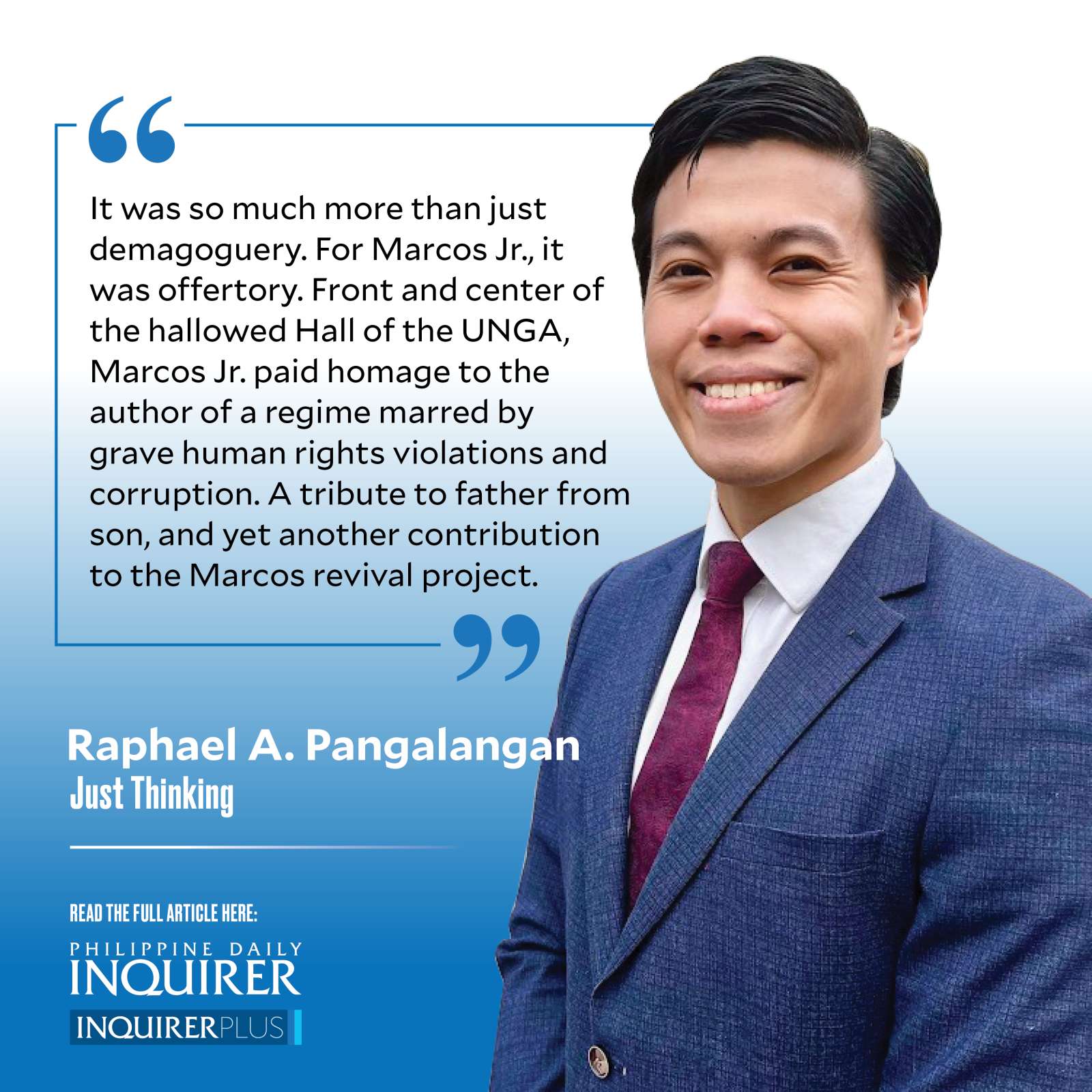 There was something eerily familiar about President Marcos Jr.’s speech at the 77th United Nations General Assembly (UNGA).

The last time a Marcos addressed the UNGA was exactly 30 years ago. On Sept. 22, 1982, then President Ferdinand E. Marcos Sr. took the stand at the 37th Session; declaring anew the country’s support to the UNGA, announcing the potential adoption of the Manila Declaration on the Peaceful Settlement of International Disputes of 1982, and highlighting the “disequilibrium” in the world economy. “In this state of affairs,” he said, “it is the developing countries which are suffering the most.”

Notably, the highlights of the father in 1982 were the talking points of the son 40 years thereafter. Marcos Jr. similarly invokes the Manila Declaration and the inequities of the world economy amidst COVID-19. In addition, he underscores the Philippines’ contributions to the United Nations Convention on the Law of the Sea of 1982 and implores the name of the highly esteemed Carlos P. Romulo—former president of UNGA and, afterward, the Philippine secretary of foreign affairs (SFA) from 1973 to 1984.

I must admit: The presidential speechwriters have done their homework.

These choice remarks were not random. On the contrary, they were deliberately cited as if to remind the international community of the advances made under Marcos Sr.’s dictatorship. Indeed, this was no simple case of diplomatic rhetoric or political tallying.

It was so much more than just demagoguery. For Marcos Jr., it was offertory. Front and center of the hallowed Hall of the UNGA, Marcos Jr. paid homage to the author of a regime marred by grave human rights violations and corruption. A tribute to father from son, and yet another contribution to the Marcos revival project.

But, of course, there is one other striking similarity shared by the 1982 and 2022 speeches, and that is their utter failure to address the elephant in the room.

Both Marcos Sr. and Marcos Jr. remained absolutely mum on the dismal human rights record of the dictatorship. In fact, from 1972-1985, any mention of “martial law” by the Philippine delegate to the UNGA would be few and far in between. And on the rare occasions martial law was indeed discussed, it would only be in a positive light. For example, on Oct. 9, 1972—barely three weeks from the infamous Proclamation No. 1081 imposing the entirety of the country under martial law—SFA Romulo reported to the 27th Session of the UNGA that Marcos Sr. “proclaim[ed] martial law […] to safeguard the Republic of the Philippines from violent overthrow by subversive groups” and “to eliminate the inequities in Philippine society by means of a thorough reform and restructuring of social, political and economic institutions[.]” It would be of little surprise to learn that this was followed by applause—as customary in these procedures. And to think that, at that point time, Philippine mass media was on lockdown, and opposition leaders, legislators, and journalists numbering in the thousands had already been arrested.

For 14 years under Marcos Sr.’s tyrannical rule, the nation faced one of its darkest chapters in history; both in numbers and in agony. Not only in scale, but in severity. 70,000 Filipinos were political detainees. A reported 34,000 were victims of torture, and about 3,240 were victims of salvaging.

Unfortunately, some would much prefer that we leave the sins of the Marcosian past behind us. Online posts commemorating the victims of martial law are either coldly ignored or dismissed as the tune of broken records. A comment reads: “Sawang-sawa na ako sa ‘Never Again to Martial Law!’” Well, if you’re sick of hearing it, we’re tired from screaming it. Though, to be honest, the optimist in me is somewhat relieved to know that our cries for justice are loud enough to annoy and have not simply fallen on deaf ears.

Alas, even government officials have gotten into the mix, with Senators Robin Padilla and Jinggoy Estrada urging Filipinos to simply “move on.” And, of course, could we forget the 2016 case of Ocampo v. Enriquez? The Philippine Supreme Court not only failed to enjoin Marcos Sr.’s burial in the Libingan ng mga Bayani, but—adding insult to injury—similarly concluded that the Filipino people should “move on” and “let this issue rest.”

But how could we, when justice for the Marcosian atrocities has not been rendered? And perhaps more importantly, I ask: Should we ever move on when so much injustice has already taken place?

I answer both questions in the negative. There is no moving on, for the Marcosian past is present. It continues to define us. Haunt us. May it continue to remind us of the thousands of lives lost, the sacrifices they made, and the empowering force of their dissent that eventually toppled a dictator. They cannot simply be forgotten. To forget is to forsake.

It is precisely when we are convinced that we can sever that painful history from the here and now that we know we are truly lost.

May that day never come.