[email protected]: No to willful forgetting 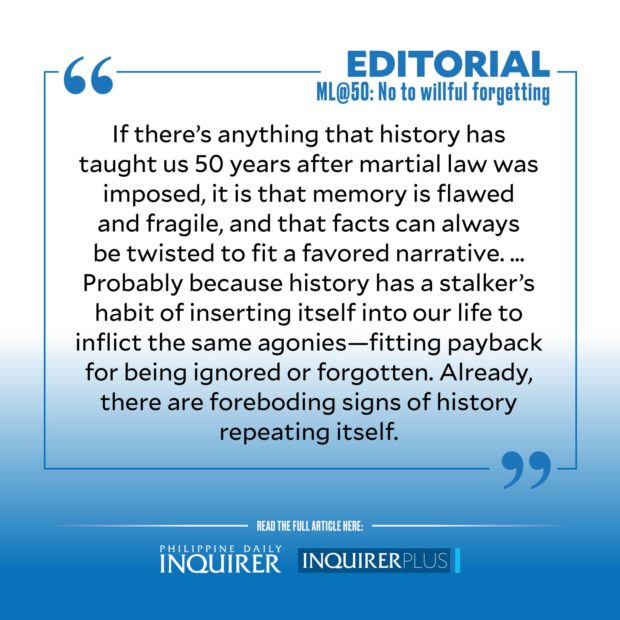 If there’s anything that history has taught us 50 years after martial law was imposed, it is that memory is flawed and fragile, and that facts can always be twisted to fit a favored narrative.

The rise of social media—where anonymous posts can say just about anything without citing sources—has given way to a flourishing climate of revisionism. Facts are assailed, dismissed, and held in contention, especially on the subject of martial law, which has alternately been hailed as a “golden age,” and defended as the only way “to protect our democracy” from “the danger of a violent overthrow, insurrection, rebellion, criminality, lawlessness, (and) anarchy,” as President Marcos Sr. himself cited in Proclamation No. 1081, which put the entire country under military rule.

His son, President Marcos Jr., repeated the same line when he recently acknowledged “the abuses that occurred” but said they happened “like in any war.”

Using the same war analogy, those perilous days at Edsa in 1986 showed that there are no atheists nor liars in the trenches. Quaking in fear when his coup plot was discovered, Marcos Sr.’s defense minister Juan Ponce Enrile sought to curry favor with opposition forces by readily confessing that the ambush on him was staged to justify the declaration of martial law.

After martial law was declared on Sept. 21, 1972, Congress was abolished, media outlets shut down, and thousands of critics, journalists, activists, and dissenters arrested and detained without charges. According to Amnesty International, over 100,000 fell victim to martial law atrocities from 1971 to 1981. Of these, 70,000 were arrested, 34,000 tortured, and 3,240 killed by the military and the police, while at least 878 went missing, according to the Families of Victims of Involuntary Disappearance.

The Sandiganbayan’s conviction of Imelda Marcos on seven counts of plunder also showed that the “golden era” description of martial law applies only to the Marcos family and cronies who took over the country’s most lucrative businesses and pocketed kickbacks, commissions, and huge foreign loans meant to resuscitate the flagging economy. From $360 million in 1961, the country’s foreign debt ballooned to $28.26 billion by the end of Marcos Sr.’s term.

But why dwell on the past when you can move on and look to the future? Marcos supporters and proadministration social media sites have asked.

Probably because history has a stalker’s habit of inserting itself into our life to inflict the same agonies—fitting payback for being ignored or forgotten. Already, there are foreboding signs of history repeating itself.

The strong push for the revival of the Reserved Officers’ Training Corps, made optional in 2001 because of its culture of corruption and violence, as well as the P150-million confidential fund that the Department of Education said would go to gather intelligence affecting students’ security inside campuses, point to the militarization of schools and the possible cultivation of blind obedience to quash critical thinking and dissent.

Then, there’s the anti-terrorism law that, since the Duterte administration, has been used to Red-tag progressive groups and individuals critical of the government, and to block the news sites of alternative media outlets. Bookstores stocking liberal titles have been vandalized, while children’s books that explain martial law to young readers have been described as “propaganda.” In some state colleges, books that so much as mention any leftist ideology are pulled out of the library.

The power of the purse has constrained agencies like the Commission on Human Rights from pursuing its mandate to safeguard civilians from state abuses. Lack of funds also put in doubt the construction of the martial law museum meant to remind the public of the dangers of absolute power and military control over civilian rule. The budget department has insisted that funding for it has always been a mere congressional insertion.

Fortunately, such insidious moves to bury memories of martial law have been defied by those who have turned “#neverforget” into more than a hashtag. When news broke about the banning of progressive publications, books on martial law started flying off the shelves, with netizens posting on social media the sites where people can also watch martial law movies for free.

Then, there are the countless activities here and abroad, organized by academics and activists, to push back against the “blatant lies” on those dark days, with events and schedules posted on social media.

With the unfinished business of finding the desaparecidos and collecting more ill-gotten wealth, willful forgetting is never an option where martial law is concerned. Fifty years on, this ignominious scenario still lurks in every authoritarian law, policy, or pronouncement, just waiting to pounce back. Let’s not let our guard down.