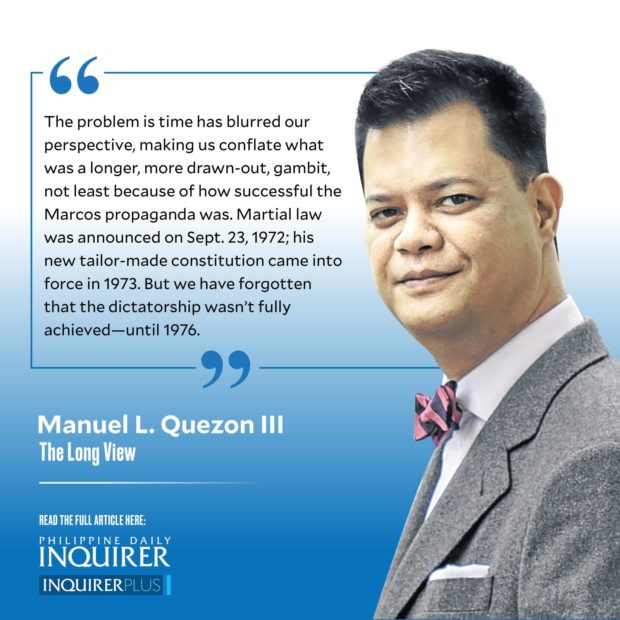 If we assume the Philippines was an outlier not only in its part of the world—both Singapore and Malaysia were essentially parliamentary one-party states, armed with draconian British colonial-era laws; Indonesia, Thailand, Burma, and South Vietnam were military dictatorships; and South Korea was transitioning from a junta to a one-man dictatorship—but in the wider developing world, and if we consider, furthermore, it was even more of an outlier in the formerly colonial world in single-party rule having fractured at independence, resulting in an accidental, and all the more artificial, because of it, two-party system, then the picture that emerges of Philippine politics as President Marcos Sr. embarked on being only the second president elected to a second term is of a system desperate to dismantle itself. The only question was who would get to do the honors and get bragging rights.

The colonial era had given the Philippines two things, broadly speaking: a one-party government (not unique; it was the trend among independence movements who had to consolidate to resist the colonial strategy of divide-and-conquer) and one that thrived on public opinion relatively freely expressed (unlike the British and the French in their colonies, Americans were more tolerant, even assiduous, toward relatively free speech). While Right and Left knew the power was incompatible with free speech, they shared, with the Middle (slender as it actually was), an acceptance of the necessity of harnessing it. The Left at home could, like the Left elsewhere, count on the young alienated by the smug conservatism of the wartime generation; Marcos, like others, could count on the fear and loathing of the wartime generation who were now parents, of their hippie offspring,

Dwight Eisenhower once said “plans are worthless, but planning is everything.” He also said “… the very definition of ‘emergency’ is that it is unexpected, therefore it is not going to happen the way you are planning.” Even if one argues that Marcos and his foes had more in common in terms of shared contempt and hostility, for the existing system, where he significantly differed from his foes and rivals in the Left and Right was that he proved less doctrinaire than them. For his peers in the political class, they ultimately failed in being fixated on a short-term goal, which was simply that of preventing Marcos or a proxy like his wife, from being any kind of candidate in 1973. The Left, for its part, was fixated on creating the conditions for a Maoist takeover of power.

What would happen was the creation of various opportunities: for the Middle-Right, a “Ban Marcos Resolution” in the constitutional convention, to prevent a Marcos prime ministership or an Imelda in 1973 presidential run; for the Left, a terrorist attack at Plaza Miranda to escalate the confrontation among political factions. Marcos, in the end, proved more adept at turning an ever-changing set of circumstances (here, Plaza Miranda being a communist attack and not a Marcos scheme becomes crucial) into a consistent means of cementing the support he’d identified as crucial for his own objectives: unrest in the streets drove anxious parents, businessmen, prelates, and others, to wanting order to be imposed.

This meant that although for decades, Marcos lost the battle for public opinion over Plaza Miranda (only fairly recently was the possibility even considered that it wasn’t instigated by Marcos), he won the battle for the support of enough of the middle, upper, and professional classes, for him to embark on the first part of what would turn out to be a much more protracted campaign to establish not just one-man but a one-family rule. For Plaza Miranda, and Marcos’ response to it (suspending the writ of habeas corpus) presented him with a kind of poisoned victory: the Supreme Court in 1971 upheld his proclamation, but also reversed previous rulings from 1905 and 1949 that had stated the courts could not review the acts of the executive; now, the Court dangerously (for Marcos) declared it had the right to inquire into the factual basis, and thus rule on the validity, of the suspension of the writ: a ruling that could justify a review of martial law in the future.

We know Marcos learned from this and turned a potential stumbling block into a more focused effort to divide the institutions arrayed against him. For the political class, his martial law coup came with a sweetener aimed at both the constitutional convention and Congress: if delegates approved his tailor-fit constitution draft, those delegates would become assemblymen; as for senators and congressmen, if they permitted the 1935 Constitution to be replaced, they would become automatic assemblymen, too, with the added perk of being freed of national elections and, indeed, a powerful presidency, after that.

This meant he could conserve his gunpowder for three, more intractable, targets: the media, who would really have to be muzzled by force (knowing a substantial subset were genuinely in his corner: people like Teodoro Valencia belonged to the wartime generation outraged by hippiedom), actual radicals who could be enticed to join or hunted down if they refused, and the judiciary, who in the end could be convinced to legitimize the coup because they themselves belonged to the fearful wartime generation or could be made to see the light by being threatened with the abolition of the court itself.

The problem is time has blurred our perspective, making us conflate what was a longer, more drawn-out, gambit, not least because of how successful the Marcos propaganda was. Martial law was announced on Sept. 23, 1972; his new tailor-made constitution came into force in 1973. But we have forgotten that the dictatorship wasn’t fully achieved—until 1976.