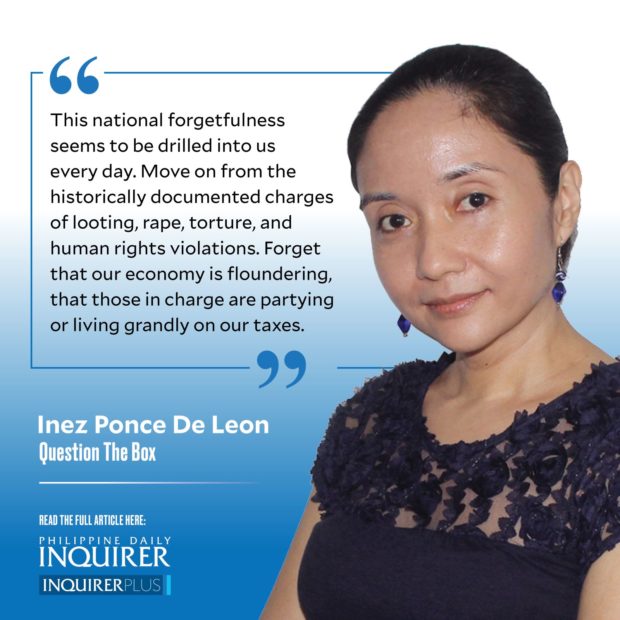 A few months ago, before the elections, my doctor and I were discussing my column. He wondered where the vividness of my descriptions of martial law came from; I was too young then, he said.

I was young, I told him, but I never forgot.

I remember being a child sobbing at photos of Ninoy Aquino in his coffin, his face misshapen after he was shot in the head. What accompanied my tears was dread, that something horrible had happened to someone good, that larger forces at work were shouting, “See what we can do to those who defy us.”

I remember being a kindergartener debating with my cousin across the garden that divided our houses. His family was proadministration; mine was not. He said our country was fine, that we were living well because only the bad people were being punished. I spoke (with much coaching from my mother) about the person who sat in Malacañang, who stole our country’s money so that his family could live happily while the rest of us starved.

I remember being in our local voter’s precinct, watching people cast their ballots for the snap elections. My aunt was there, in the rough vest of Namfrel volunteers. Later, she would tell us how the military came to try to take the boxes away from them, how people wrestled and protested because they were brave now. They knew better now.

I remember the Comelec walkout by election inspectors, when the votes were coming in, and the tallies were being played with.

I remember standing amongst hundreds of students as Cory Aquino came to St. Scholastica’s College. We were prepared for that rally: Our teachers taught us about martial law, elections, fairness, and justice. I might have been a child, but I knew even then that no amount of adult baby talk meant to placate children would ever make stealing right.

I also remember the fear, living alongside the dream of wanting great things for our country and ourselves. I also remember wanting to go to Edsa, to speak up, because I knew—even if I could not articulate it—that there was a great evil that had long plagued the country, and it was up to all of us to push it out.

Years of education and lectures and readings later, I learned that the revolution did not start at Edsa. It had been happening for over a decade. It had never been bloodless. It was a revolution built on the backs of students who were unafraid to make their voices heard even when they knew that the military could take them away, torture them, kill them, and dump their maimed bodies in places only dirt and decrepitude would go. It was a revolution fueled by starving sugar farmers, massacred communities, workers on whose still-living bodies a film center had collapsed.

I wasn’t there when martial law was declared, but I was there to feel its impact. And where my memory fails me, my common sense fills in the details.

This national forgetfulness seems to be drilled into us every day. Move on from the historically documented charges of looting, rape, torture, and human rights violations. Forget that our economy is floundering, that those in charge are partying or living grandly on our taxes. Forget the atrocities of ROTC because, really, it’s not militaristic despite the acronym standing for “reserve officers” and the developers all coming from the Department of National Defense.

We don’t look at evidence. We look at potential, and then blame the rest of the world when expectations fall short. When, indeed, can we as a people fall in love with obvious service instead of imagined order?

This week, our students came to school in black shirts, to commemorate the 50 years since martial law. They protested events that they had never witnessed, but which they knew comprised a dark period in our history that should never be repeated.

They were no mere children being forced or brainwashed. Then again: No one is ever a mere child when the country’s future is in the balance. No one is a mere spectator. No one should ever forget.