Fake news as old as history 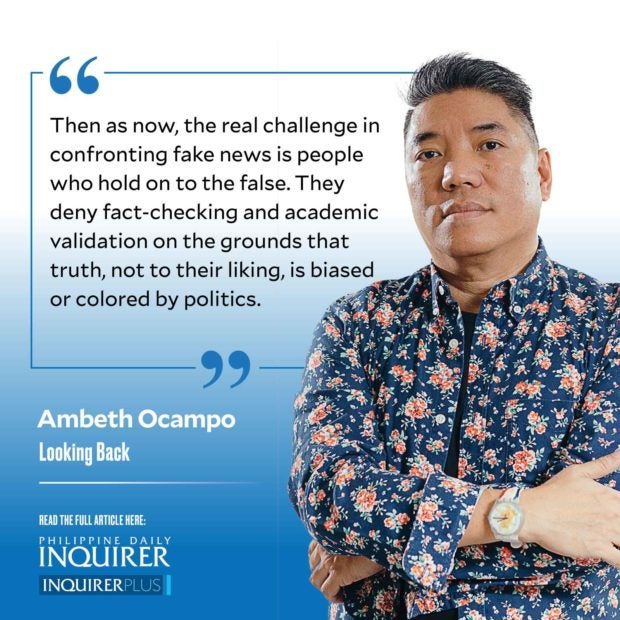 Contrary to popular belief, fake news is not new. Fake news can travel online faster than you can type out T-R-U-T-H, but it has always been around, long before the internet was invented. It is as old as history. Fake news is best described as history’s shadow. The timeliness of these reflections moved the Philippine Historical Association to organize its annual conference on the theme “Dalita at Pag-asa, 1872: Historical Controversies, National Oblations, and Enduring Filipinism.”

While preparing my presentation on Jose E. Marco, the most successful forger in Philippine history, I came across a letter that historian Carlos Quirino wrote to anthropologist E. Arsenio Manuel dated Aug. 6, 1972, six weeks before martial law descended on the Philippines like the spell of the evil witch in “Sleeping Beauty.” Quirino had written up his archival research on Fathers Gomes, Burgos, Zamora, and Pelaez for Philippine Studies. “You’ll have to agree,” Quirino told Manuel, “that the ‘La Loba Negra’ and other so-called writings of Burgos are spurious, authored by that famous fabricator Jose Marco.” Quirino concluded with a quip, quite timely this month, the 50th anniversary of the declaration of martial law, “Add an ‘s’ to his name [Marco] and we have the greatest political magician in our history.”

One would think that after Marco had been exposed by historians William Henry Scott in 1968 and John Schumacher, S.J., in 1970, his handiwork would be removed from our history, our memory, and, most importantly, our textbooks and classrooms. When the National Historical Institute issued Resolution No. 12, s. 2004, “Declaring that the Code of Kalantiao has no valid historical basis,” one would think it would be acted on accordingly. On June 9, 2005, the municipality of Batan, Aklan, where the national shrine to the fictitious Kalantiao stands, wrote the president of the Philippines, attaching a resolution of the Sangguniang Panlalawigan, “vehemently opposing and urgently requesting” the president to deny the proposal of the Historical Institute to delist the Kalantiao Shrine. Their counterargument was the obscure pamphlet “Paging Datu Kalantiaw in the New Province of Aklan” (1956) by Digno Alba, former member of the Department of Education Board on Textbooks and a 1903 government “pensionado” or scholar to the US. Kalantiao’s historicity rested on the reflected glory of “six distinguished and highly placed personages [known for their] erudition and integrity as historians” whose names were listed in the acknowledgments. Jose Marco’s Kalantiao hoax lives on.

Then as now, the real challenge in confronting fake news is people who hold on to the false. They deny fact-checking and academic validation on the grounds that truth, not to their liking, is biased or colored by politics. I have seen two websites, with a combined number of subscribers of over 500,000, with posts that Jose Rizal did not die by musketry in Bagumbayan on Dec. 30, 1896. In their alternative history, Rizal lived to be 113 years old! Rizal went around Europe and became a physician and friend to emperors, kings, and popes. He amassed a fortune in gold and, before his death, entrusted it to Ferdinand Marcos Sr.

Historians and courts work on evidence to seek truth, but getting people who have made up their minds to believe them is like leading the proverbial horse to the stream, leaving it to decide whether to drink or not. Last year, on the 500th anniversary of the Magellan expedition, I made the six-hour roundtrip by pump boat to Homonhon to see the Magellan landing site. I prepared by rereading Antonio Pigafetta’s eyewitness account of the event, and was surprised when someone referenced the August 1934 Philippine Magazine article “A Hitherto Unpublished Document on the Landing of Magellan at Homonhon.” This document, according to a note, was copied by a certain Gil Piamontes de Alazerna in 1857 before the originals in the Archives in Intramuros burned. Part of this fake document was reprinted by a former Inquirer columnist who missed an important note stating the source of this Homonhon document as none other than the forger Jose Marco, whose contributions to Philippine history seem limitless.