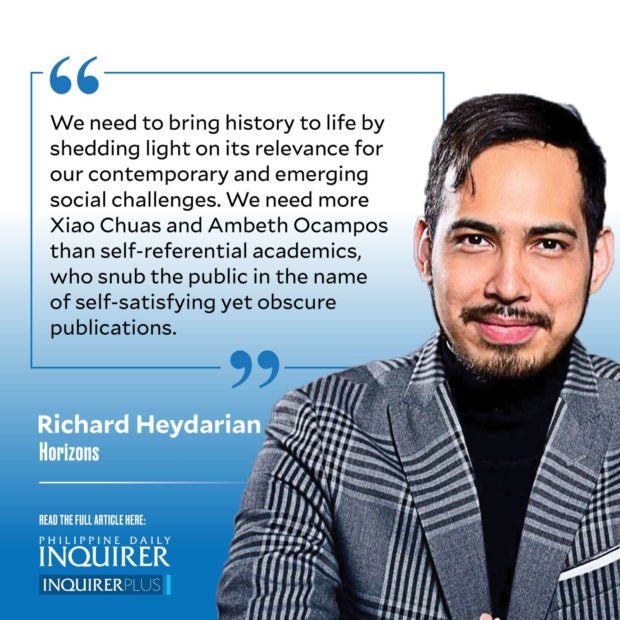 To be ignorant of what occurred before you were born is to remain always a child,” remarked the great Roman statesman Cicero in Orator (46 BC).

In the Old World, stretching from Europe and Russia to the Near East and all the way to China, the fundamental challenge nowadays is the deliberate distortion of collective memory by entrepreneurial demagogues. The heirs of former empires are channeling public resentments over lost imperial glory to distract from contemporary misgovernance and, in extreme cases, fuel geopolitical adventurism.

In the United Kingdom, the upshot of puerile, nostalgist politics was Brexit. In Russia and China, particularly disconcerting forms of historical revisionism have turbocharged neo-imperial ambitions under the guise of resisting American hegemony.

All of a sudden, smaller nations such as Ukraine or Taiwan are portrayed as “threatening” for simply seeking freedom and autonomy; while vast swaths of lands and waters across the Eurasian landmass and rimlands are treated as “historical” extensions of authoritarian superpowers.

In the Middle East, historical feuds, both real and reimagined, have unleashed atavistic conflicts, which threaten to tear the fabric of the world’s most ancient societies apart. In the Philippines, a byproduct of Spanish imperial imagination and thus an extension of the New World across the Pacific, our relationship with history is radically different.

In many ways, our challenge is ignorance without bliss. Ours is a dangerous innocence, which has made our folks vulnerable to the worst kinds of historical denialism and distortions. Among our educated classes, there is often more awareness of the nuances of the American or French revolutions than our own against both imperial Spain and the United States.

Meanwhile, public awareness of precolonial Philippines, which was composed of a myriad of thriving kingdoms at the interstices of great Asian civilizations, is virtually nonexistent.

What both the “new” and “old” worlds share in common, however, is the desperate and widespread yearning for certainty in a supposedly “golden past” amid an increasingly turbulent 21st century. Lacking a deep sense of our ancestors’ past, our most passionate historical debates often stretch only as far back as the long reign of Ferdinand Marcos Sr., who came closest to establishing a self-styled national royalty.

The decisive and colorful tenure of our Commonwealth President Manuel Quezon has hardly pierced into public consciousness. We often know more about our mid-19th century “ilustrado” heroes than our own mid-20th century presidents.

The Aquino-bashing cottage industry—conveniently overlooking the half-century combined legacies of the Marcos, Arroyo, Estrada, and Duterte administrations—is indicative of our crisis of historical consciousness.

So, dear reader, what is to be done? Let me briefly discuss three interrelated elements. First and foremost, let’s not forget that the struggle for historical consciousness is not only a matter of preaching facts, but also nurturing metanarratives based on historical evidence.

As prominent Filipino historians such as Teodoro Agoncillo have noted, history is more than archeological discovery and logical collation of random facts: it’s also an art, driven by passion for truth and social emancipation.

And this brings us to the role of historians, who have the duty to make our past, both ancient and contemporary, relatable to the demos. As the penultimate philosopher of history Georg Lukács once argued, “no one can escape responsibility with the excuse that he is only an individual, on whom the fate of the world does not depend.”

We need to bring history to life by shedding light on its relevance for our contemporary and emerging social challenges. We need more Xiao Chuas and Ambeth Ocampos than self-referential academics, who snub the public in the name of self-satisfying yet obscure publications.

Ultimately, however, we need an institutionalized response, which cuts through state institutions, namely the Department of Education, as well as the civil society, namely nonprofit and organizational efforts at raising historical consciousness among our people.

The current (re)occupant of Malacañang may have all the reasons to dislike history, both as a discipline and public exercise. But without a sense of history, we are hapless vessels adrift in an ocean of aimlessness. And our nation will struggle to win the future if it is bereft of an anchor to its past. As Cicero put it: “For what is the worth of human life unless it is woven into the life of our ancestors by the records of history?”