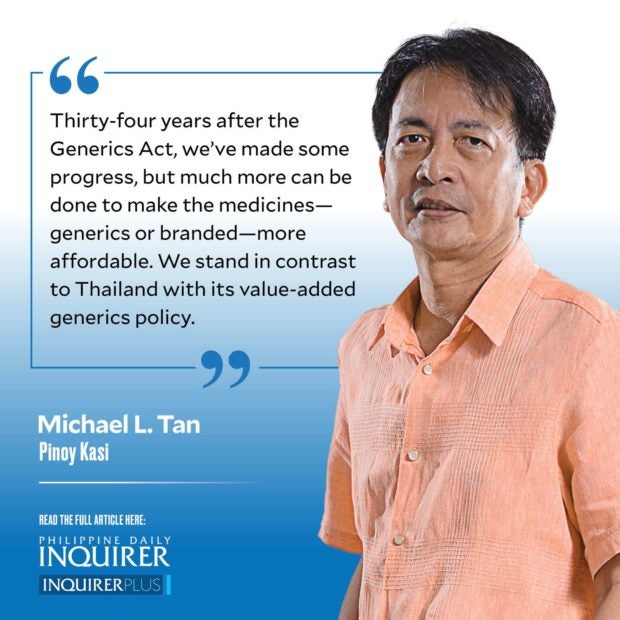 I was in Bangkok the other week for a meeting and one morning, while I was in a pharmacy to get one of my medicines, I remembered a Filipino participant who told me she had run out of the antihistamine cetirizine. She was worried because of her food allergies.

I asked the pharmacy clerk how much their cetirizine was for a strip of 10 tablets and what I heard was 70 baht or about P116. Not bad, I thought.

When the cashier told me what my total was, including my own medicines, I was surprised and told her maybe she had forgotten to include the cetirizine because the total was so low.

She then told me what each medicine cost, and it turned out the cetirizine was 17 baht, not 70 baht. That’s P28.00 for 10 tablets; less than the cost of one tablet back home.

I suddenly remembered how, years ago, there were Filipino viajeros and viajeras or travelers who would buy Thai medicines to sell back home, much like Bangkok clothing.

I didn’t become a viajero, but I did buy my medicines in bulk. A paracetamol tablet cost as little as 5 centavos each. My maintenance medicine for high blood pressure, one of the beta blockers, was P1.50 each, a sixth of the price in the Philippines.

I never had problems with the Thai drugs’ efficacy, quality assurance was there because the government itself produces low-cost medicines, usually as generics.

We passed a Generics Act on Sept. 13, 1988, one of the most comprehensive pieces of legislation of its type with very specific descriptions on how the labels should read, generic name larger than brand name. Physicians were required to prescribe by generic names, with an option to indicate a preferred brand name, but the final decision was to be made by the consumer.

The proposed law was opposed every step of the way by drug companies, who warned about substandard drugs and threatened to withdraw from the Philippines. The Philippine Medical Association at that time allied itself with the drug companies.

But the health minister (secretary) at that time, Dr. Alfredo Bengzon, held on, with the strong support (and pressure) of nongovernment organizations, both local and international. Several years after the law was passed, Bengzon received an international consumer award for the innovative law and for tackling the storms that followed the law’s passage.

Years of dependence on drug company marketing had distorted physicians’ prescribing habits. The use of generic names actually helped physicians to be more conscious about what they were prescribing, and to avoid irrational combinations of medicines.

Lay consumers learned to recognize their medications through generic names. I had a housekeeper at that time who developed an allergic reaction to one of her medicines, and she was surprised because she said she never had any reactions before. I explained to her that the medicine had been reformulated, but the drug company continued to use the old brand name. I taught her to read the generic names, which made her conscious that she had an allergy to nonsteroidal anti-inflammatory analgesics like ibuprofen, mefenamic acid.

The drugstores still tend to push brand names. If they offer generics, they go “generics lang?” the “lang” (only suggesting an inferior option). But some of the big companies began to go into branded generics as well—RiteMed was an example. Following that were drugstores offering branded generics.

I am forever indebted to one drug company that, appropriately, called itself Patriot Pharmaceuticals for their production of a branded generic: memantine, for patients with Alzheimer’s, costing less than half of the original brand name producer. My mother was on memantine for about six years and the savings were tremendous.

Our generics policy was not without problems. Unfortunately, some small backyard companies went into generics as well, importing cheap and not always good quality medicines. Consumers and physicians complained about these medicines, eroding public trust.

The Thai government has been more successful with stricter quality control and, even more importantly, taking up production of the medicines. We still remain almost totally dependent on imports.

Thirty-four years after the Generics Act, we’ve made some progress, but much more can be done to make the medicines—generics or branded—more affordable. We stand in contrast to Thailand with its value-added generics policy.