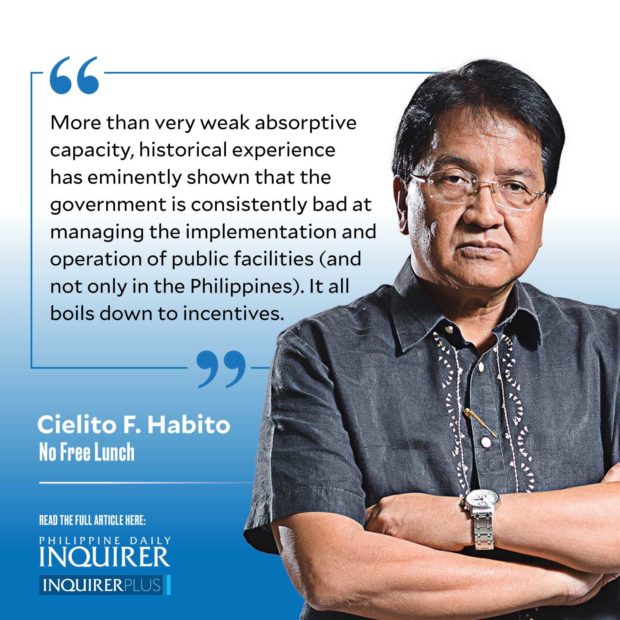 Our homeowners’ association owns a 750-square-meter lot donated by the original landowner. Through a generous benefactor, we were able to install on it facilities made from container vans, a multipurpose community center that will house programs for young children, youth, parents, and senior citizens. Our mayor kindly offers to further supplement the facility with another structure dedicated to senior citizens and the elderly, which would have been very welcome if not for one strict condition: that the land be donated to the municipality. We could not agree, of course.

But I understand the issue. Government regulations don’t allow spending public funds on nongovernment property. But I believe many good potential public-private partnerships (PPP) have been nipped in the bud by stringent rules designed to curb deviant behavior that is more the exception than the rule. So we end up “throwing out the baby with the bathwater,” and forego synergistic initiatives that could well be superior to what the government or private sector acting alone could achieve.

At a time when public finances are much tighter than prior to the pandemic, but our infrastructure and other facilities and services continue to lag behind our needs and those of our Asean neighbors, we cannot but look to PPPs for help. These saved us from eight-hour power outages in the early 1990s. These allowed us to extend and upgrade our expressways to ease traffic congestion in and out of our metropolises. These made water finally flow 24 hours a day from faucets in connected households in Metro Manila, far sooner than would have happened (if at all) had water services remained with the government. And these have given us superior air, land, and sea transport terminals; bridges; hospitals; public markets; slaughterhouses; government IT systems; and more. We would be in far worse shape now if the government had not welcomed partnerships with the private sector in filling the country’s infrastructure and service gaps.

The previous government appeared to have had an attitude toward the private sector that was suspicious at best, and hostile at worst, including in the provision of public services. They started out with the bold assertion that the government could do things by itself (or even do it best), and that it had the money to do so. But it quickly became all too clear that our primary infrastructure agencies were not up to the task, as the Commission on Audit’s (COA) annual audit reports showed them disbursing a mere quarter to little more than a third of their annual budgets, year after year. COA cited hundreds of budgeted projects that were either delayed, stalled, or never started.

But more than very weak absorptive capacity, historical experience has eminently shown that the government is consistently bad at managing the implementation and operation of public facilities (and not only in the Philippines). It all boils down to incentives. Public managers who are less than altruistic—which seems more common than otherwise—tend to care more about their compensation and the perquisites of their jobs, than the efficiency of the firms they run. Contrast that with a private sector manager, who would normally have a direct stake in the efficiency (hence profitability and success) of the company s/he manages, because her/his compensation also depends on it.

So here we are, faced with so many challenges ranging from severe malnutrition in young children, an education crisis worsened by the pandemic, inefficient and cumbersome government services, to inadequate and costly infrastructure—all in which the private sector can often do things more efficiently and effectively. All of us, and the government in particular, ought to be welcoming PPPs, and it goes far beyond infrastructure. It could mean well-motivated groups working hand-in-hand with the government, especially at the local levels, in initiatives to improve lives in their local communities.

But we must change mindsets, and adjust rules that preclude such partnerships at the very outset. We need rules and procedures that enable, rather than obstruct, creative well-meaning partnership initiatives for the common good.