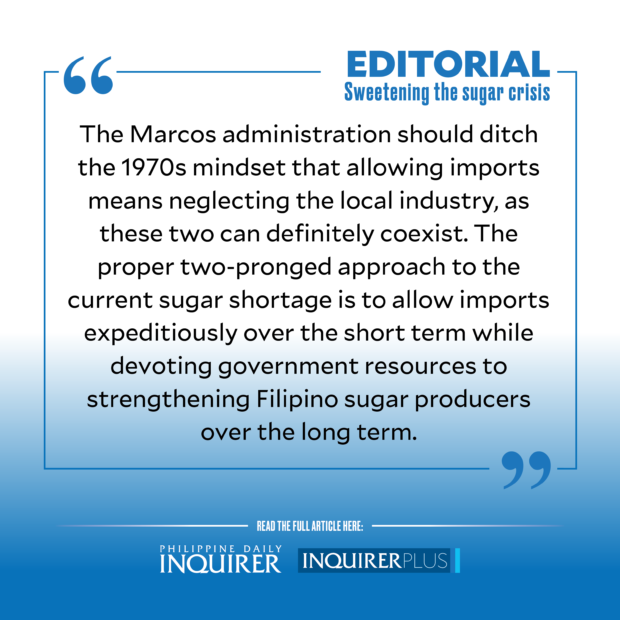 Let’s be frank about it: The Marcos administration’s handling of its first real test—the sugar crisis currently afflicting the country—leaves much to be desired.

First, a well-prepared team would have kept abreast of major developments in key aspects of the country’s affairs, especially in a sector where then Candidate Marcos had focused on and spoken many promises on his road to Malacañang.

The early warning signs were there, and a competent team of advisers would have, and should have, informed the Chief Executive the moment he won that a sugar shortage was looming—one that could hurt a broad swathe of the President’s constituents, whether they be poor sugar farmers, his wealthy sugar miller supporters, or the millions of consumers who voted for him.

It’s also looking more and more that the President’s decision to handle the agriculture portfolio himself had been ill-advised. Though initially delivering the message that the top official of the land would prioritize a sector that holds so much promise but has been neglected for so long, the reality is that running a sprawling department while also running the country is no mean feat even for the most experienced politicians. Something important is bound to be overlooked. And as recent events have shown, this happened sooner rather than later.

Once the sugar shortage became a full-blown crisis, the President’s men revealed their lack of administrative skills in the way they handled it. Executive Secretary Vic Rodriguez, who initially absented himself from Senate hearings on the issue, later admitted repeatedly ignoring text messages from former agriculture undersecretary Leocadio Sebastian on the prospect of importing sugar despite the urgency of the matter.

Rather than acknowledging culpability, he threw Sebastian under the bus for signing on behalf of the President the sugar importation order that was revoked and later reinstated. This disregard for a fellow official left on his own to make a tough decision would scare away highly qualified candidates for the job, seeing how their predecessor had been left twisting in the wind (and could even be charged) for a mess not entirely of his making. It takes experience and administrative skills to run a large organization, especially at a time of crisis, and sadly, the President’s men are sorely lacking both.

Ultimately, the price for these amateurish errors is being paid by the nation’s citizens, who now have to shell out more money for this basic commodity at a time when inflation is rampaging, and the country is just beginning to emerge from its worst economic crisis since the end of World War II.

The good news is that it’s still early days and President Marcos Jr. has time, if he acts fast enough, to implement both short- and long-term solutions to satisfy the needs of Filipino consumers for affordable sugar, and the aspiration of wealthy sugar millers for the industry to develop further.

For short-term measures, the President must allow the importation of a sufficient amount of sugar to cover local production shortfalls due to human factors as well as force majeure.

The importation process should be streamlined and accelerated to prevent corruption and to allow both retail consumers and large industrial users to get the sweetener at reasonable prices when they need it.

The decision on every importation order should be devolved to key people who are closer to the market and can respond rapidly to any perceived shift in the supply and demand situation.

The long-term solutions should include the restoration of the funding for the sugar industry development fund, which had been slashed in recent years supposedly due to underutilization. The fund should be replenished and put under the care of able administrators who should see to it that the resources are properly utilized to make the Philippine sugar industry more competitive against its foreign counterparts.

The Marcos administration should ditch the 1970s mindset that allowing imports means neglecting the local industry, as these two can definitely coexist. The proper two-pronged approach to the current sugar shortage is to allow imports expeditiously over the short term while devoting government resources to strengthening Filipino sugar producers over the long term.

Adopting this framework to other aspects of the economy where similar debates between importation and local production exist will yield positive solutions for which Mr. Marcos would be remembered long after his term ends.

Enough of scapegoating and pinning the blame on hapless subordinates. The blame game is for kids. Professionals find solutions.

If the President’s men find it in themselves to humbly learn from this painful experience, they may yet become the expert administrators of government that Filipinos need at this crucial juncture of our history.