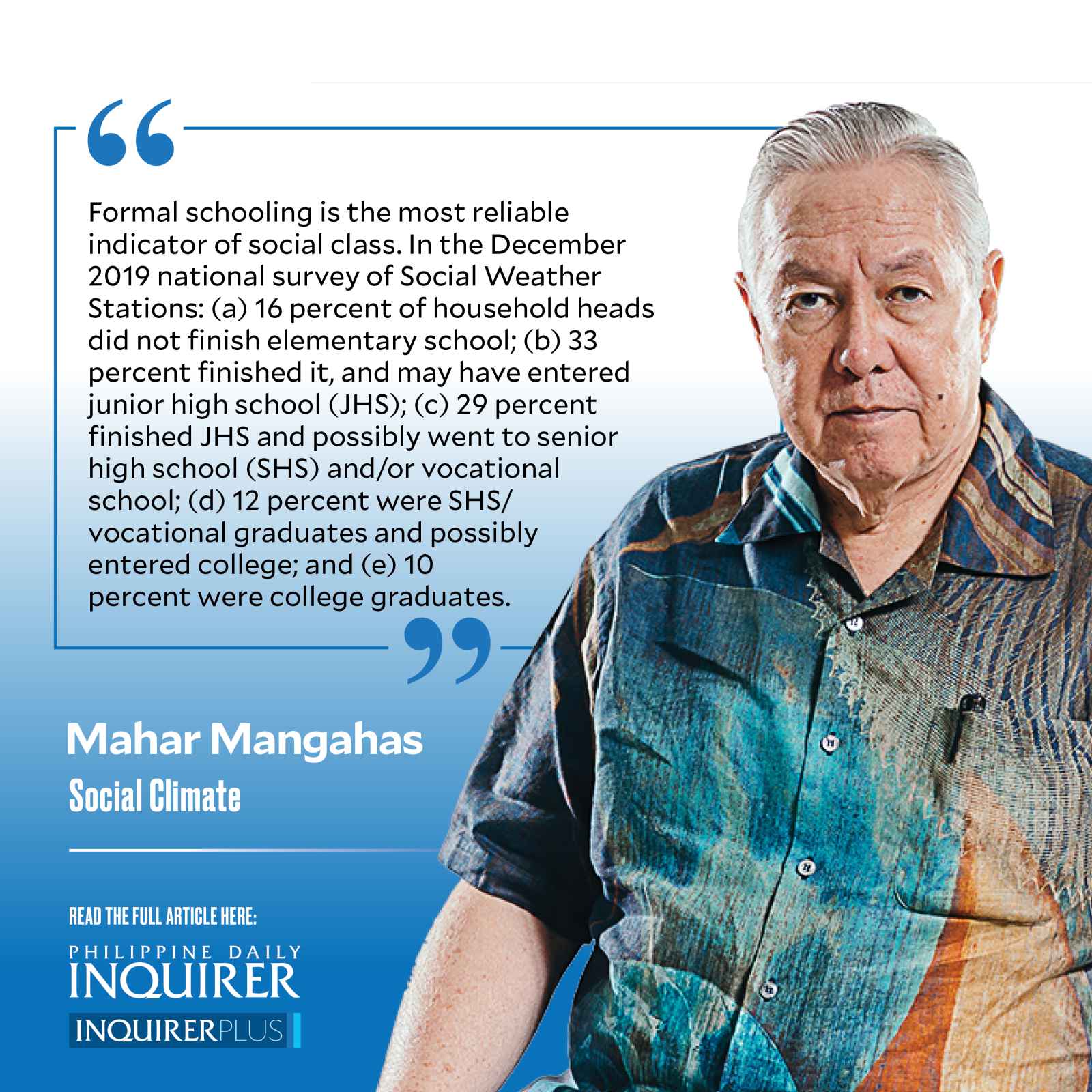 This piece concerns the sizes of classes in society that differ vertically, like the “lower class,” “middle class,” and “upper class.” (It’s not about horizontal groups, like leftists, centrists, and rightists.) How does one estimate the proportion of Filipino households in each class?

Formal schooling is the most reliable indicator of social class. In the December 2019 national survey of Social Weather Stations: (a) 16 percent of household heads did not finish elementary school; (b) 33 percent finished it, and may have entered junior high school (JHS); (c) 29 percent finished JHS and possibly went to senior high school (SHS) and/or vocational school; (d) 12 percent were SHS/vocational graduates and possibly entered college; and (e) 10 percent were college graduates.

These are pre-pandemic numbers for household heads, who are likely already done with formal schooling. Lack of schooling is highly correlated with poverty and hunger. The 49 percent in (a) plus (b) are doomed to very low wages; so it is no wonder that Self-Rated Poverty is just as high.

Consumer classes: the ABCDE system developed by market research companies. This is basically a classification of dwellings from wealthiest (A) to poorest (E), as rated by the interviewers, based on external appearances and the quality of the neighborhood. It is very easy to implement in a survey; the business firms that commission the research are quite familiar with it.

The researchers know from their data that A-residents spend the most, and E-residents the least, on what they buy. The classification may be modified—each company has its own rules—by the presence of some home appliances. (See the 2002 book, “The Marketer’s Guide to Socio-Economic Classification of Consumers,” by Dr. Ned Roberto, marketing guru.)

These letter-groups have no standard names. A is on top, but B is upper-class too; C is middle-class in the cosmopolitan sense; D is the “masa”; E is very low-class. Upper-class households are so few that often they are combined into AB. SWS even combines the top three classes; its December 2019 survey found ABC 7 percent, D 75 percent, and E 18 percent.

Since 2012, the Marketing and Opinion Research Society (MORES), Philippine Statistics Authority, UP School of Statistics, and Philippine Statistical Research and Training Institute have tried to standardize the classification system. They have designed a survey instrument called 1SEC, or One Socio-Economic Classification. In 2018, MORES issued a 1SEC training manual to encourage trials by its members.

1SEC involves 19 questionnaire items, half of which are non-standard, plus a point system to apply to each answer (the more points, the higher the class). The system results in six classes, called “clusters,” which are numbered rather than named.

SWS tried out 1SEC in 2019, and found the lower clusters 1 to 3 (37 points or less) with 83 percent together, the middle clusters 4 and 5 (38 to 70 points) with 16 percent, and the top cluster (71+ points) with 1 percent. Results of trials by other institutions, either private or government, have not been released.

Income classes: the more precise, the more difficult to measure. The Consumer Expectations Survey (CES) of the Bangko Sentral asks simply: is your monthly income below P10,000, between P10,000 and P29,999, or at least P30,000? In the 1st Quarter 2022 CES, low-income households are 26 percent, middle-income ones are 40 percent, and high-income ones are 34 percent. Easy to implement; but with a most unrealistic boundary between “middle” and “high” incomes. The CES is done and reported quarterly.

Detailed income measurement is done by the very expensive Family Income and Expenditure Survey (FIES), which takes five hours of interview time, done twice in a reference year, covering six-months’ income at a time. The FIES has been a triennial survey to date, but Neda promises to make it biennial starting with reference year 2023.