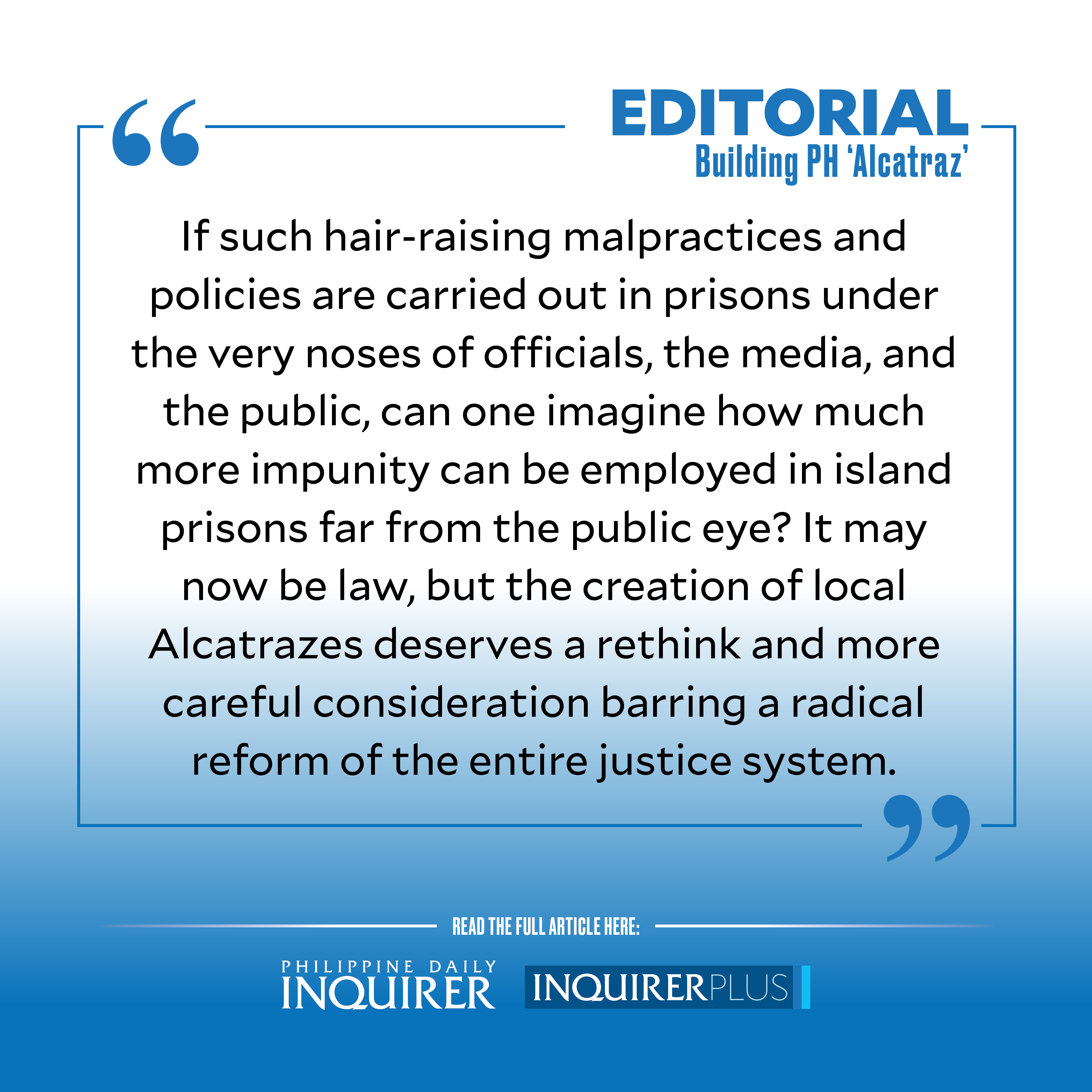 One of the most famous prisons in the world is Alcatraz Island, also known as “The Rock.” It was abandoned in 1963, but is still a famous tourist destination. Found in the middle of San Francisco Bay, it was considered nearly impregnable because the freezing waters made survival nearly impossible for those who managed to breach its walls. From 1934 to 1963, Alcatraz was used as a federal prison for prominent criminals, including Al Capone, George “Machine Gun” Kelly, and Robert Stroud, known as “The Birdman of Alcatraz.”

Incredibly, there is also a Filipino connection to Alcatraz, which served as a prison for American servicemen who had joined the Filipino cause in 1900 during the Philippine-American War.

Today, there is another connection, with Alcatraz serving as an “inspiration” for legislators who want to create not one but three local versions of the island penitentiary, one each for Luzon, Visayas, and Mindanao.

The measure creating the new prisons lapsed in law last July 30 after President Marcos failed to either enact or veto it after it was submitted to Malacañang.

Under the new law, the government is mandated to establish and maintain “a secure, clean and adequately equipped and sanitary” national penitentiary for “high-level offenders,” convicts found guilty of heinous crimes, or those sentenced to life imprisonment.

Senate President Juan Miguel Zubiri, one of the principal authors of the law, said in 2019 that the new prisons could be built on isolated and uninhabited islands, “far from their victims and society at large.”

Government will have no shortage of choices for the proposed “heinous crime facilities,” with more than 7,600 islands comprising the archipelago, and only 2,000 of them inhabited.

Still, even with plenty of locales available, building and, more important, maintaining a prison on an island is no joke. Alcatraz, for instance, was abandoned in 1963 because of rising costs, including having to ship potable water to the island every day, and ship out wastes at night.

Sure, overcrowding of prisoners has prevented government from maintaining its prisons as secure, clean, and adequately equipped with sanitary facilities. The New Bilibid Prison (NBP), for instance, is supposed to accommodate only 6,345 inmates but currently houses more than 28,000, or four times the original capacity.

Just to show how things have spiraled out of control in the NBP, two years after the last demolition of illegal structures in the facility, a new operation to dismantle the “kubol” (huts) occupied by high-profile prisoners was launched, following the escape of three of four inmates last Jan. 17, which followed riots last Jan. 2 that killed three prisoners and injured 14 others.

Gerald Bantag, director general of the Bureau of Corrections, argued that dismantling the structures was the authorities’ way of ridding the Bilibid’s persistent problem of illegal drugs and contraband. BuCor personnel seized at least 500 bladed weapons, improvised firearms, phones, pocket Wi-Fi, and other contraband on the first day of clearing; Bantag said more were expected to be confiscated.

Not only is the overcrowding and smuggling of banned items a problem found in prisons around the country, including local and provincial jails, these are also compounded by other issues and illegal activities bedeviling the justice system.

The kubol are but symptoms of the entire system of corruption and, yes, a crime that runs rampant in the prisons system. The drug smuggling, the crafting, and use of deadly weapons and banned communication gadgets are but the results of the negligence, if not connivance, of prisons officials. Perhaps the most “heinous” of these is the practice of using prisoners to carry out assassinations outside the facilities under the direction of higher authorities. This includes the use of convicted drug lords to testify against political opponents, the most prominent of whom is former senator Leila de Lima, as a form of vendetta.

If such hair-raising malpractices and policies are carried out in prisons under the very noses of officials, the media, and the public, can one imagine how much more impunity can be employed in island prisons far from the public eye? It may now be law, but the creation of local Alcatrazes deserves a rethink and more careful consideration barring a radical reform of the entire justice system.