Talking about books you have not read | Inquirer Opinion

Talking about books you have not read 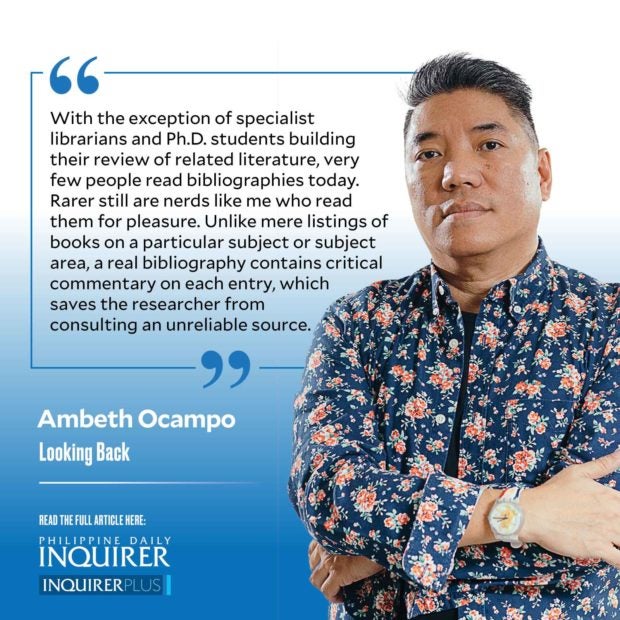 With the exception of specialist librarians and Ph.D. students building their review of related literature, very few people read bibliographies today. Rarer still are nerds like me who read them for pleasure. Unlike mere listings of books on a particular subject or subject area, a real bibliography contains critical commentary on each entry, which saves the researcher from consulting an unreliable source.

The first bibliography I ever bought was the “Union Catalog of Philippine Materials” (UP Press 1970-1976) compiled by Maxima Ferrer. I was drawn to the hefty two-volume hardbound set because it was the cheapest title in the bargain bin of the UP Press. When I reached into my pocket to pay, the cashier cast a sorry look and even tried to dissuade me by asking, “why are you buying these?” In the days before the internet, this was an invaluable research tool, for in its 1,738 pages were Filipiniana materials in 64 libraries in the country. It had a locator indicating which libraries had particular titles, saving me from useless trips. Its downside was a lack of commentary on the books aside from their physical characteristics (size, pages, etc.) and bibliographic data.

The first real bibliography I ever acquired was Wenceslao Retana’s three-volume “Aparato bibliográfico de la historia general de Filipinas: deducido de la colección que posee en Barcelona la Compañia general de tabacos de dichas islas.” Originally published in Madrid in 1906, it was reprinted in Manila by Pedro B. Ayuda y Cia in 1964, in a very luxurious edition with first-class paper and binding. I found Ayuda’s office address in the phone book and drove off to downtown Manila only to find the space shuttered with a notice from the Manila Sheriff’s Office that all the contents were to be auctioned to cover debt. I asked the neighbors who told me that Ayuda was a real eccentric who once served as the president of the Philippine Bar Flunkers Association. I tracked Ayuda down to his residence in Quezon City, but couldn’t afford the price he quoted for a set of the Aparato. Taking pity on me, the late E. Aguilar Cruz gifted me with his set, saved from the Manila Times Morgue when the paper was shut down in 1972 following the declaration of martial law.

Retana’s Aparato is a chronologically arranged, critically annotated listing of printed Filipiniana owned by the Compañia General de Tabacos de Filipinas beginning with Maximilianus Transylvanus’ “De Molvccis Infulis…” (1524), an account drawn from the survivors of the Magellan expedition, to the 4,460th title in the collection, “Memorial Elevado a Su Santidad El Papa Leon XIII por el Pueblo Filipino” (Manila, 1900). The Aparato provides a physical description of each book, sometimes a reproduction of its title page or illustrations, and, if the book is historically significant, Retana provided extended commentary. As a bonus, Retana also included “El Periodismo Filipino” in Vol. 3 of the Aparato, a chronological listing of Philippine newspapers from Del Superior Govierno (1811) to Excelsior (1905) that forms the early history of the Philippine Press.

Retana’s Aparato has been my secret weapon for the last three decades. Retana together with Trinidad H. Pardo de Tavera’s “Biblioteca Filipina” (Washington, 1903) and Jose T. Medina’s “Imprenta en Manila desde sus orígenes hasta 1810” (Santiago de Chile, 1896) were my guides in collecting rare Filipiniana. Despite being reprinted, these essential Philippine bibliographies remain largely inaccessible because of language, and the good news is that a translation of Retana’s Aparato from the original Spanish is being prepared for publication by Vibal Publishing.

Researchers limited to English are advised to dip into my favorite bibliographies: James Alexander Robertson’s “Bibliography of the Philippine Islands” (1908) and the World Bibliographical Series volume on the Philippines compiled by Jim Richardson (1989). The primary value of all these specialized bibliographies is that they provide a view of the Filipiniana landscape. Knowing what is available, and where, is the first step in research. More importantly, bibliographies make it possible for scholars to comment competently about books they have not read.