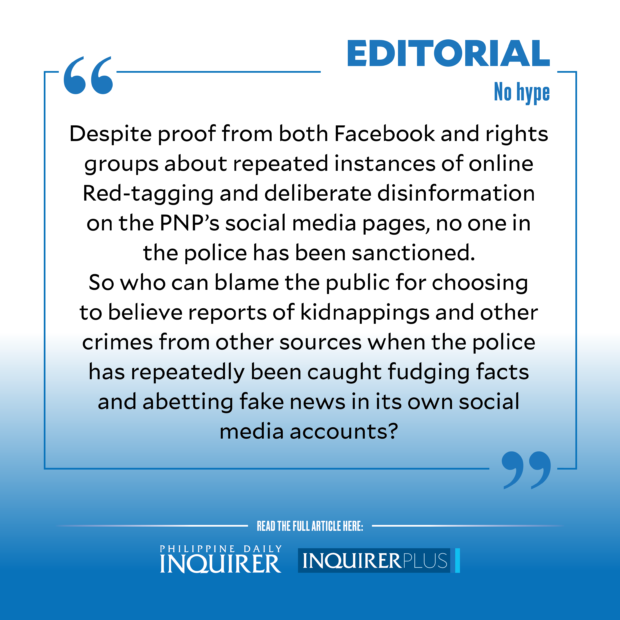 Philippine National Police chief Gen. Rodolfo Azurin Jr. has dismissed as “crime hype” what many see as a crime wave amid reports of a spike in kidnappings and petty street crimes.

Azurin attributed the rise in reported crime to a “sensational surge in social media reporting,” saying that many of the incidents cited had previously been reported and considered solved by the police, though he did not specify them.

“The peace and order situation in the entire country is still manageable. … Definitely, the crime rate is still low and we continuously aspire to bring it down further,” the police general said.

In fact, according to PNP spokesperson Police Col. Jean Fajardo, the number of crime incidents in the country recorded from January to August 2022 went down by 8 percent compared to data from the same period last year. Again, no specifics were given on how many crimes were recorded this year and last year.

“We were expecting an uptick in these cases because we have eased our quarantine restrictions … but the rest like physical injury, murder, carnapping, homicide went down,” Fajardo added, without elaboration.

Speaking in general terms, Azurin noted that “the peace and order indicator—or the sum of both index and nonindex crimes—has decreased by 45.24 percent under [President Marcos Jr.’s administration].” A check on PNP data, however, showed that the total number of crimes in the country almost doubled to 30,802 in July, a month after Mr. Marcos took over, compared with 15,651 in June, former president Duterte’s last month in office.

If the police’s intention was to calm and reassure the public that it was on top of the situation, the incomplete PNP statistics achieved exactly the opposite: Why the inconsistent and confusing information? What is the police trying to hide?

It didn’t help that Police Brig. Gen. Joel Doria, acting chief of the PNP Anti-Cybercrime Group, has threatened with criminal cases those spreading “fake news” over the rise in crime. “To all spreaders of fake news, remember this: we are watching you.”

Two weeks ago, the PNP Maritime Group’s official social media channels posted claims—without offering proof—that the slain opposition leader Ninoy Aquino was an armed rebel linked to the communist New People’s Army. Though the police later disowned and took down the post and vowed “to determine those responsible” for it, no PNP social media personnel has been held accountable so far.

This was not the first time that the police has been called out for posting fake news. Earlier in the pandemic, Facebook took down a network of some 276,000 accounts for what it said was “coordinated inauthentic behavior.” The same accounts, which were brazenly proadministration while burying the opposition under a slew of vicious misinformation, were found to be linked to the PNP and the Armed Forces of the Philippines.

Despite proof from both Facebook and rights groups about repeated instances of online Red-tagging and deliberate disinformation on the PNP’s social media pages, no one in the police has been sanctioned.

So who can blame the public for choosing to believe reports of kidnappings and other crimes from other sources when the police has repeatedly been caught fudging facts and abetting fake news in its own social media accounts?

The recent crimes involving young women who went missing and whose violated bodies were later found are particularly worrying for parents who have to send their children to in-person classes despite the frustrating lack of safe public transport.

The insistence of the police that there is “no connection” in these cases does not detract from the fact that these crimes happened within weeks of each other, and have remained mostly unsolved. Would they go the way of the yet unsolved cases of at least 30 missing men connected to “e-sabong”?

The cases of four women—Princess Dianne Dayor, 24; Princess Marie Conde Dumantay, 15; Josie Bonifacio, 40, and Jovelyn Galleno, 22, most of whom were reported missing in July and August and were later found dead—have prompted Gabriela party list Rep. Arlene Brosas to file a resolution asking the House of Representatives to conduct an inquiry.

Rather than denying that crimes have surged in recent weeks, the PNP would do well to focus its efforts on fulfilling its stated commitment “to serve and protect” the public. For starters, it can firmly implement the steps that Fajardo has outlined to deter crime: increase police visibility in crime-prone areas, with barangay officials as force multipliers, and with regular police patrols monitoring the streets. The PNP spokesperson said the PNP will maintain the 25,000 police officers it had deployed for the start of classes “to ensure that (in-person learning) will be safe.”

The PNP can also police its own social media pages to prove its fidelity to facts and reestablish its credibility that, in the face of its involvement in extrajudicial killings under the previous administration, has been left in tatters.