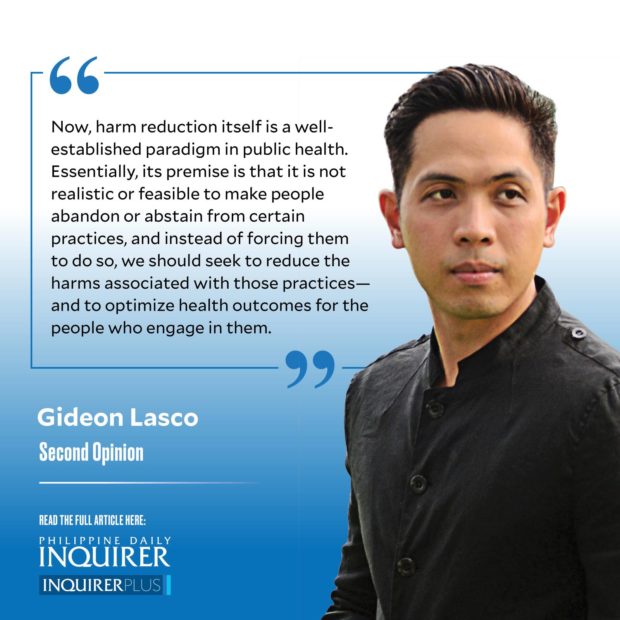 Of all the arguments that have been used to support vaping, the most prominent and perhaps the most compelling has been the idea of “tobacco harm reduction.”

Now, harm reduction itself is a well-established paradigm in public health. Essentially, its premise is that it is not realistic or feasible to make people abandon or abstain from certain practices, and instead of forcing them to do so, we should seek to reduce the harms associated with those practices—and to optimize health outcomes for the people who engage in them.

When it comes to HIV, for instance, a harm reduction approach involves promoting various options for people—not just abstinence—with the goal of reducing disease transmission. Numerous studies have shown that condom use and/or pre-exposure prophylaxis, for instance, are highly effective if used correctly and consistently. When it comes to drug use, one example that follows this approach is distributing sterile needles among people who inject drugs so that when they actually do so, they can do it without facing the very high risk of HIV transmission associated with needle sharing.

Opponents of such programs object on moral grounds, claiming that to offer such programs is tantamount to tacit approval, effectively encouraging and enabling risky practices. Former senator Tito Sotto, for instance, has blocked condom distribution in schools, saying that “it’s a crime to [encourage them to] indulge in sex”; he was also among those who blocked a needle exchange program in Cebu back in 2015. However, the benefits (e.g. efficacy and cost-effectiveness in preventing HIV) of harm reduction programs have strong empirical support, which is why they are a cornerstone of HIV/AIDS and drug policies in many parts of the world—including our neighbors Malaysia and Thailand.

It is also with the above logic with which e-cigarettes are defended. The nicotine is still there, the argument goes, but without the thousands of toxic chemicals in regular cigarettes, so getting smokers to embrace them represents a significant reduction of harm, especially since there are studies that report little or no long-term damage.

Critics point out, however, that while vaping represents harm reduction for those already smoking, it means additional harm to those who do not smoke in the first place—including young people. By being offered nicotine products in ways that are far more appealing to them than cigarettes, they will be exposed to nicotine-related harms, including the risk of dependence, as compared to not having used it at all.

They underscore that these harms are not insignificant, given that beyond nicotine, “vape juice” can contain ultrafine particles, flavorants like diacetyl, heavy metals, and volatile organic compounds, all of which can potentially damage the lungs and other organs. They add that given that vaping products were only introduced in the market in the mid-2000s, their long-term effects are not yet well established.

All of the above claims and counterclaims came to the fore in the Philippines amid the passage of the vape bill (a consolidated version of Senate Bill No. 2239 and House Bill No. 9007), which lowered the age of access to vaping products from 21 to 18, allowed flavorings that help convey harmlessness, opened the door for various forms of marketing, and transferred most regulatory power from the Food and Drug Administration (FDA) to the Department of Trade and Industry. With Duterte or President Marcos Jr. refusing to veto a bill that was touted by some lawmakers as a revenue-generating measure, it lapsed into law on July 25, despite objections from the Department of Health itself.

Regardless of how the new law will be implemented, the priority of all concerned should be to guarantee the safety of the products and ensure that members of the public—especially young people—are properly informed about the risks and harms of vaping, while recognizing the agency of the communities built around these practices. For this reason, I believe that the regulatory authority of the FDA should be restored so they can evaluate the components and overall safety of each and every product.

It should also involve the conduct and monitoring of research about the long-term effects of vaping, given that much remains unknown, with the recognition that as far as journal articles are concerned, critical appraisal is more important than the reported findings.

Finally, it requires openness on the part of our lawmakers, officials, and experts to change our laws and policies based on what the science truly says—including whether vaping represents harm addition or reduction.