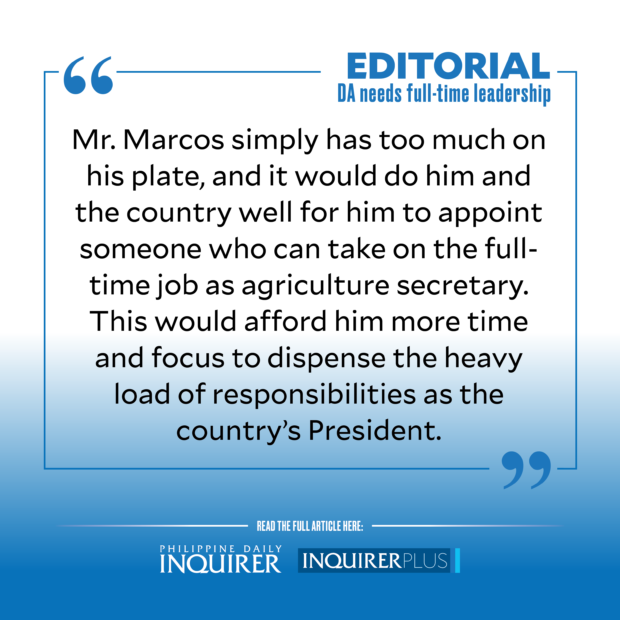 President Marcos Jr. pitched to Congress on Monday a record-high P5.268-trillion national budget for 2023 that will prioritize education, infrastructure, health, agriculture, and social safety nets to help the country recover from the setbacks caused by the COVID-19 pandemic.

In his budget message, Mr. Marcos told Congress that if approved, the 2023 budget anchored on his administration’s “Agenda for Prosperity” would help ensure the country’s economic transformation, with gross domestic product projected to grow by 6.5 to 7.5 percent this year, and by as much as 8 percent from 2023 to 2028. Poverty would be trimmed to at least 9 percent by the end of his term in 2028, he added.

“The formula for prosperity is simple: increase productivity with the overriding commitment to leave no Filipino behind, including Filipinos of the next generation,” the President said.

Perhaps to prove that the administration was serious about its ambitious goals, the agriculture sector will get one of the biggest budget increases next year: P184.1 billion or 39.2 percent more than its P132.2 billion allocation in 2022, including P29.5 billion for irrigation services.

The Department of Agriculture (DA) alone, which Mr. Marcos also heads, stands to receive an unprecedented 43.9 percent more next year for its programs and projects that were formulated “in anticipation of a global food crisis and for the long-term goal of food self-sufficiency,” according to Budget Secretary Amenah F. Pangandaman.

The move is in line with Mr. Marcos’ directive to prioritize the shrinking agriculture sector, with funds aimed at transforming this vital cog in the country’s economic engine from a “laggard to one of the main drivers for growth and employment” in 2023, the first full year of the Marcos Jr. administration.

The significantly bigger budget comes with the fervent hope that the DA and its attached agencies would be able to surmount the daunting challenges coming from all sides, each one demanding immediate and undivided attention.

Aside from the massive and complex sugar crisis that is proving to be the first major test of the fledgling Marcos Jr. administration, the President also faces urgent calls to rein in the spike in prices of basic commodities immediately, and address the shortage of other staples such as white onions, other vegetables, and protein sources such as pork and chicken.

These are on top of the perennial and still unresolved problems of depressed income among farmers, decreasing farmland, declining productivity, and rising production costs because of increased fertilizer prices and the effects of climate change.

Indeed, the challenges are daunting enough for a full-time secretary, what more for a sitting president, who has to oversee other pressing priorities including how to heal from the deep scars left by the protracted pandemic and quickly put the country back on the path to rapid growth.

Given the leadership and production crisis in the sugar sector, and the size and scale of the programs that the government wants to undertake in 2023, perhaps it would be wise for Mr. Marcos to heed the counsel of Sen. Risa Hontiveros for him to immediately appoint a “competent” person to lead the DA, one of the biggest bureaucracies in government with 17 attached agencies and corporations.

Hontiveros pointed to the “deeply problematic” issues at the DA, specifically the Sugar Regulatory Administration, whose leadership was overhauled by Mr. Marcos following reports of massive hoarding that contributed to raising the retail price of refined white sugar to more than double.

“This fiasco with the SRA is just the tip of the iceberg when it comes to the chaotic organization and operation of the DA. The President should reconsider his position and appoint a competent person who would take charge of the [agency], end all controversies in the department, and focus on helping farmers and ensuring adequate food supply in the country,” Hontiveros said. “The public will continue to suffer from more of these blunders if no reforms are made to the DA’s leadership structure,” she added.

The senator noted that the President already heads numerous government offices and is the Commander in Chief of the Armed Forces, making it “very difficult” for him to handle other responsibilities, including as DA secretary.

Mr. Marcos designated himself such after noting in his June 30 inaugural address that the agriculture sector “cries for urgent attention after years of neglect and misdirection.”

The still unfolding sugar crisis, however, proves that things are not moving quickly enough and that unnecessary confusion and dysfunction have, in fact, crept into the agency’s bureaucracy.

Such concerning development only shows that Mr. Marcos simply has too much on his plate, and that it would do him and the country well for him to appoint someone who can take on the full-time job as agriculture secretary. This would afford him more time and focus to dispense the heavy load of responsibilities as the country’s President.