Nuns in the crosshairs | Inquirer Opinion

Nuns in the crosshairs 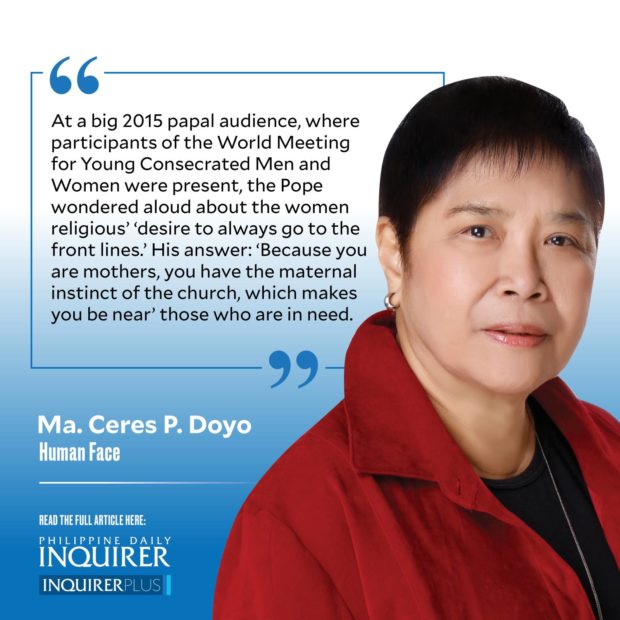 Calling himself “a bit feminist,” Pope Francis has pictured what the church would be like without the consecrated women religious: “It would be missing maternity, affection, tenderness, and a mother’s intuition.”

Hereabouts, some nuns who are ministering to needy, neglected communities in remote places feel they are being surveilled, if not persecuted, by government forces. I say forces because they are a fearsome lot, their words alone can translate into making life difficult for these women who have vowed to serve.

Sometime back, I did write a piece (“Catholic women religious in the trenches,” 7/12/2018) describing the difficult but liberating work nuns are doing here and all over the world.

They are in the news again. Inquirer news headline on Aug. 16, 2022: “Four nuns, 12 others charged with channeling funds to Reds.” The report said: “The Department of Justice (DOJ) has found probable cause to indict 16 individuals, including four nuns, for allegedly channeling funds to the Communist Party of the Philippines (CPP) and its armed wing, the New People’s Army (NPA), which were tagged as terrorist organizations by the government and other countries.”

The bank accounts of the Rural Missionaries of the Philippines-Northern Mindanao Region (RMP-NMR), to which the accused belong, have been frozen since 2019 for allegedly violating Section 8 of Republic Act No. 10168 or the Terrorism Financing Prevention and Suppression Act of 2012. I had interviewed the former RMP head Good Shepherd Sister Elenita Belardo who said that RMP’s funding came from the European Union, so how could it have been used for something illegal?

Yesterday, Belardo told me that sometime back, RMP head Sister Emma Cupin (one of the recently accused) went to the EU office in Makati City to submit all documents and books, with the EU office hiring auditors to examine them. “Nothing irregular was found,” Belardo said.

Of the 16 charged, four are nuns: Sisters Emma Teresita Cupin, Susan Dejolde, Augustina Juntilla, and Maryjane Caspillo, who are working with RMP.

RMP is not a religious congregation but is one of the mission partners of the Conference of Major Superiors in the Philippines (CMSP), a voice in the wilderness during the dark years of the Marcos dictatorship. RMP was founded 53 years ago.

Yesterday, RMP released a strong statement denying the allegations and questioning the credibility of the DOJ witnesses and their accusers’ motives. RMP’s opening salvo: “Why is the government—especially from Duterte to Marcos II—hell-bent in using all resources at its disposal to shut down the Rural Missionaries of the Philippines for good? … The DOJ’s charges are based on the testimonies of two so-called surrenderees. Based on information obtained by RMP, one of the two has been presented as a former NPA member after authorities arrested her mother. In exchange for her mother’s release, she executed a spurious statement accusing RMP members of channeling funds to the CPP-NPA…”

The July 14, 2022 CMSP convention statement already pointed out the plight of its workers on the ground: “Some among our ranks were red-tagged; irresponsible labels and name-calling will not cow us. To serve the people of God is never wrong…” I was told that a CMSP statement on the RMP case is forthcoming.

The DOJ accusation is serious. Channeling funds to a terrorist group violates the terrorism financing prevention law, which is being invoked against the 16 who are now facing 55 cases filed against them at the Iligan City Regional Trial Court. The 16 have yet to file their counter-affidavits. A perjury case against former RMP head Belardo filed way back in 2019 has not been dropped.

At a big 2015 papal audience, where participants of the World Meeting for Young Consecrated Men and Women were present, the Pope wondered aloud about the women religious’ “desire to always go to the front lines.” His answer: “Because you are mothers, you have the maternal instinct of the church, which makes you be near” those who are in need.

On the frontlines but also in the crosshairs of those who do not appreciate what these daring women do, who think of these women as subversives, as an affront, and a threat to the powers that be.