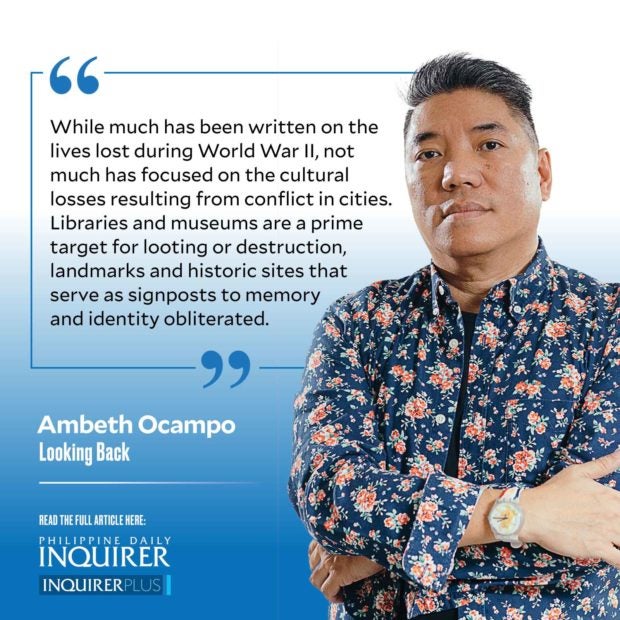 Two intertwined exhibits ongoing in Manila till the end of the month are worth visiting. A display of Rare Filipiniana in the National Library of the Philippines and “War in Cities” organized by the International Committee of the Red Cross (ICRC) and the Swiss Embassy. Like bookends, one focuses on loss of life and cultural property during conflict, while the other celebrates what survived conflict.

The ICRC could not have chosen a more relevant venue than Intramuros, the site of fierce fighting at the tail end of the Japanese occupation of the Philippines. In my many walks around Intramuros, I look closely at the ancient walls to make out the scars of history inflicted by shelling, bombs, grenades, and gunfire that leveled “the distinguished and ever loyal city of Manila” to rubble in 1945. If these walls could speak, they would relate the unspeakable, having mutely witnessed the murder, rape, and pillage of noncombatants caught in the crossfire between the Japanese and Allied forces. That conflict did not distinguish between men, women, children, the elderly, and the infirm who were killed, wounded, or severely traumatized. Gruesome reports of Japanese atrocities are available online, and make for disturbing reading and provoke nightmares 77 years since the end of the war. What is left out of the war crimes documentation, however, are our cultural losses.

The historical period, once known as the 1945 “Liberation of Manila,” is now correctly referred to as the “Battle of Manila” thanks to the persistence of the Memorare Foundation and the late Carmen Guerrero Cruz Nakpil (chair of the National Historical Commission, 1967-1971, and chair of the Manila Historical Commission, 1992-1998), who was widowed during the war and did not have the closure of finding her husband’s corpse. Mrs. Nakpil insisted that the so-called “Liberation of Manila” from the Japanese by the joint Allied and Filipino forces on March 3, 1945 obscured the month of terror and untold suffering that began on Feb. 3, 1945, when one side of Greater Manila was “liberated” while the cornered Japanese dug in for a last stand on the other side of the city, leaving over 100,000 dead and Manila in ruins.

While much has been written on the lives lost during World War II, not much has focused on the cultural losses resulting from conflict in cities. Libraries and museums are a prime target for looting or destruction, landmarks and historic sites that serve as signposts to memory and identity obliterated. Intramuros was razed to the ground by Japanese bombs and American shelling, leaving few structures standing like San Agustin Church.

Other buildings outside Intramuros, like the Legislative Building that housed the National Museum and the National Library, were destroyed, together with many irreplaceable items listed in a 1938 “Catalog of Paintings, Sculptures and Historical Objects.” Books, manuscripts, archival documents also went up in smoke, except for the priceless Rizaliana collection that was evacuated from the Legislative Building to, depending on the source you are reading, either a vault in nearby Manila City Hall or to a forgotten cabinet on the upper floor of the Philippine Normal School. Fortunately, not all of the National Library were lost or destroyed during the war: The Rizal manuscripts, as well as most of the rare Filipiniana from the prewar Tabacalera collection that includes early imprints, survived to inspire us to preserve and use them. Some of these are now on display at the National Library.

In the British Library, I once requested an obscure 18th-century book on the Philippines that could not be located despite the shelf mark clearly indicated in the catalog. A supervisor explained: “You have to blame the Germans for the loss of that book, it was one of the casualties of an air raid in May 1941.” When I asked why the book was still listed even if it didn’t exist, he repeated, “You have to blame the Germans.” He then narrated how books were evacuated to other sites for safekeeping and how the Germans promised not to bomb Oxford and Cambridge if the British would spare the university cities of Heidelberg and Tübingen (or is it Göttingen?). While the librarian’s story has no basis in fact, it is inspiring just to imagine that someone thought of preserving culture and learning from destruction in the midst of conflict in cities.