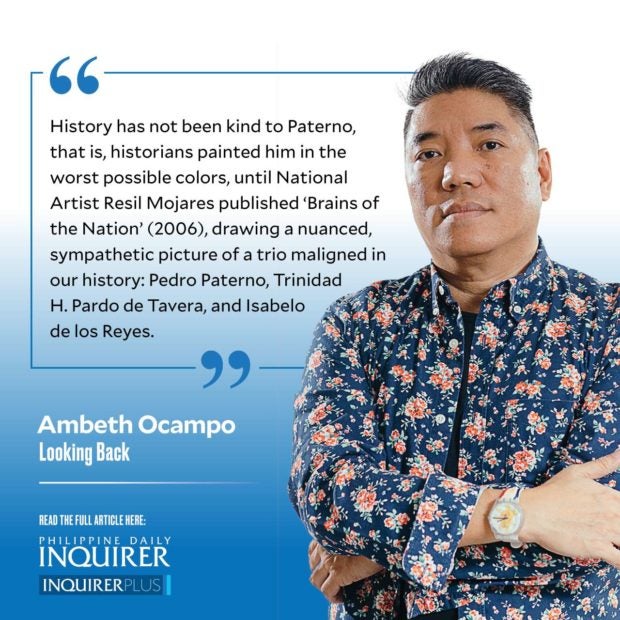 Two decades ago, bright-eyed and ignorant, I attempted to translate, from the original Spanish, Pedro Alejandro Paterno’s “El Pacto de Biyak-na-Bato” (Manila, 1910). My plan was to publish Biyak-na-Bato back to back with Paterno’s pioneering novel “Ninay” (Madrid, 1885), translated from the original Spanish by E.F. Du Fresne (Manila, 1907), under the mischievous title “Two Works of Fiction by Pedro Paterno.”

History has not been kind to Paterno, that is, historians painted him in the worst possible colors, until National Artist Resil Mojares published “Brains of the Nation” (2006), drawing a nuanced, sympathetic picture of a trio maligned in our history: Pedro Paterno, Trinidad H. Pardo de Tavera, and Isabelo de los Reyes. Mojares’ book, best described as a shameless display of erudition, situates Paterno’s peculiar writings and career in the context of the Filipino search for identity. Paterno figured in the nascent Filipino nationalism at the dawn of the 20th century, when the Philippines transitioned from Spanish to American colonialism with a stillborn Malolos Republic in between. The most recent work on him is the handsome two-volume “By Their Deeds: The Paternos of the Spanish Era” (2019), a labor of love by Jean Marie Yap Paterno and Miguel Roces Paterno who compiled a treasure trove of primary source material that can provide for a more positive assessment of Paterno.

I first heard of Paterno from Teodoro A. Agoncillo, who had nothing but disdain for the man he considered a turncoat or balimbing. Agoncillo was assigned to read Paterno’s historical works in the prewar UP Library, only to find them worthless. Following Agoncillo’s example, I checked out Paterno in the library and left awed by Paterno’s seven-volume “Historia de Filipinas” (1908-1912), three-volume “Historia Critica de Filipinas” (1908), and two-volume “Synopsis de Historia de Filipinas” (1911) whose covers list: 21 books, over 21 plays, a book of short stories, eight works in press, etc. In 1920, he became more modest, listing a mere 29 published works.

Fortunately, T. H. Pardo de Tavera’s “Biblioteca Filipina” (1908) spared me the trouble of plowing through Paterno’s prodigious output. Only eight of Paterno’s works are listed in Pardo’s “Biblioteca Filipina,” accompanied by the meanest comments I have ever read in a bibliography. On “La antigua civilizacion Tagalog” (1887): “Nothing serious, a work of pure fantasy, full of strange and incredible statements.” On “Los Itas” (1890): “… a buffoonery like so many others that abound in the work.” On “El cristianismo en la antigua civilizacion tagalog…” (1892): “Full of surprises for history, science and reason!”

Pardo had an axe to grind. “El Barangay” (1892), allegedly based on a 16th-century manuscript in Paterno’s collection, was undoubtedly plagiarized from an article Pardo published earlier in Revista Contemporanea (April, 1892). Pardo said some typographical errors in his article appeared in Paterno’s book! Pardo, the bibliographer, chose to ignore most of the works listed on the covers of Paterno’s books because:

“Detailed information is the only thing that can prevent the bibliographer from becoming an unconscious propagator of any falsehood. Duty compels us, imperatively, to point out here that the list of works that Mr. Paterno supposes to have published is an unworthy falsehood that cannot be excused, and that such a manner is indisputably typical of a vulgar impostor.”

Jose Rizal was a frenemy, never invited to Paterno’s glittering parties. Rizal made references to Paterno in his 1884 Madrid diary, but in code. In a letter to Ferdinand Blumentritt, Rizal described Paterno by drawing an undulating spiral to mimic the circles Filipinos draw around their ears with their index finger in reference to a crazy person.

Paterno’s critics are dead. Denunciation of his works and deeds by contemporaries remain largely unknown to a generation that does not read—a generation sadly separated from their past because of language. As I went through Paterno’s collection of paintings, sculptures, first editions, historical documents, and ephemera at Leon Gallery, I saw Paterno in a different light. I don’t know if it’s good or bad that the political balimbing was rebranded as art collector, bibliophile, and connoisseur of antiques.