Flashes of the past in ‘Katips’ | Inquirer Opinion

Flashes of the past in ‘Katips’ 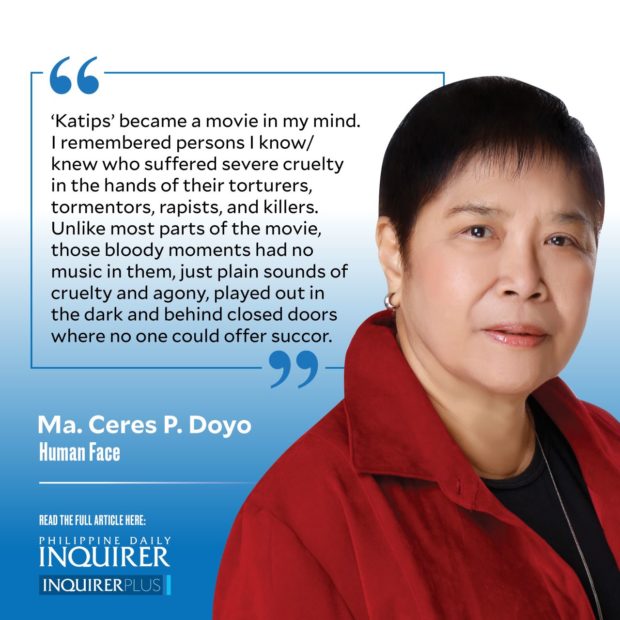 Many reviews have been written about the musical “Katips: The Movie”—some glowing, some the opposite, on how the story is told, the script, the music, the actors, the roles, what it is and what it is not, what is portrayed and what is missing, etc.

This piece is not a review.

I went to the cinema on the second day “Katips” (short for Katipunan) was showing and after I had already heard and read varying opinions, mostly from those who had lived through the dark years of martial rule and the Marcos dictatorship that serve as the backdrop of “Katips.” I sat in the darkened cinema, open to how it would speak to me and even entertain me (with its music).

After I had heard about the bloody torture scenes that had viewers cringing and looking away, I told myself: I will not blink.

I did not blink. I watched the blood-curdling parts through my tears. Because I remembered. “Katips” became a movie in my mind. I remembered persons I know/knew who suffered severe cruelty in the hands of their torturers, tormentors, rapists, and killers. Unlike most parts of the movie, those bloody moments had no music in them, just plain sounds of cruelty and agony, played out in the dark and behind closed doors where no one could offer succor.

If you had watched Mel Gibson’s “The Passion of the Christ,” you’d know what extreme cruelty looks like but as inflicted in the open for all to see and hear the utter humiliation of the holy one named Yeshua. The long-drawn scourging scenes made me ask with incredulity—“Why isn’t he dead yet?” But I digress.

Such scenes, and the ones in “Katips,” inspire meditation, but I do not want to engage in spiritual profundities here. Let me just say that “Katips” offered me moments to remember; it gave flashes of the past when courage shone, when the young, the brave, and the daring pushed the limits in the name of freedom.

My remembrances were played out, staged, if you may, through songs and choreography before me. Remembrances of particular persons I knew and events where I was present, some I had written about.

Through the character Aleta, I remembered Q, R, and S, who were raped by their captors. The torture scenes made me remember community organizer “Richie,” who guided our group through the hills of Central Luzon. One day, I learned that Richie was killed. I went to his wake with a nun-friend. There was only his sister at the small funeral parlor. Weeping, she told us that Richie’s corpse was dragged around the village by a military vehicle. I could see the rope marks on Richie’s neck.

I remember being present at the autopsy of the activist who was hit by a bullet during a rally. Dr. Sylvia dela Paz and Franciscan Sister Carmen Balazo watched with me. I took photos of the autopsy. I still have them.

The water cannons in the movie made me remember how the Metrocom hosed us down on Rizal Avenue. The water had red dye in it. After we were dispersed, we ran toward Sta. Cruz Church for safety. Sister Annunciata Salamatin, a Good Shepherd sister, bought dozens of T-shirts so we could change into dry clothes and avoid being arrested. I changed my clothes inside the confessional. Later, at the Good Shepherd convent in Paco, Sister Christine Tan proudly showed off her white veil that was stained with pink.

I remember the tear gas. Photojournalist Willy Perez has a photo of me “marooned” alone on the street island in Mendiola, enveloped in swirling smoke. Reuters’ Erik de Castro gave me two photos of myself being dragged by the Metrocom.

I remember the mountains I scaled (in Abra, Kalinga) to get to frightened villagers; the wilderness in Mindanao where we were to exhume missing persons. Thank you, Melvyn Calderon, for the photo of my barefoot self and the fact-finding team crossing a stream.

I remember driving along Kamagong Street in Makati with the late Chit Estella and being intercepted by armed cops (“Baba! Get down!”). My car was full of the newly published “Iron Hand, Velvet Glove” of the Ecumenical Movement for Justice and Peace. Sister Christine Tan and Fr. Ralph Salazar came to the rescue.

I remember going through military interrogations twice (1980 and 1983), the 10-million libel suit filed by a general who was not even in my story, the human rights lawyers who defended me and my editor.

“Katips’” throbbing music, composed for millennials, is the movie’s soundtrack for my generation by the younger generation. Thank you, director-actor Vincent Tañada and the cast and crew of “Katips.”