Cheaper medicines for all | Inquirer Opinion

Cheaper medicines for all 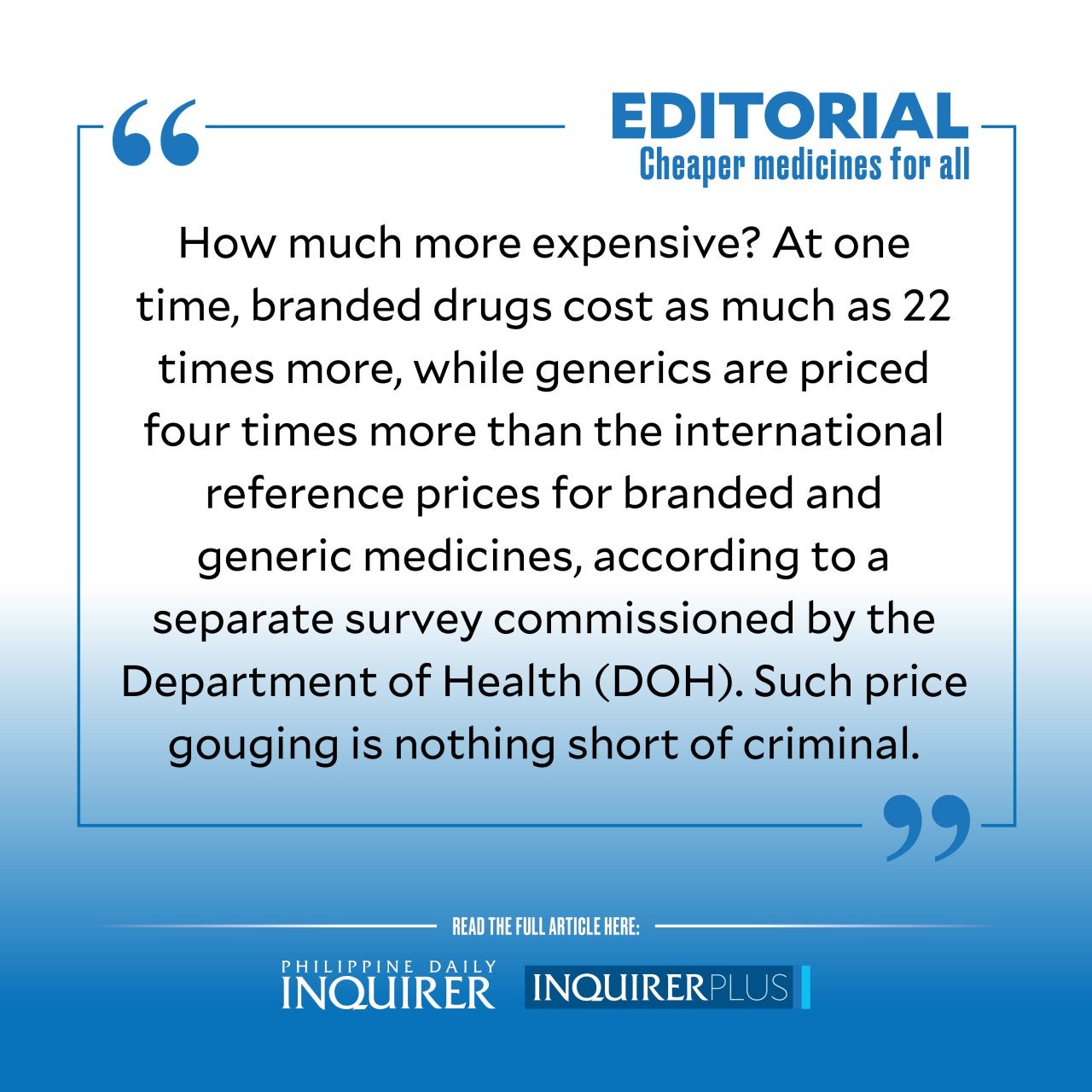 The long-held dream of having vital medicines that are affordable to most Filipinos may yet be realized following the meeting of minds last week between President Marcos Jr. and Prime Minister Narendra Modi of India, one of the world’s biggest manufacturers of pharmaceutical products.

In a brief phone conversation on Aug. 5, Modi expressed his desire to further expand longstanding bilateral relations between the two countries. At the same time, he assured Mr. Marcos of India’s “full support in his plans and projects for the Philippines’ development,” which includes the local production of generic drugs.

This is a welcome overture as Mr. Marcos had declared that he wanted to deepen ties with the South Asian nation known for its expertise in the manufacturing of medicines, particularly their more affordable generic or unbranded versions. These, he said, are suited for a developing nation like the Philippines where 23.7 percent of the population is considered poor.

Pharmaceuticals is one of the main economic drivers of India, the world’s sixth largest economy. For generics alone, it is the world’s largest manufacturer, accounting for one of every five generic drugs sold in the global pharmaceutical market.

“We could go into partnership so we could have [drug] production here in the Philippines,” said Marcos, “I have no doubt that our manufacturers can also do it, but we will get advice from India because of [its] experience.”

In his first State of the Nation Address, the President also called for the development of a domestic generic drugs manufacturing sector, and a level playing field in the industry to prevent cartels among drug companies.

Mr. Marcos’ ambitious plan to bring down the high cost of medicines is soothing music to the ears of Filipinos who believe that life-saving drugs in the country are more expensive than they should be.

A 2019 Pulse Asia report in fact reveals that 99 percent of Filipinos who need prescription medicines are unable to buy all of what they need because of the high cost, leading to unnecessary deaths or prolonged pain and illness.

How much more expensive? At one time, branded drugs cost as much as 22 times more, while generics are priced four times more than the international reference prices for branded and generic medicines, according to a separate survey commissioned by the Department of Health (DOH). Such price gouging is nothing short of criminal.

A separate 2019 report by global health insurer Mercer Marsh Benefits shows that, appallingly, drug prices in the Philippines are the second highest in Southeast Asia. This, despite the passage of the Universally Accessible Cheaper and Quality Medicines Act of 2008 meant to promote and ensure access to affordable quality drugs and medicines.

“It is unacceptable that a country like the Philippines, which is not even a high-income country, will have medicines as expensive as those in European countries,” Anna Melissa S. Guerrero, head of the Pharmaceutical Division of the DOH, lamented in 2020.

Past administrations have fortunately been aware of this major concern, with former president Duterte issuing Executive Order No. 155 in 2021 that put a price cap on 34 drug molecules or 71 drug formulas used in producing medicines for top health concerns in the Philippines, including hypertension, pulmonary diseases, diabetes, and Parkinson’s.

Much finger-pointing has been done to explain the reasons and culprits behind the scandalous prices of local medicines, with manufacturers and retailers trading barbs and accusations of profiteering.

But wouldn’t such energy be better used not just to look into the structural reasons behind the stubbornly high prices, but also to pull out all stops to bring in India’s drug manufacturing prowess into the Philippines? For a start, why not offer government incentives to entice Indian companies to set up shop in the country where they have a ready market of some 100 million Filipinos?

“Price negotiation, pooled procurement, and private sector partnership are mechanisms that must be implemented to drive medicine prices down,” stated the Pharmaceutical and Healthcare Association of the Philippines, which supports Mr. Marcos’ plan to promote healthy competition in the sector in a bid to reduce the cost of medicines. These mechanisms are already in place, the group added.

But the pronouncement still falls far short of what many Filipinos expect. Pulse Asia’s Ulat ng Bayan Report indicates that an overwhelming 73 percent of Filipinos want the DOH and the industry to work together to lower drug prices and make them at par with other countries.

About half of the respondents want the government to expedite the entry of cheaper generic medicines to the Philippine market, while 42 percent want to impose fines on companies that illegally increase the price of medicines.

These strong sentiments should prod the government and the private sector to buckle down to work to redeem the promise of cheaper and effective medicines for all.