‘Maid in Malacañang’: A biased review 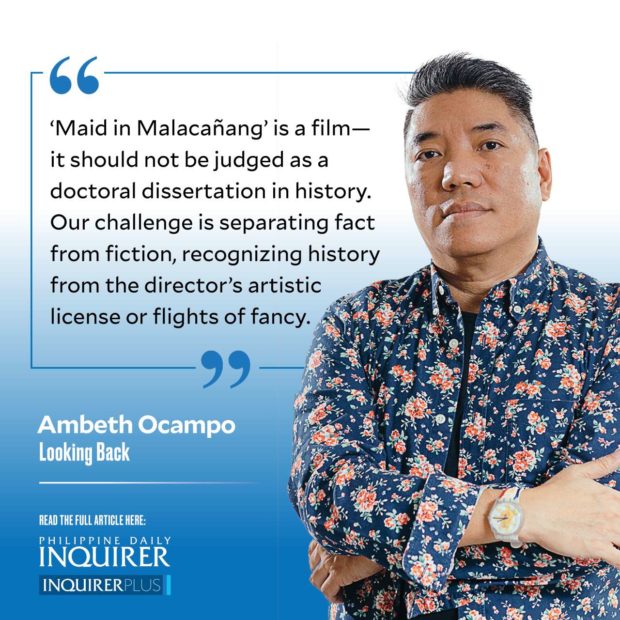 Much of what is said online against “Maid in Malacañang” are from people who haven’t even watched the film. Full disclosure, I endured the film in Ayala Cebu the other day, so this frank review is not tsismis. But the film, largely based on one unidentified person’s jaundiced narrative, is tsismis.

Despite the distribution of thousands of complimentary movie passes and a captive 30 million fanbase, the theater was not as jampacked as I expected it to be. To be fair, viewers were attentive, laughed in the right places, and applauded at the end. I joined in the clapping too, but more from relief than appreciation. Almost two hours of Cristine Reyes as Imee Marcos bought me perpetual plenary indulgences. Imee was depicted as a pouting, petulant, entitled b*tch in the opening scene who degenerated into a shrill, hysterical banshee for most of the film. As creative consultant and producer of the film, one wonders if Imee approved of the director’s treatment that failed to encourage pity, or at least empathy, for the Marcoses in their last 72 hours in Malacañang before they were driven into exile by the 1986 people power.

In one scene, Imee emerges dolled up like Madonna to spite her terno-iconic mother, confident in the affection of her doting father. In contrast, Bongbong, in military fatigues the whole film, was depicted as a whimpering child of a man desperate for his father’s attention and approval. To add insult to injury, Bongbong appears in an Oedipal scene in bed with his mother, who wails about being driven from the Palace, never to return. Then and there, Bongbong vows that they shall return, with the scene concluding with the camera focusing on one pair of Imelda’s fabled 3,000 shoes, with an inventory tag that reads: “IRM 2022.”

FEATURED STORIES
OPINION
Education and the state of the Filipino family
OPINION
Go for the ‘big circle’!
OPINION
Kulturkampf: ‘Katips’ vs ‘Maid in Malacañang’

Irene Marcos Araneta, the least political, the most good-looking, and lovable of the three Marcos children, was badly played by Ella Cruz, she who said “history is like tsismis.” Unlike the real Irene, the reel version is a clueless idiot. Cruz was provided with a dramatic scene, where she tries to convince her father to leave the Palace. Alas, her whining and mock tears will not win her a FAMAS Award and that is not tsismis. This pivotal scene has Cesar Montano as Ferdinand Marcos Sr. asking the viewers: “Masama ba akong tao?” History has answered that rhetorical question: He was driven from the Palace, hounded by lawsuits till the day he died in exile in Hawaii. The suppressed Marcos narrative, provided by Imee Marcos, is that the Marcoses were driven from Malacañang by fair weather friends who looked down on them for their provincial and nonelitist origins.

Some years ago, after a presentation on the Marcos Diaries at the East-West Center in Hawaii, the first question from the floor came from a crying lady who identified herself as one of the nurses who accompanied the Marcoses into exile. She took exception to my saying that the Marcoses fled the Palace in 1986, and declared: “Marcos did not flee, he was kidnapped by the Americans, and flown to Hawaii instead of Paoay.” I replied, “If the Marcoses and their close-in staff were not airlifted by the Americans from Manila to Hawaii and the mob caught them in Malacañang, perhaps you would not be alive to ask your question.”

The three maids in Malacañang echo the above sentiments with a new twist: The 1986 revolution was peaceful because the Marcoses didn’t retaliate; they didn’t want violence, pain, and death. Cesar Montano’s talents were not maximized in the film, his performance wooden and colorless as the grainy archival footage of Marcos declaring martial law in 1972. Marcos looks trim in a barong, weak in the crumpled clothes and funny hat he appeared with on his arrival in Hawaii, a far cry from the wasted man who left soiled diapers in Malacañang.

“Maid in Malacañang” is a film—it should not be judged as a doctoral dissertation in history. Our challenge is separating fact from fiction, recognizing history from the director’s artistic license or flights of fancy. Cory Aquino playing mahjong with Carmelite nuns when the fate of the nation hung in a balance is way over the top. Leaving the theater, I felt sorry for President Marcos Jr., who was badly portrayed. What the President and his supporters should ask in the aftermath of this twisted retelling of history is, with an ate or eldest sister like this, who needs enemies?

Read Next
We made July ‘puráut’
EDITORS' PICK
House energy committee chair Arroyo bats for cheap electricity
Powered by style, innovation and passion
PH resumes talks with China on Chinese-funded transport projects
In Borongan, nuns play hoops (not mahjong)
Why Tagle is a leading papal contender
A laptop that maximizes your WiFi so you can maximize your productivity
MOST READ
Imee Marcos bares illegal importation of white onions
John Arcilla cries foul over death threats for his ‘Ang Probinsyano’ role: ‘Serye lang, walang personalan’
Why Tagle is a leading papal contender
Marawi Grand Imam withdraws support for Robin Padilla over same-sex union bill
Don't miss out on the latest news and information.