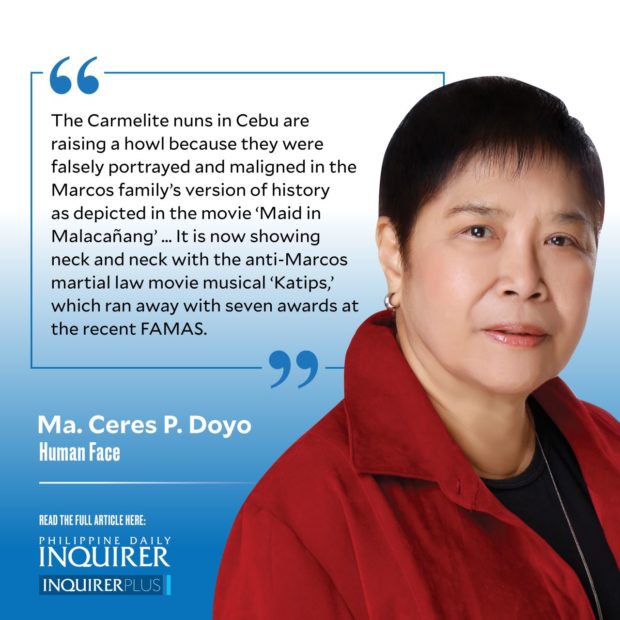 My first “encounter” with the Carmelite nuns (of the Order of the Discalced Carmelites) was while reading “The Song at the Scaffold” by Gertrud von Le Fort for a review for English class. It is about a community of nuns in Compiègne, France, who were guillotined during the French Revolution. I was smitten. I was barely out of my teens when I tried reading “The Interior Castle” of St. Teresa of Ávila (1515-1582), but I couldn’t get past a few pages at that time. (I still have that copy.)

St. Teresa was proclaimed “doctor of the Church” in 1970, the first woman to be so honored in the Catholic Church. In Spain, she began to reform the ancient Carmelite order that had its beginnings in Mount Carmel in Israel. Her most quoted words for this day and age: “Nada te turbe … Solo Dios basta.” Near my writing area is an enlarged, laminated copy in her own handwriting that reminds me not to be troubled because “God alone suffices.”

I have since learned more about the Carmelite order and several individual Carmelites personally, women and men, who live the life in contemplation, silence, prayer, and service. I had written about the late Bishop Julio Labayen, OCD, an advocate of liberation theology, and Sister Teresa of Jesus, OCD (University of the Philippines professor and prolific writer Josefina Constantino), now 102 years old. Those stories are in my book “You Can’t Interview God: Church Women and Men in the News” (Anvil, 2013). The 21 Carmelite monasteries for women in the Philippines are considered powerhouses of prayer.

The Carmelite nuns in Cebu are raising a howl because they were falsely portrayed and maligned in the Marcos family’s version of history as depicted in the movie “Maid in Malacañang” (directed by Darryl Yap). It is now showing neck and neck with the anti-Marcos martial law movie musical “Katips,” which ran away with seven awards at the recent FAMAS. Congratulations, director Vincent Tañada.

“Well-meaning friends have brought to our attention pictures, supposedly coming from the film ‘Maid in Malacañang,’ which are now trending on social media. The pictures depict the late Cory Aquino together with some religious sisters. The nuns are not wearing our brown religious habit. But if these pictures are portraying the events of February 1986, then the allusion to the Carmelite Order in Cebu is too obvious for anyone not to see.

“Let it be known that no one responsible for the production of the movie came to us to gather information on what really happened. Any serious scriptwriter or movie director could have shown such elementary diligence before making such a movie. After all, many of those nuns in [the] Carmelite Monastery of Cebu in 1986 are still very much alive and mentally alert. Among them is Sr. Mary Aimee Ataviado who was the superior at that time.

“The attempt to distort history is reprehensible. Depicting the nuns as playing mahjong with Cory Aquino is malicious. It would suggest that while the fate of the country was in peril, we could afford to leisurely play games. The truth was that we were then praying, fasting, and making other forms of sacrifices for peace in this country and for the people’s choice to prevail. While in our prayer, we were constantly in fear that the military would come to know of the whereabouts of Ms. Cory Aquino and would soon be knocking at the monastery door. We knew the dangers of allowing Ms. Cory Aquino to hide in the monastery. But we also prayerfully discerned that the risk was worth it, as our contribution to put an end to a dictatorial regime. Indeed, we were ready to defend her at all cost.

(There is a photo of Cory with the nuns. A few days later, she would be sworn in as president and people power would drive the Marcoses out of Malacañang and into exile. -CPD)

“Thus the pictures would trivialize whatever contribution we had to restore democracy. But there is more to the pictures than the trivialization. Over more than seven decades, Cebuanos have asked us to pray for their intentions. With the grace of God, we take this vocation to pray for and with the people in all seriousness. But … if these pictures would be taken as authentic representation of what really happened, they would put into doubt the trust that the people have placed in us.

“Lastly, we are praying for the unity of Filipinos. But this unity can only be built on truth and not on historical distortion.”