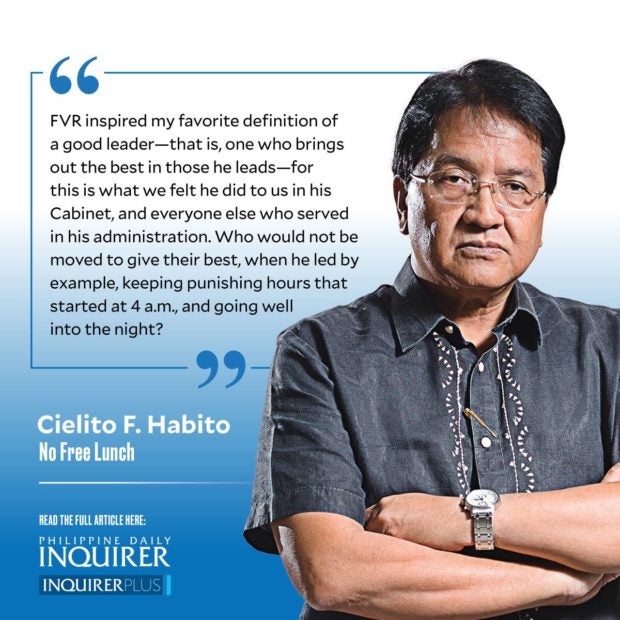 The country lost one of its greatest presidents last Sunday. For me, Fidel Valdez Ramos (aka FVR) was the greatest, perhaps because I was privileged to witness and experience his exemplary leadership up close, as a member of his Cabinet through all six years of his presidency. Since then, he has remained my foremost standard for good leadership, and my best model for the kind of president this country needs.

FVR inspired my favorite definition of a good leader—that is, one who brings out the best in those he leads—for this is what we felt he did to us in his Cabinet, and everyone else who served in his administration. Then and now, my former colleagues at the National Economic and Development Authority have had nothing but good words to say and nothing but fond memories to recall of his leadership. Who would not be moved to give their best, when he led by example, keeping punishing hours that started at 4 a.m., and going well into the night? Nearly all of us in his Cabinet experienced 5 a.m. telephone calls from him, and we knew he would have already gone through the day’s newspapers then, because his early morning instructions were usually prompted by something he had read in the day’s news. It was common for us to find, upon arrival at the office in the morning, faxed copies of newspaper clippings with handwritten marginal instructions from him.

We will always remember him for special letters that marked his presidency: UST, CSW, and the five Ds.

UST stood for unity, solidarity, and teamwork, a doctrine he preached from Day One of his presidency. In the very first Cabinet meeting after his oath-taking at Rizal Park, he gave us a “sermon” where he made clear that he expected “UST” from all of us. He admonished us against public debates or disagreements, especially through the media. Decisions were to be based on consensus, and debates kept behind closed doors. Should any of us disagree with the achieved consensus or majority position, he/she was to “shut up, or ship out.”

And then, there was CSW (completed staff work), a standard he held his officials to, drawing from his military background. Formally defined, subordinates submitting written recommendations to a superior must ensure that the latter only needs to review the submitted document and indicate approval or disapproval. The submission must document the research done and analyses made on alternative courses of action, and conclude with a specific recommendation for action by the superior. FVR would not sign any presidential issuance unless convinced that CSW had been satisfied. He once explained that seeing the signatures of all concerned Cabinet members on the transmittal letter to him would be concrete proof that proper consultation and coordination had been done, and that CSW was satisfied. When Malacañang returned our submissions with those three letters written with his trademark red Flair pen, we knew it amounted to a rebuke that we hadn’t done our homework enough.

But it was his five Ds summing up his economic strategy—democratization, decentralization, devolution, deregulation, and sustainable development—that brought us back on the world economic map during his presidency. Some of his Ds were not without critics, but his vision was clear, and his determination firm. He spurned “trickle down” economics and believed that people empowerment should go hand-in-hand with the pursuit of global competitiveness. And with the economic dynamism we achieved under his watch, his strategy proved effective.

I appreciated him most for his soft heart. Being the youngest in his Cabinet then, with five young children who saw their father more on TV than in the flesh, I requested from this seven-days-a-week president that if I had to be with him on a Sunday, could I bring my family along—and he kindly agreed. Once I brought my then 11-year-old daughter to a weekend working session to finalize his State of the Nation Address. He humored her with a gift of a red Flair pen, and a copy of the Sona he asked all Cabinet members present to sign with it—mementos she has treasured to this day.

Rest peacefully in God’s loving arms, PFVR. You will be sorely missed.