ICC probe: Too hot to handle 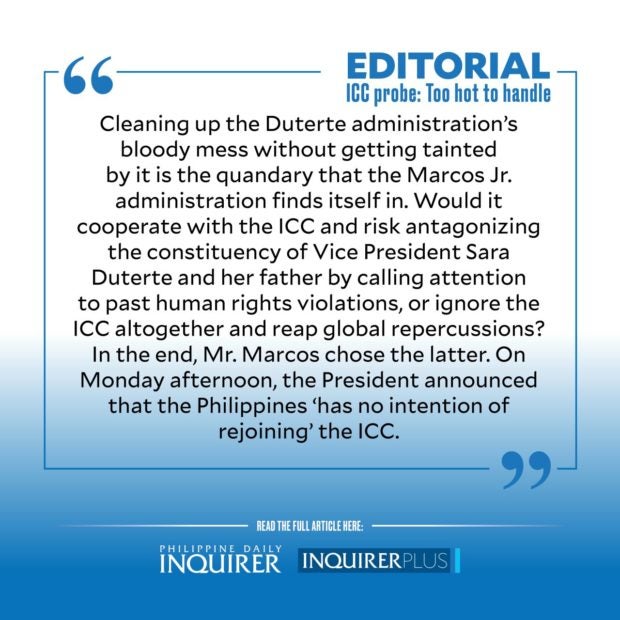 Initially, it seemed that President Marcos Jr. took a proactive stance when he met with his key legal advisers last week to discuss the government’s position on the International Criminal Court’s (ICC) investigation of drug war killings under his predecessor, President Duterte.

But the officials did not disclose what decision was reached during the meeting.

Said Guevarra: “We have discussed with the President our legal options regarding the ICC case. We have all come to an agreement, but it may not be prudent to publicly disclose it at this time.” He added that they were leaving it to the President “to make any disclosure at this time.”

Yet, the signals were there.

Guevarra, as justice secretary of the Duterte administration, had been at the forefront of fending off the international tribunal’s investigation. In a speech in June 2020, he assured the United Nations Human Rights Council of the government’s commitment to addressing the drug killings in police operations.

Then, there’s Mr. Marcos’ legal counsel Enrile, also a Duterte supporter, and Roque, who had disparaged the ICC in defense of the former president, and is now Mr. Marcos’ “private counsel.” Both can hardly be expected to take a position inimical to the interest of their boss’ political ally.

But it is Remulla’s “opinion” that seemed to indicate where the Marcos Jr. administration is headed when it comes to this thorny issue. Said Remulla: “It’s my opinion that they have no jurisdiction over our country when it comes to these things that they want to investigate because we are not any more members of the ICC.”

Such position had earlier been clarified by the ICC, which said that while the Philippines on March 17, 2018, upon Duterte’s order, withdrew from the Rome Statute that created the court, the ICC “retains jurisdiction with respect to alleged crimes that occurred on the territory of the Philippines while it was a State Party, from 1 November 2011 up to and including 16 March 2019,” a period that covers the killings all the way back to Duterte’s term as Davao City mayor.

But, perhaps, the most telling was Mr. Marcos’ silence about adherence to human rights in his first State of the Nation Address, which left people guessing on how the new government would deal with the basic issue of rights and freedom.

Back in November, Eduardo Malaya, Philippine ambassador to The Netherlands, formally asked for a halt to the investigation, saying the government had “undertaken, and continues to undertake, thorough investigations of all reported deaths during anti-narcotic operations in the country in accordance with the relevant procedures.”

But Khan described the justice department’s review of drug war killings involving the police as a mere “desk review” that does not merit a deferral of the process.

“I have concluded that the deferral request by the Philippines is not warranted, and that the investigation should resume as quickly as possible,” Khan said in a statement in June.

Cleaning up the Duterte administration’s bloody mess without getting tainted by it is the quandary that the Marcos Jr. administration finds itself in. Would it cooperate with the ICC and risk antagonizing the constituency of Vice President Sara Duterte and her father by calling attention to past human rights violations, or ignore the ICC altogether and reap global repercussions?

In the end, Mr. Marcos chose the latter. On Monday afternoon, the President announced that the Philippines “has no intention of rejoining” the ICC. Mr. Marcos echoed the position of his justice secretary that the ICC investigation is not necessary since the government is continuing with its own investigation of the drug war killings.

This is an unfortunate, if not unexpected, position, one that sends the wrong message to the international community so early into Mr. Marcos’ term when policy signals are keenly watched by investors and allies in the democratic sphere. Domestically, it will stoke seething sentiments about the curtailment of human rights, and the justice still denied victims of the brutal drug war.

There is no doubt that being counted as part of the internationally recognized criminal justice court fighting global impunity is in the best interest of the country and its citizens, but this has proved too hot to handle for the new administration.

Read Next
FVR’s firm and soft legacies
EDITORS' PICK
House energy committee chair Arroyo bats for cheap electricity
Metro Manila’s COVID-19 cases on downward trend, but surge not over — OCTA
Unleash the photographer in you this World Photography Day with vivo smartphones
Look Through: The fate of impounded stray dogs
What to watch out for when selecting a video surveillance solution
Palace warns sugar hoarders after raid on Pampanga warehouse
MOST READ
Man abducted in Batangas gasoline station, found dead in Quezon
LOOK: Miel Pangilinan dazzles in glittery pre-debut shoot
PNP bars US legislators’ visit to De Lima due to lack of authority from court
WATCH: Rick Astley re-creates ‘Never Gonna Give You Up’ music video 35 years later
Don't miss out on the latest news and information.