‘A loss for women everywhere’ 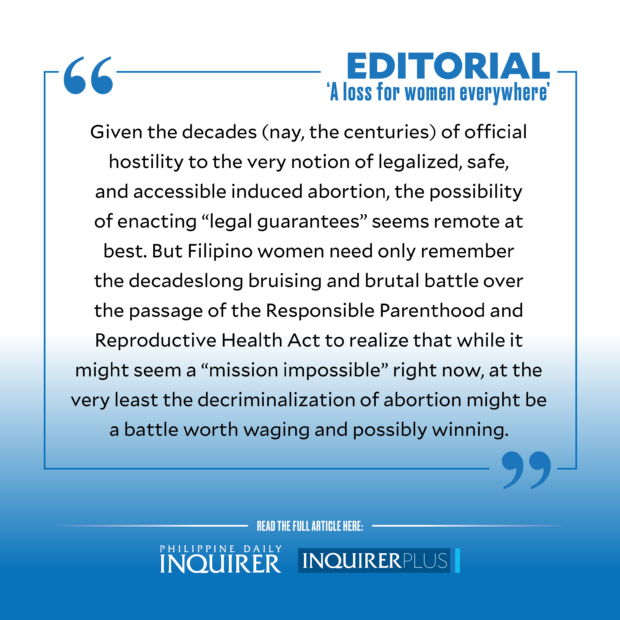 The Philippines has one of the most restrictive laws when it comes to abortion,” says reproductive rights advocate Ana Santos. “It is one of the remaining countries where women who access abortion and the health care staff who provide abortion services can be punished with fines and up to six years of imprisonment,” Santos writes in her column “DASH of SAS.”

Indeed, not only is abortion considered a crime in our country, public discussion of it is repressed and considered reprehensible. And yet, as Santos points out: “In the eyes of the law, abortion is a crime. In the reality of women’s lives as told in tentative whispers and in hushed conversations, abortion is an open secret.”

So, why should the recent US Supreme Court ruling overturning what many have called the “landmark 1973 Roe v. Wade ruling” that recognized women’s constitutional right to abortion, concern Filipinos—men, but especially women?

Because, as New Zealand Prime Minister Jacinda Ardern declares: The decision was “a loss for women everywhere.” She adds: “Watching the removal of a woman’s fundamental right to make decisions over their own body is incredibly upsetting.” US House of Representatives Speaker Nancy Pelosi was even more brutal. What she called the “Republican-controlled Supreme Court” has done is no less than achieving its “dark and extreme goal of ripping away women’s right to make their own reproductive health decisions.”

For Filipino women, lack of access to safe and high-quality reproductive health services, including abortion, has had truly deadly consequences. Health data reveal that an estimated 100,000 women are hospitalized annually due to complications related to unsafe abortions, with about 1,000 of them dying.

The death toll arises from the alarmingly high number of abortions performed each year, with 610,000 recorded in 2012.

Abortion is also a lot more common than many may think. US studies show that one in four women will need an abortion by the time she reaches age 45. If that woman were your wife, sister, friend, or daughter, you’d better hope that whatever the reason, she would have access to a health services provider who is trained and provides safe, sanitary, and humane treatment.

“In 2022,” says the Philippine Safe Abortion Advocacy Network in a statement reacting to the Roe v. Wade ruling, “no woman should still be fighting for their basic rights. The health and safety of every woman should not be debated.” The group urges governments, including that of the Philippines, “to step up and respond to this devastating setback with progressive reforms providing adequate legal guarantees and protections to safe abortion.”

Inquirer columnist Anna Cristina Tuazon wrote that by removing the constitutional right to privacy and bodily autonomy, the US high court’s ruling has “far-reaching implications on our private lives and intimate relationships.’’ “The issue of abortion then risks being solely about the right of the unborn child and not about the rights of women,’’ Tuazon wrote.

Given the decades (nay, the centuries) of official hostility to the very notion of legalized, safe, and accessible induced abortion, the possibility of enacting “legal guarantees” seems remote at best. But Filipino women need only remember the decadeslong bruising and brutal battle over the passage of the Responsible Parenthood and Reproductive Health Act to realize that while it might seem a “mission impossible” right now, at the very least the decriminalization of abortion might be a battle worth waging and possibly winning.

At the moment, it would be best to revisit how the reproductive health law has been implemented, and whether women and families had better access to reproductive health services since its passage in 2012. Under the law, the local government units, under the guidance of the Department of Health, are mandated to provide the full range of responsible parenthood and health services, including access to family planning methods for all its constituents.

True, even in the implementation of the reproductive health law, supporters continue to face daunting obstacles that stem not from legal impediments but from deeply held and entrenched attitudes and hostility against women’s rights and autonomy, even if it involves something as intimate and private as control over her own body.

At the end of the day, isn’t this precisely the battle that women, and the men who love, respect, and support them, need to dedicate their lives to? Isn’t it a gift worth leaving to the girls following in their footsteps, and treading the same road to autonomy and self-respect