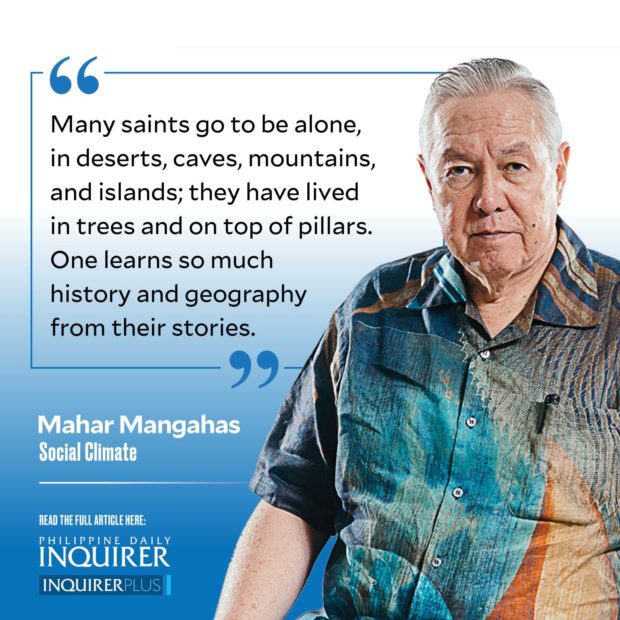 I started last Thursday with my daily routine of sending out my choice saint of the day to relatives and friends, which was (smoothened from text-speak):

“June 30: First Martyrs of Rome, 64. The Great Fire of Rome started on July 18, 64; fanned by summer winds, it lasted 6 days and destroyed over two-thirds of Rome. The mad emperor Nero blamed the Christians; he martyred thousands, starting on August 16, a ‘night of horror.’ Nero was soon deposed, and committed suicide in 68, at age 30. [Vatican City’s Piazza dei Martiri is on the left of St. Peter’s as one faces the cathedral. This Feast was created in 1969.]”

This habit started from finding, in a second-hand shop circa 2003, “The Lives of the Saints” (1951) by Omer Englebert, a French priest. It has a short bio of one saint and a list of about four minor saints, for every day of the year. I was intrigued by Father Englebert’s blurb:

“If this saint did things which do not have your entire approval, reader, reflect that the customs of his time were not those of our own. … And if, seized with a desire of emulation, you decide to attempt holiness for yourself, you can always begin by imitating the example of the saints who please you, before following in the steps of the ones who put you off.”

[I consider myself an accidental Catholic, by the way. Baptized at age 5 in the Ateneo Grade School on Padre Faura. When a priest announced there would be First Communion for those without it yet, a classmate blurted out, “You, Mahar! You’re a Protestant!” To which I indignantly shouted back, “How can I be a Protestant when I don’t even know what a Protestant is!” But my classmate was correct. I was put in Ateneo for the simple reason that in UP Diliman where we lived there was no primary school yet in 1949. I was Catholic in school, not at home.]

Gradually I came across more and more such books, until doing a daily saint story became a serious hobby. I have a one-volume “Butler’s Lives of the Saints,” condensed from his massive 12-volume, one per month, compilation. I have the Oxford Dictionary of Saints, which favors the British and Irish as much as Englebert favors the French and continental.

Precious for me is “The Golden Legend” by Jacobus de Voragine, the 13th century bestseller that was Ignatius de Loyola’s reading while recovering from his cannonball wound. Fanciful is fun: St. Brigid, whose cows produced beer instead of milk so that she could be hospitable to visiting monks; St. Kevin, on whose hand a bird laid an egg, and kept it closed until the egg hatched and the young bird could fly away.

I specially recommend “All Saints: Daily Reflections on Saints, Prophets, and Witnesses for Our Time” (1997), by Robert Ellsberg, who, though Catholic, includes Galileo Galilei, Johann Sebastian Bach, Mohandas K. Gandhi, Martin Luther King Jr., Oskar Schindler, and other non-Catholics. The traditional day for memorializing a saint is her/his death-day, not birthday, by the way.

Cults are basically people-based. Canonization is just a bureaucratic requirement. There are other Christian churches aside from that headquartered in Rome, and just as old. There are Muslim saints too; I will learn more about them inshallah.

Many saints go to be alone, in deserts, caves, mountains, and islands; they have lived in trees and on top of pillars. One learns so much history and geography from their stories. Locating their shrines via Google is a form of tourism in pandemic times. Filipino saying: let us look at the past in order to get where we want to go.

Like most Filipinos, I believe in miracles and the supernatural. The surveys on religion by the International Social Survey Program (www.issp.org) show us as one of the most religious peoples in the world.

The leading spirit behind the ISSP surveys was Fr. Andrew M. Greeley (2/5/1928-5/29/2013). It was my good fortune to meet and interact with Father Andrew personally. He was a great sociologist, journalist, and novelist (his “White Smoke” is about a formerly-married man who becomes a priest, rises in the hierarchy, and eventually becomes the Pope). Yet he advised in his biography to call him simply a priest rather than a hyphenated anything.

He said that story-telling—the best example being Jesus of Nazareth—is a very effective way to be a priest; so that is what Andrew Greeley did. His name goes on my own saints list for May 29.