No rush on ROTC 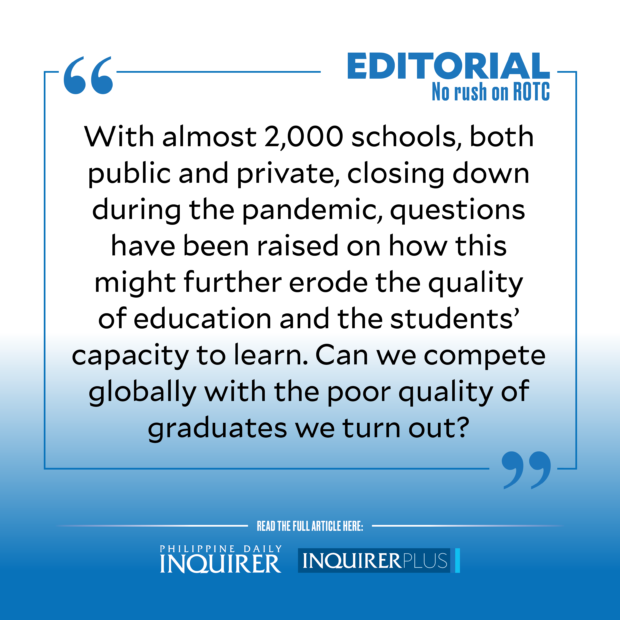 In January this year, then Davao City mayor Sara Duterte-Carpio said that if she wins the vice presidency, she would use her office to push Congress to make military service mandatory for all 18-year-olds in the country.

ROTC, which used to be compulsory in college, was made optional in 2002 following public outrage at the death of University of Santo Tomas student Mark Chua shortly after his exposé on the corruption, extortion, and bribery in the institution was published in the school’s paper. On March 18, 2001, Chua’s body was found floating in the Pasig River, rolled up in a carpet, face wrapped in packaging tape, his hands and feet bound with shoelaces. Two of his assailants have been tried and convicted, while two others remain at large.

The Vice President’s stance was seen as a follow-up to an earlier proposal by her father, former president Duterte, who, in late 2018, urged Congress to enact a law that would revive ROTC as a mandatory subject for senior high school students, otherwise he would issue an executive order making it so. Such a law would “instill patriotism” and “love of country among the youth,” said Mr. Duterte. A bill supporting ROTC as compulsory among Grades 11 and 12 students in public and private schools remains pending in the House of Representatives.

Debate has so far trailed the idea of again making ROTC compulsory before students can graduate. Those who favor it agree with Dela Rosa’s rationale that it would instill discipline among students and train them to “obey orders,” while some parents contend that it would at least give millennials a better preoccupation than just their gadgets and devices. Others point to possible threats from neighboring countries, China among them, and say that even this abbreviated military training could help us prepare our own defense.

Objections, meanwhile, range from the extra expense that this weekend exercise would entail and the time wasted that could be better spent preparing for the incoming week’s classes, to ROTC’s dark history and how external threats are best handled with diplomacy.

Lost in the flurry of rationalization and objections is the education crisis that the DepEd secretary should focus on if the Philippines were to recover from its lowest ranking in the Trends in International Mathematics and Science Study 2019 (TIMSS). Published in December 2020, TIMSS showed that Filipino children ranked lowest among 58 countries in an international assessment for mathematics and science for Grade 4 students.

Over two years into the pandemic, and despite the gradual reopening of face-to-face classes, the impact of long lockdowns on children’s education has become evident in the country, where lack of access to gadgets and slow internet connection have made online classes a nightmare for most students. Several other reports have highlighted the slide in the country’s quality of learning amid the pandemic. A World Bank report titled “Remote Learning During COVID-19: Lessons from Today, Principles for Tomorrow” found that, as of March 2021, distance schooling in the Philippines covered only 20 percent of households with schoolchildren, the lowest rate alongside Ethiopia, one of the world’s poorest countries.

To be fair, the education crisis has been evident even prior to the pandemic. Results of the Programme for International Student Assessment tests in 2019 by the Organisation for Economic Co-operation and Development showed that Filipino students fared worst among 79 countries in reading comprehension, and second-lowest in both mathematical and scientific literacy.

With almost 2,000 schools, both public and private, closing down during the pandemic, questions have been raised on how this might further erode the quality of education and the students’ capacity to learn. Can we compete globally with the poor quality of graduates we turn out?

It will take a bigger and well-allocated budget, a lot of political will, and decisive leadership to pull our education system out of the morass of mediocrity it is currently in. More than the ROTC from which students from a previous era had willingly bribed their way out, improving our quality of learning certainly deserves a higher place in the education secretary’s list of priorities.