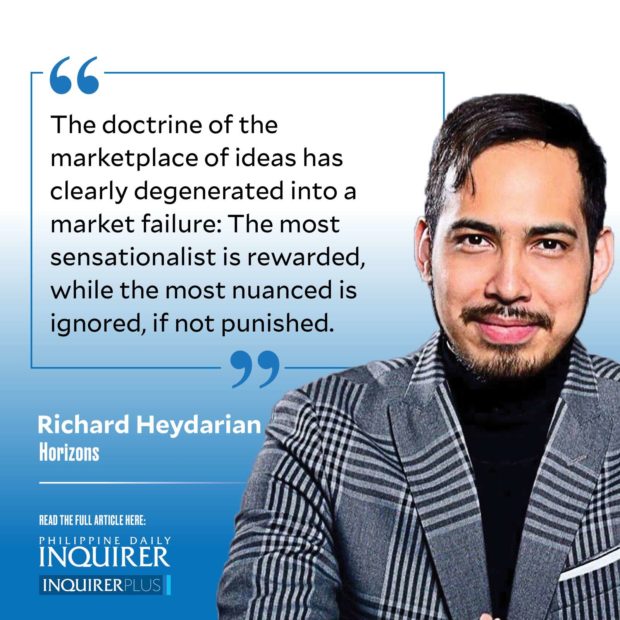 Make no mistake: The past six years witnessed “a thousand cuts” against not only one individual or organization, but actually a thousand journalists, activists, and anyone who spoke his/her political conscience. And the impending departure of the authoritarian populist in Malacañang is unlikely to change the tortuous media landscape anytime soon. If anything, a plethora of new challenges may emerge over the political horizon, thus the need for reinventing mainstream media.

I lost count of the torrent of hate messages and death threats I have received throughout the years. Not to mention the network of well-oiled “bloggers” and trolls who never tired of collectively harassing and denigrating every catchy statement I conjured in my works and social media posts.

Until recently, I got jitters whenever a motorbike passed by my car. For a while, I had to train myself against all sorts of contingencies by deploying my decade-long background in martial arts, as well as brief training in using semi-automatic rifles. There were, however, times when I almost succumbed—and began questioning everything, including my own determination to continue speaking truth to power.

I stumbled upon the politically fraught yet spiritually rewarding world of journalism not long before Rodrigo Duterte’s presidency. It all began with regular blogs on The Huffington Post, then articles for geopolitical magazines and websites worldwide over the years. At some point, local media took notice of my existence.

My career as a “political analyst,” however, really began following a 2015 interview on “Bottomline with Boy Abunda.” I think I was the only guest who described then relatively unknown Davao City Mayor Rodrigo Duterte as a “dark horse,” recognizing his breakout potential, despite dismal presidential survey ratings early on.

Over the next eight months, I chronicled every aspect of the 2016 presidential elections, including the legacy of then outgoing president Benigno Aquino III, as well as prospects for democracy under his most probable successor. In April, a month ahead of Mr. Duterte’s elections, I penned “The End of Philippine Democracy?” where I examined the roots of authoritarian populism and the extreme vulnerability of the country’s democratic institutions.

Six years later, I can barely recognize myself. Physically, I may look not much different, though entering mid-30s made me rethink my fashion and facial hair. But spiritually and psychologically, I have had to grow in leaps and bounds to maintain my inner integrity and burning passion for truth.

Surviving, perhaps even thriving, in the new and perilous political landscape necessitates recognizing the fundamental shift in our informational ecosystem. None of this—the trolls, the trashy “bloggers” and disinformation—is going away.

Hope alone is a poor strategy. It has to be met with preparation, reorganization, and dynamism. The doctrine of the marketplace of ideas has clearly degenerated into a market failure: The most sensationalist is rewarded, while the most nuanced is ignored, if not punished. Thus, meeting the challenge before us requires both personal and structural reforms.

On the personal level, journalists and public intellectuals will have to embrace genuine humility, namely recognizing their declining relevance—if not hegemony—in the new information ecosystem. For the past decade, we ignored, if not sneered at, platforms such as YouTube and, more recently, TikTok, which have become the primary source of infotainment for much of the population, especially the youth and the elderly.

As one journalist put it, “the truth is behind a paywall”—or the gates of tuition-fee-heavy universities. Countless journalists are heavily underpaid and under-protected. Meanwhile, relatively high-quality educational materials are freely available online. There are also countless influencers, who are not only as articulate and charming as high-profile news anchors, but also available to countless viewers in a much more spontaneous and (seemingly) authentic manner.

In short, we need to make journalism “cool again.” Mainstream journalists should also learn to become “good bloggers,” combining journalism’s ethics with the dynamism of cutting-edge influencers. We also need to focus on “healthy positivity,” namely positive, uplifting, and inspiring news rather than just obsessing over real and imagined social ills and political scandals. Truth has to become our vocation—and a rewarding and inspiring one at that.