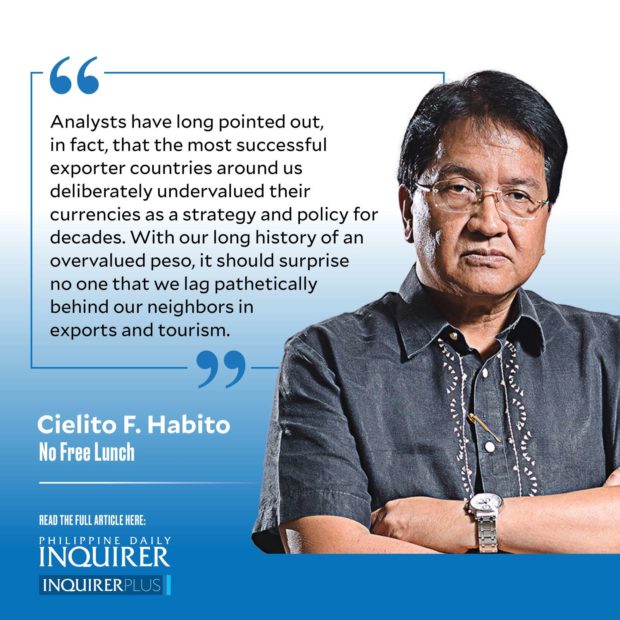 The Bangko Sentral ng Pilipinas (BSP) has been criticized—wrongly, I think—for being “dovish,” “behind the curve,” or not acting fast enough in response to speeding inflation and exchange rate movements. It seems to me that economists (as against financial analysts) tend to better understand the BSP’s moves, especially as its top leaders in the governor, deputy governor, and Monetary Board positions have increasingly been drawn from professional economists.

Bankers used to be favored to head the country’s central bank and serve in the Monetary Board, seemingly on the misplaced notion that the job is mainly about supervising and regulating the country’s banks. But monetary policy—the decision on how much money should circulate in the economy—is too complex to entrust to bankers, unless they are also well-grounded in economics. The economy has so many interlinked moving parts, and the central bank’s monetary policies are far-reaching and complex. That is why the chairman of the Federal Reserve Bank of the United States is consistently drawn from the economics, not banking, profession.

It is, thus, welcome news that BSP Governor Ben Diokno, who will soon become secretary of finance, will be replaced by Dr. Felipe Medalla, another competent economist who has served in the Monetary Board for over a decade. Like Diokno, he is a Ph.D. economist, and was my immediate successor as head of the National Economic and Development Authority in 1998, which makes him a truly seasoned economic policymaker. He well understands the delicate balancing act the BSP constantly does to keep prices stable, sustain growth in jobs and incomes in the economy, and ensure a strong financial system. Medalla has already given us a foretaste of his monetary policy perspective in a recent interview, where he declared: “What we care [more] about is Philippine inflation, not the exchange rate.” He certainly doesn’t mean that the exchange rate is unimportant, but points out that like other central banks worldwide, BSP’s primary focus is on managing inflation. But he also understands that a depreciating peso is not necessarily bad.

Economists like me constantly challenge tempering the expansive notion that having a “strong” peso (or a low peso-dollar exchange rate) is a good thing. It benefits some but likely hurts more. Obvious gainers are consumers of imports and import-dependent products, as the peso cost of imports falls. For Filipino tourists, it gets cheaper to visit Hongkong Disneyland than, say, Bohol or Boracay. Our investors also find it cheaper to invest (and create jobs) abroad rather than here at home. Also, winners are those who must pay back foreign loans, including the government itself, but it also faces lower peso revenues from import duty collections (I’ve been told before that the effect is largely neutral for the government).

What about a depreciated peso? (I studiously avoid using “weak” or “strong” to describe a currency precisely because of the misleading connotation.) Winners include producers, especially exporters, who get more pesos for every export dollar earned. But not only exporters and their workers win; it also helps those selling domestically as competing imports get more costly. Foreign tourists find it more attractive to visit us while our own tourists must spend more to go abroad, thereby helping our tourism sector. Foreign investors also find it cheaper to invest here, especially in export-oriented ventures, while it gets costlier for Filipinos to invest and bring jobs abroad. In the end, our job-hungry workers are winners, not to mention families of our overseas workers, whose remittances convert into more pesos than before—and this goes on to benefit the sellers of the goods and services they buy.

Analysts have long pointed out, in fact, that the most successful exporter countries around us deliberately undervalued their currencies as a strategy and policy for decades. With our long history of an overvalued peso, it should surprise no one that we lag pathetically behind our neighbors in exports and tourism.

I would trust the BSP. They know what they’re doing.