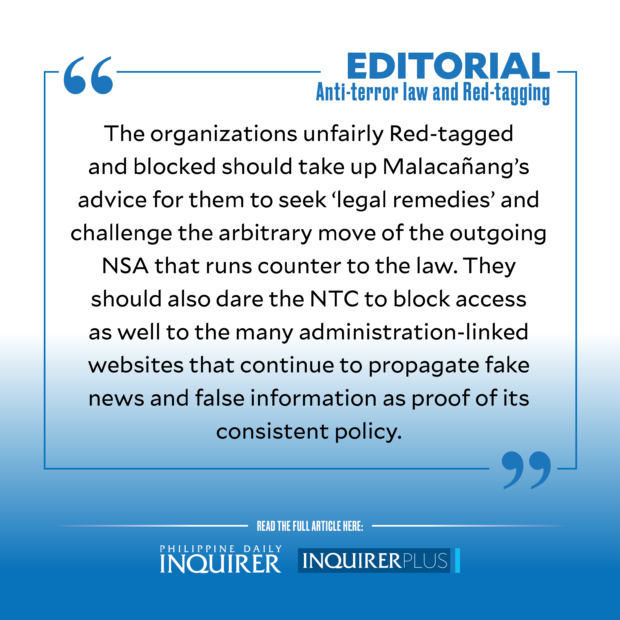 Have all those fears about the anti-terrorism law being used to go after government critics and stifle legitimate dissent finally come to pass? It would appear so, following the outgoing administration’s last-ditch move to block internet access to groups it had accused of being communist fronts or terrorist groups.

The National Telecommunications Commission (NTC) last week ordered the country’s internet service providers to block the websites of 25 organizations on the request of National Security Adviser (NSA) Hermogenes Esperon Jr., who described the groups as being “affiliated to and are supporting terrorists and terrorist organizations.”

In his request, Esperon claimed that the groups “have established a pervasive online presence through their websites that they continually use to publish propaganda and misinformation campaigns to malign the Philippine government, recruit new members, and solicit funds from local and international sources.”

The chair of the Anti-Terrorism Council (ATC), which oversees the implementation of the controversial law enacted in 2020, said the ATC had earlier designated the Communist Party of the Philippines (CPP), New People’s Army (NPA), and the National Democratic Front of the Philippines (NDFP) as terrorist organizations.

But CPP chief information officer Marco Valbuena said only seven of the 25 websites that Esperon had ordered blocked were directly linked to the CPP-NPA-NDFP, including the website of CPP founder Jose Maria “Joma’’ Sison.

So why has Esperon included independent media organizations Bulatlat and Pinoy Weekly, and legal progressive groups like Save Our Schools Network, the Rural Missionaries of the Philippines, Pamalakaya Pilipinas, and Amihan National Federation of Peasant Women, among others, in his list?

Were outspoken groups and critical media specifically being targeted?

Media organizations have rightfully denounced the inclusion of Bulatlat and Pinoy Weekly in the list as the action could have “a chilling effect” on how news about government action and misdeeds is reported. The two alternative news sites, which report on issues about marginalized sectors, were previously subjected to similar cyberattacks traced to the Department of Science and Technology and the Philippine Army.

Bulatlat expressed alarm “that such arbitrary action [could] set a dangerous precedent for independent journalism in the Philippines,” while Pinoy Weekly considered Esperon’s order as “an affront to the people’s right to information.’’

Indeed, Esperon has offered no proof of the supposed links of these news sites and legal organizations to the CPP-NPA-NDFP, nor of their acts of terrorism in publishing reports relevant to their readers. Since when has journalism become terrorism?

The Integrated Bar of the Philippines said as much, citing the NTC’s lack of authority to order the blocking of the news websites and said that “[s]uch a drastic move can’t be anchored on statements that in court would be treated as hearsay.” Neither did Esperon give the blocked sites due process as required by law.

The order also smacks of double-standard and hypocrisy since Esperon had accused the websites of spreading disinformation about the government, while supporting Undersecretary Lorraine Badoy, spokesperson of the National Task Force to End Local Communist Armed Conflict, who had notoriously been spreading disinformation against those deemed critical of the government.

Last week, another group of doctors asked the Professional Regulation Commission to suspend Badoy’s medical license for Red-tagging fellow doctors and health care workers who have lived up to their sworn duty to provide medical attention to those who need it, regardless of their political beliefs. Badoy faces at least four separate complaints before the Ombudsman, one of which was for linking outgoing Vice President Leni Robredo to the CPP-NPA-NDFP during the recent election campaign. The Office of the Vice President had provided telemedicine or free eConsulta services to supplement the government’s woefully inadequate pandemic response.

The unfairly Red-tagged and blocked organizations should take Malacañang’s advice to seek “legal remedies” and challenge the arbitrary move of the outgoing NSA that runs counter to the law. They should also dare the NTC to block access as well to the many administration-linked websites that continue to propagate fake news and false information as proof of its consistent policy. Finally, they should take up incoming NSA Clarita Carlos on her promise to put an end to Red-tagging that, she says, “is not productive” at all. Considering that Red-tagging has abetted and resulted in countless arbitrary arrests, detention, and the suspicious deaths of activists, lawyers, and rights defenders, Carlos’ intended policy shift is a welcome prospect.