Of oaths, vows, and pledges 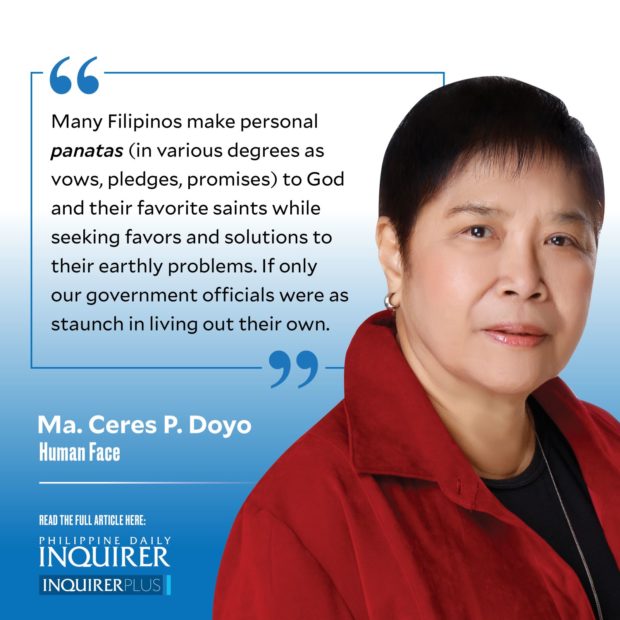 Countless newly elected officials of this benighted republic are taking their oaths before their personal choices of magistrates, government biggies, and whatnot. Of course, we do not always know the reasons for their choices, but one thing we often see in the photographs is the Holy Bible (or the Holy Quran, perhaps) on which the oath-taker’s left hand rests while the right is raised.

A photograph of outgoing Davao City mayor and Vice President-elect Sara Duterte, who took her oath on June 19 (a surprising 10 days ahead of the presumptive President-elect Ferdinand Marcos Jr.’s oath-taking on June 30), showed her left hand on what looked like a gold-edged Bible that her mother was holding. I could not tell the Bible version but it looked brand new. If I were the one, I’d much rather choose a dog-eared Bible, perhaps preloved, preowned, its pages crawling with highlights and markings and with traces of DNA.

Another kind of oath-taking will be taking place on June 30, this one led by victims-survivors of the Marcos dictatorship (1972-1986). “Panunumpa Para Sa Bayan” (oath taking for the nation), it is called, “oath-taking to guard against tyranny, falsehoods and the trampling of people’s rights and freedoms” as the invitation says.

I did sit in on the discussions and how “panunumpa” was the word chosen instead of the stronger double entendre “pagsusumpa,” The two words derive from the Filipino word sumpa, which means a solemn promise or vow but which also means a curse or swear/cuss word. With loathing one could say, “What you did is kasumpa-sumpa!” (curse-worthy). Or “Isinusumpa kita!” (I curse you!). But then, two people in love make a sumpaan before the altar of God or in the moonlight. The Filipino kundimans are dripping with the sumpaan hanggang libingan theme that brings to mind star-crossed lovers and lovelorn Maria Claras of yesteryears.

The discussions sometimes turned hilarious, despite the planned event’s seriousness. Panata (pledge) was deemed not strong enough, and pangako (promise) was never in the discussion.

The words “oath,” “vows,” and “pledge” crowd my mind with images of broken pieces; how public officials who had sworn to be servants of the people ended up serving their own interests instead. One could make one’s oath of office on hallowed grounds with hand on the Bible and still end up serving mammon instead.

Eminent historian Ambeth Ocampo on the opposite page reminded me that two Philippine presidents—Gen. Emilio Aguinaldo and Joseph “Erap” Estrada—pronounced their oaths at the historic Barasoain Church in Malolos. How could one not think of them as making sacred vows as well? Both presidents, alas and alack, did not finish their terms, with the latter convicted for plunder and sentenced to reclusion perpetua until…

The word “oath” has a legal ring to it, while a vow conjures up the sacred and divine.

Speaking of vows, last Sunday, I watched a live-streamed profession of vows—one temporary, the other final—of two missionary religious sisters who belong to a monastic order known for its observance of liturgical practices that inspire awe and reverence. The raising of both hands as in surrender, the prostrating on the floor symbolizing the total giving of self—how I wish our elected officials would do the same to dramatize their intent to serve truly. Alas, to paraphrase a common saying, the one hand that goes up and the other that is on the holy book during oath-taking would later no longer know what they are doing separately. One on the take, the other goes into the pocket.

I remember the eminent historian chanting “Suscipe me, Domine” at the altar when he made his temporary vows as a monastic years ago. Then, with both hands on his chest to implore God’s help, “… et non confundas me in ab expectatione mea.” Would that the elected do the same.

Every day, in good weather, local officials and their underlings are present at flag-raising and the singing of the national anthem, and if time permits, they, like school children, make the pledge (panata) of allegiance to the flag and the motherland. The rest of the day could be twilight zone where deals and exchanges are made, when “pastillas” are offered and received. But pledge or no pledge, there are countless upright public servants worth emulating.

Many Filipinos make personal panatas (in various degrees as vows, pledges, promises) to God and their favorite saints while seeking favors and solutions to their earthly problems. If only our government officials were as staunch in living out their own.