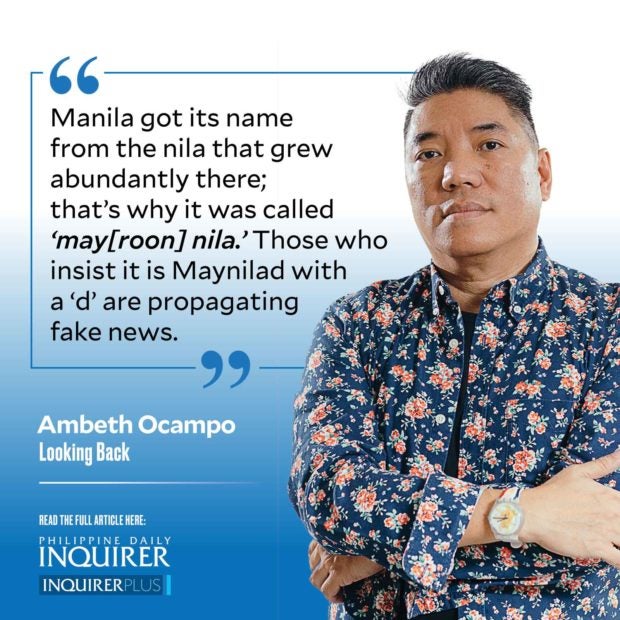 Every year on June 24, Araw ng Maynila, I reflect on two things: first, the foundation of Spanish Manila; second, why is it that when we talk of Maynila or Manila today, it is always in the past tense?

When the late Carmen Guerrero Nakpil was chair of the Manila Historical and Heritage Commission, she attempted to reorient the narrative by declaring, with a wry smile, that the “Araw ng Maynila” should rightfully be called “Araw ng Kastila.” Each year, when Manila “celebrates” the foundation of the city on June 24, 1571, it obscures the fact that the Spanish, under Miguel Lopez de Legazpi, merely conquered an existing city, Maynila, from Rajah Soliman. When we visit Fort Santiago today, we must not forget that its foundations were piled upon the ruins of Soliman’s palisades. At the time of the Spanish conquest, there were other settlements around Manila, each ruled by other chieftains. Archeological artifacts excavated in downtown Manila like stone and jade tools suggest settlements by the Pasig in prehistoric times. Chinese porcelain found in archeological sites are a record of our long relationship with China that stretches far back to the 9th century. That’s over a millennium of contact. Philippine history should be taught to provide citizens with a long view that stretches beyond 1571, when Manila was founded as a Spanish city, the capital of the Philippine Islands.

Manila got its name from the nila that grew abundantly there; that’s why it was called “may[roon] nila.” Those who insist it is Maynilad with a “d” are propagating fake news. One “historian” cited Manuel Blanco’s “Flora de Filipinas” (first edition, 1837) as the source for Maynilad, but when you look at the beautiful colored plate from a later edition, the green plant is labeled as “Ixora manila” that botanists say is a synonym for Scyphiphora hydrophylacea C.F.Gaertn. I wish Manila City Hall cultivates nila so people can see it live. When I was president of the City College of Manila, now Universidad de Manila, I lifted an image of the nila from Blanco’s “Flora de Filipinas” and put it on the college seal. I hope to see a nila before I die, because I have seen other historical plants like kiyapo as ornamental in many urban gardens. This green aquatic plant with water repellent leaves gave its name to the Manila suburb known as Quiapo.

During the pandemic, I spent a lot of time downloading high-resolution images of early Spanish maps of Intramuros and its suburbs (arrabales) from the Archivo General de Indias in Seville, Spain, for my research and enjoyment. These maps taught me that Manila is not the Manila, Greater Manila, or Metro Manila we know today. Instead, Spanish Manila was just “intra-muros,” literally the area “within the walls.” Familiar parts of Manila today were previously “extra-muros,” or outside the walls of Intramuros, and were considered suburbs or arrabales of the capital city: Binondo, Ermita, Intramuros, Malate, Manila, Pandacan, Quiapo, Sampaloc, San Andres, San Fernando de Dilao, San Miguel, San Nicolas, Santa Ana de Sapa, Santa Cruz, Santa Mesa, and Tondo.

In 1901, the early days of the American period, parts of Spanish Manila were remapped and some of its old districts were made to form Rizal province: Caloocan, Las Piñas, Mariquina, Pasig, Parañaque, Malabon, Navotas, San Juan del Monte, San Pedro de Macati, San Felipe Neri, Muntinlupa, and the Taguig-Pateros. Before the Japanese Occupation, Manila and Quezon City were merged into Greater Manila that included Rizal province as detailed above. In 1975, during the first Marcos period, Metropolitan Manila was created from the merging of Manila, Caloocan, Pasay, Quezon City, Las Piñas, Makati, Malabon, Mandaluyong, Marikina, Muntinlupa, Navotas, Parañaque, Pasig, San Juan, Taguig, Valenzuela, and Pateros. This was renamed the National Capital Region in 1978.

With other maps available online from the Library of Congress, Washington, DC, and the British Library, London, it is possible to compare different maps of “Manila” over the centuries and trace the growth and development of the capital city to the present. So then we ask: What has happened to Manila? Why do we speak of it in the past tense?