Wrestling against powers and principalities 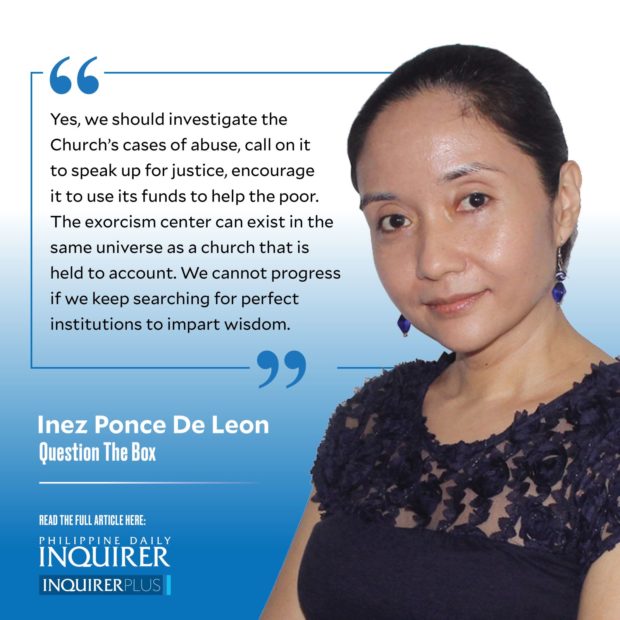 A few weeks ago, the Archdiocese of Manila announced that it would build the Saint Michael Center for Spiritual Liberation and Exorcism. The announcement felt like a blast of sunshine: I’ve been writing a series of novels about exorcism for years now, and I’ve immersed myself in research surrounding the rite.

My work is inspired mainly by seminars I attended at Purdue University while completing my doctorate. At the helm was Fr. Vince Lampert, exorcist of the Archdiocese of Indianapolis. The Vatican and its affiliated universities began offering exorcism courses in the early 2000s in response to the growing demand for exorcists. Fr. Vince was one of the first alumni.

I remember Fr. Vince as gentle, yet never drowned out by the crowd. His first words were: “I’m an exorcist, and I’m always the biggest skeptic.” He did not immediately diagnose all his cases as possession. He did as he had been taught at the Vatican: consult with doctors and psychiatrists, always work with a team, discern, and engage in the solemn ritual with the notion that no power is your own.

Fr. Vince explained that exorcism itself is neither instant nor overblown, as Hollywood portrayed it. “However, I now know the very real fear of seeing a tiny Italian grandmother suddenly stand up, lift a solid metal table, and fling it at me from across the room,” he added. This prompted laughter and warmth in his hitherto cold audience, and led to a three-hour talk that silenced the once mumbling, tittering crowd.

Fr. Vince was serene as he shared his experiences. He talked about the young man who withdrew from his family and locked himself up in his room. Fr. Vince arrived with his team, and was about to knock on the boy’s door, until the walls growled: “Get out.”

He talked about another priest whose ministry included visiting an institution for the criminally insane. The priest would always enter to the tune of snarling patients, and exit to the very same patients sweetly chorusing, “Goodbye, Father!” The difference? He would always enter with consecrated hosts in his pocket for Mass, and would leave with his pockets empty.

“How can I tell if I’m possessed?” someone asked during the Q&A.

“If you wake up speaking Ancient Greek and Latin, then you should see me,” Fr. Vince joked, drawing more laughter from the room. Then, he grew somber and answered the question with the same spirit that I saw in all the research materials that I read after, the same ideas that later became the backbone of my novel.

Satan is the father of lies. His demons thrive in places where the truth is suppressed, where lies masquerade as enlightenment. Satan does not cause people to sin. People’s free will drives them to wrongdoing, accept lies as truth, give in to their weaknesses, and forget God’s mercy. It is these conditions that can lead to possession.

It was only later that I realized the far-reaching implications of the words: No lie is ever harmless, no sin is ever private. Even the lies we tell ourselves are destructive. They force our gazes inwards so that our lives become about ourselves rather than what we can do for someone else. We, then, focus on what we are entitled to, how the world can appear better to us, and who must adapt so that we are always in a place of comfort.

The online backlash to the new exorcism center is alarming but understandable. Yes, we should investigate the Church’s cases of abuse, call on it to speak up for justice, and encourage it to use its funds to help the poor. The exorcism center can exist in the same universe as a church that is held to account. We cannot progress if we keep searching for perfect institutions to impart wisdom.

Perhaps, the backlash was due not only to a misinterpretation of the nature of exorcism and care of Hollywood but due to an assumed judgment on us all: that we are helpless, invaded by demons, reliant on superstition to carry us through.

On the contrary, the whole ministry of exorcism is systematic and interdisciplinary. The center, like the Vatican course, removes the drama from the rite so that it can teach us the value of living in truth—so that we remember that every day, we wrestle against both our nature and temptation, and we must put on all the armor we can muster to keep up the fight.