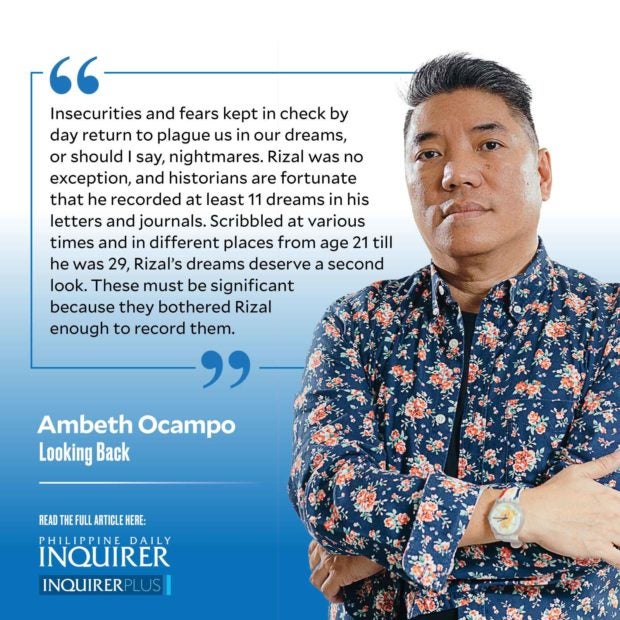 The way Araling Panlipunan is taught, with an emphasis on civics rather than history, students are led to believe that every waking moment in the lives of our heroes and patriots was devoted to the love of country. I’m sure historical figures had other concerns, like earning a living or raising children. They fell in and out of love and made daily decisions like us, from choosing the shirt to wear to work to what to eat for breakfast.

When I first read the 25 volumes of Jose Rizal’s collected writings, I dug up his dreams. Psychology 100 in college taught me that the conscious gives way to the unconscious when we sleep. As a result, insecurities and fears kept in check by day return to plague us in our dreams, or should I say, nightmares. Rizal was no exception, and historians are fortunate that he recorded at least 11 dreams in his letters and journals. Scribbled at various times and in different places from age 21 till he was 29, Rizal’s dreams deserve a second look. These must be significant because they bothered Rizal enough to record them. Unfortunately, I am not competent to hazard an interpretation and have to sit down with a psychiatrist one day to provide context to each dream.

When Teodoro A. Agoncillo lectured me on Rizal as a “conscious hero,” he painted a man who knew his place in history and embraced his destiny. I saw it differently knowing Rizal’s precognitive gifts. When he was a first-year medical student at the University of Santo Tomas, he dreamed that he was taking an exam, an exam he was preparing for days earlier. When he woke up, he remembered the exam questions in the dream but didn’t give them much thought. When he finally sat for the exam, he was surprised, and delighted, of course, to find the dream questions in the actual exam. As a teacher, I don’t know if this counts as cheating. I do know I will not waste that gift on exam questions; I would use my powers to divine winning lotto numbers.

When Rizal related the above experience to his elder brother Paciano, he recalled that one night, after Simbang Gabi, Rizal dreamed about their family going through a period of trouble, but everything was vague. It wasn’t clear to Rizal whether the family would lose or gain from this “kaguluhan.” Paciano, was similarly gifted; in a letter dated Dec. 29, 1882, he admitted to having similar dreams but was clear as to the outcome: misfortune and hardship. At the time, Paciano dismissed this saying: “I’m not much of a believer in dreams that occur in the darkness of sleep, I cannot believe in it, although all this can happen.” Years later, their family would be embroiled in an agrarian dispute with the Dominicans. As tenants on friar lands who refused to pay increasing rent, they were evicted from Calamba.

Rizal outwardly scoffed and actually laughed at some of his own dreams, but death was a preoccupation and he believed he would die young. In a letter to Marcelo H. del Pilar, dated June 11, 1890, recounting a series of dreams with dead relatives and friends, he said: “When I was a boy, I believed that I would not reach the age of 30.” He was shot to death at age 35. Rizal concluded: “Even if I don’t believe in these things, and though my body is strong and I have no fear nor sickness of any kind, nevertheless I prepare myself for death, arranging things I will leave behind and disposing myself to any eventuality, Laong Laan, is my real name.” He expressed the same sentiments to Paciano, confiding that dreams always regulated his conduct: “Ang aking mga panaginip ay siya na lamang nagaayos ng aking mga hakbang.”

His diary entry for Jan. 1, 1883, reads: “I had a frightful nightmare when I almost died. I dreamed that imitating an actor in a scene in which he dies, I felt vividly that my breath was failing and I was rapidly losing strength. Then my vision became dim and dense darkness like that nothingness overpowered me: the anguish of death. I wanted to shout and ask for help … feeling that I was about to die. I woke weak and breathless.”

This dream is classic bangungot. Uncanny because it occurred on Dec. 30, 1882 or 14 years to the day he was executed in Luneta.