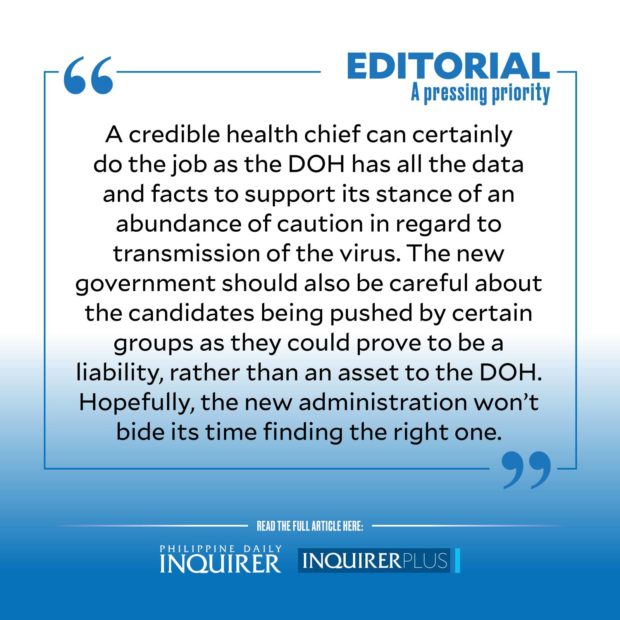 What’s taking the incoming administration too long to appoint the next health secretary?

Surely there are other individuals blessed with medical and administrative skills more qualified and capable than the current health chief, who had blithely ignored deafening calls for his resignation, no thanks to the enabling support of his patron, outgoing President Duterte.

In August 2020, a Senate hearing called for Health Secretary Francisco Duque III’s ouster for his possible role in the P15-billion corruption scandal at the Philippine Health Insurance Corp., as its former president and board chair. Almost two years after the exhaustive hearing, the state insurance firm has yet to exact accountability from officials involved in the scandal that saw billions lost in members’ contributions through fraudulent, often nonexistent, medical procedures in selected and favored hospitals.

In February this year, a Senate panel recommended the filing of charges against the health official and several others for the allegedly anomalous purchase of COVID-19 equipment and supplies from Pharmally, an undercapitalized Chinese company. Duque, the partial report by the Senate blue ribbon committee stated, had moved over P40 billion from his agency to the Procurement Service of the Department of Budget and Management to supposedly hasten the delivery of the medical supplies, which later turned out to be substandard and grossly overpriced. Such reckless handling of public funds intended for the government’s pandemic response has contributed to the country’s outstanding debt now standing at P12.68-trillion as of end-March 2022.

Finding a competent health secretary should be a priority by the incoming administration, given several health situations that could endanger health and lives. And we’re not just talking about COVID-19, because although the virus is still very much around and Metro Manila has a “continued increase” in the number of cases in 11 cities, the National Capital Region remains under low risk, according to the Department of Health (DOH).

Outside the metro, however, recent developments have been less than reassuring. ThPhileere’s that arsenic contamination of groundwater in nine areas in Batangas, with some 5,000 residents who may be at risk, authorities said. A task force created to handle this health hazard has said that signs of contamination in wells were first observed after Taal Volcano’s eruption in January 2020. According to Health Undersecretary Maria Rosario Vergeire, drinking water contaminated with arsenic could adversely affect one’s health, and in severe cases, could cause death.

While local government units (LGUs) have handled the crisis as well as they could—providing bottled water to residents, setting aside P3.5 million for conducting more tests, looking into the reverse osmosis process to purify the water supply, and seeking to place Balete, Batangas, under a state of calamity to access more funds—a more comprehensive health plan is needed to address the problem in the long term. An extensive information campaign spearheaded by a health chief vested with official authority can answer the questions that worry residents the most: Who are most at risk? How do people mitigate those risks? Where and how can households source safe drinking water? What are the symptoms of arsenic and radon poisoning? What treatment is available for those affected? How can local health centers respond more effectively to identified cases? With more resources at his or her disposal, a health chief appointed on merit can draw up a response plan that addresses the urgent needs of residents while anticipating worst-case scenarios.

In Sorsogon, the phreatic explosions of Mount Bulusan in the past two weeks have unleashed a totally different but just as worrying health hazard: ashfall which contains toxic sediments that can cause difficulty in breathing and worsen respiratory problems. While the LGUs and several government agencies have taken charge of warning and evacuating residents who are within the four-kilometer permanent danger zone and providing them the needed provisions and services, the national government must take a more proactive role, especially with regard to the health of those who are exposed to or have inhaled the toxic ash. As well, a comprehensive health awareness campaign can give people better and safer ideas on how to cope with a situation that remains highly fluid and far from ideal.

In Cebu, the bickering between its governor and task force COVID-19 officials over the mask mandate can do with a more health-oriented approach instead of the belligerent hierarchical turn it has assumed lately. A credible health chief can certainly do the job as the DOH has all the data and facts to support its stance of an abundance of caution in regard to transmission of the virus. The new government should also be careful about the candidates being pushed by certain groups as they could prove to be a liability, rather than an asset to the DOH. Hopefully, the new administration won’t bide its time finding the right one.