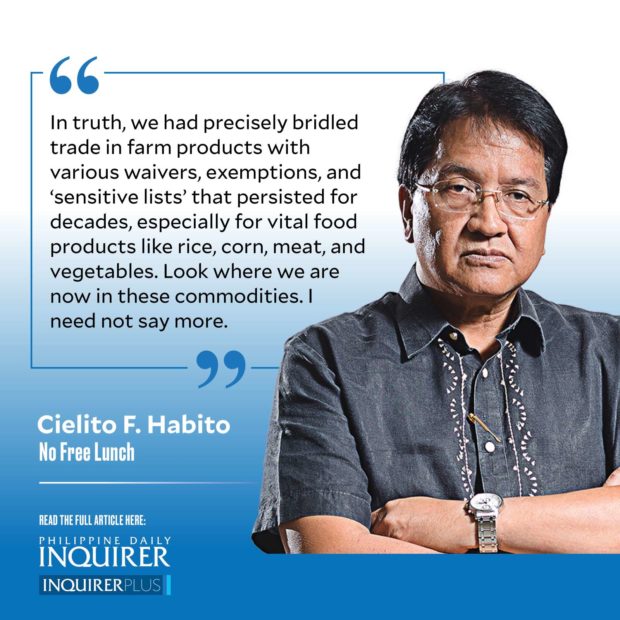 Albay Rep. Joey Salceda, a substantive politician I’ve long admired, spoke recently at the University of the Philippines Los Baños on “a new framework for food security and agricultural development,” and had interesting insights worth sharing. I particularly appreciate how he always makes good use of well-researched data, and while his 200-slide PowerPoints give some audiences nosebleed (and the UPLB emcee admitted as much), his evidence-based arguments permit him to speak with authority. That’s why my staff at the National Economic and Development Authority (Neda) in the 1990s found him a pleasure to work with. As a newly minted politician having recently switched from an investment banking career then, he spoke the language of economists and constantly challenged Neda’s professionals to argue their policy positions right.

What particularly resonated with me were three “myths” he blamed for clouding people’s approach to dealing with what I call our economy’s true backbone: our agriculture and agribusiness sector. To his three myths, I add one of my own below.

The first myth Salceda busts is the common view that we do not provide enough resources to support our farmers. But cross-country data compiled by researchers at the Organisation for Economic Co-operation and Development (OECD) show that in the Philippines, producer supports in 2020 represented 27 percent of gross farm receipts, averaging 22.2 percent over 20 years. This is much higher than in Vietnam (-6 percent in 2020, average of 1 percent), Indonesia (20 percent in 2020, average of 14.7 percent), and China (12.2 percent in 2020, average of 10.9 percent). OECD defines these supports as market price support, budgetary payments, and cost of revenue foregone, such as from tax exemptions. The problem appears to lie in the form of support we give our farmers, mostly in terms of trade protection via import restrictions and high tariffs, which OECD puts at 40 percent, well above Vietnam’s—10 percent and Indonesia’s 24 percent.

Salceda notes that not only is Vietnam not supporting its farmers; it is also taxing them for exporting their produce—yet far outdoes us and Indonesia in farm performance. I’ve long argued that we should help our farmers more via nurturing, rather than shielding or “protecting” them from the competition, not because we’d rather rely on imports, but to have the market discipline push us to keep abreast with our neighbors’ productivity.

Salceda’s second myth is the oft-heard alarm that we are losing our farmlands. He cites World Bank data indicating that our agricultural area as a percent of the total land area actually grew continuously from 25.9 percent in 1961 to 41.7 percent in 2018. Cross-country data also show that our total cultivated land (36 percent of total) is already twice what is classified as arable land (18.2 percent of total), whereas the former only slightly exceeds the latter in our neighbors. He muses that this probably explains why some of our farmlands have low efficiencies.

The third myth is the complaint that our government has not done enough to make farm inputs cheaper. He shows how our tariffs on key inputs including fertilizers, pesticides, seeds, and farm machines, are already down to the minimum level of three percent, from as high as 46 percent in the 1980s. The Department of Agriculture has also perennially procured such farm inputs directly to pass on cheaply to farmers (at taxpayers’ loss). Our problem has been that the government has focused support on private goods or direct farm inputs, where the benefits last for only one crop season, but falls short on public goods with long-lasting benefits like irrigation, postharvest facilities, transport, and logistics.

I would add to Salceda’s list the misplaced complaint that “unbridled liberalization” in agriculture has penalized our farmers since we joined the World Trade Organization. In truth, we had precisely bridled trade in farm products with various waivers, exemptions, and “sensitive lists” that persisted for decades, especially for vital food products like rice, corn, meat, and vegetables. Look where we are now in these commodities. I need not say more.